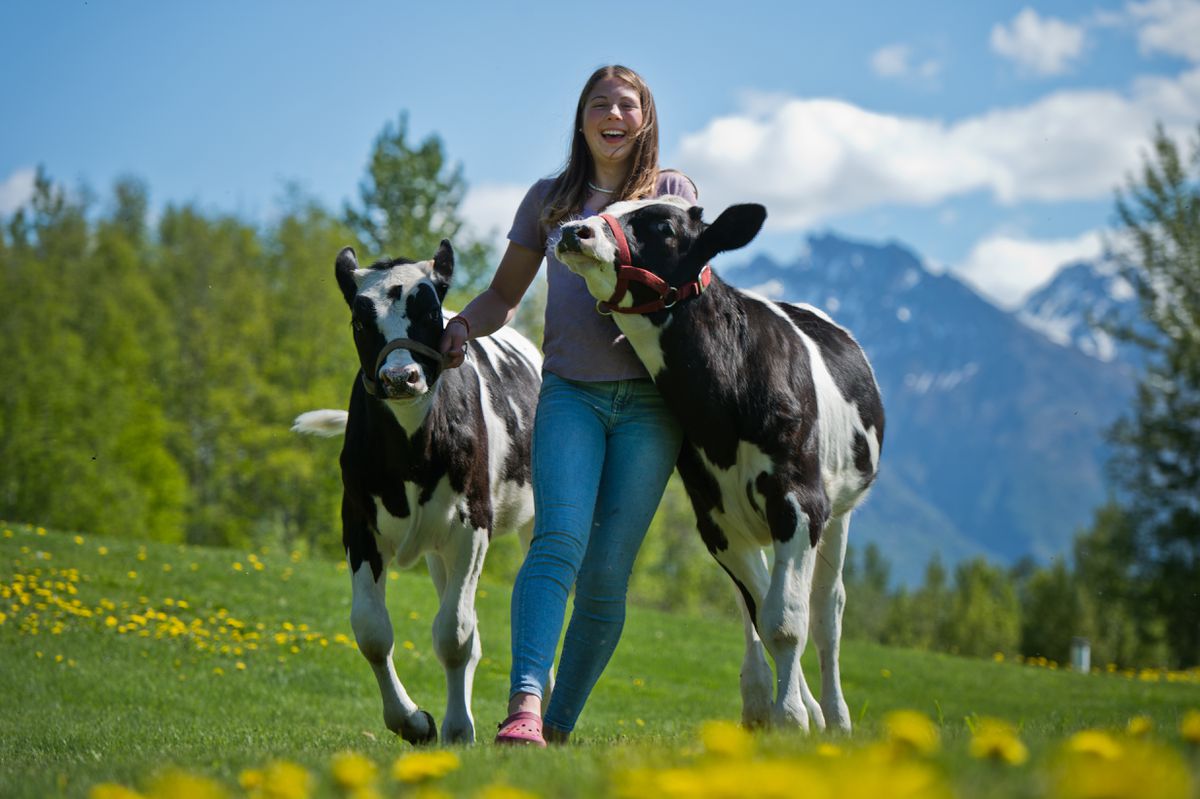 Olivia Beck, 15, holds on to her cattle Finn, left, and Forest at her home in Palmer on May 28, 2020. The calves would've shown in the young beef competition at the Alaska State Fair, she said. (Marc Lester / ADN)

Olivia Beck, 15, holds on to her cattle Finn, left, and Forest at her home in Palmer on May 28, 2020. The calves would've shown in the young beef competition at the Alaska State Fair, she said. (Marc Lester / ADN)

PALMER — Olivia Beck takes her calves for walks and feeds them a mix of livestock pellets, show-calf feed and hay.

The black and white Holsteins looked like big dogs in January when the Palmer 15-year-old got them from a nearby dairy for her 4-H project at this year’s state fair. Now Finn and Forest are pushing 300 pounds. They’ll be at least twice that by fair time.

Only this year, there’s no such thing.

Officials last week announced that continued uncertainty surrounding the coronavirus pandemic prompted the cancellation of the Alaska State Fair for the first time in nearly 80 years.

“It’s huge,” said Beck’s mother, Teresa, who co-owns a veterinary practice in Palmer. “So many of us, it’s something we prepare for all year long.”

The late-summer ritual draws an estimated 300,000 people to Palmer’s state fairgrounds for two weeks of once-a-year menu items, piglet viewing, and some of the world’s biggest vegetables grown under Alaska’s midnight sun.

The cancellation is the first since 1942 during World War II.

The specter of COVID-19 has already done away with scores of other events including Kodiak’s Labor Day Weekend Fair and Rodeo and the Tanana Valley State Fair. The Kenai Peninsula Fair held the third weekend in August was still on as of Friday.

With the loss of the state fair in Palmer, the search is on for new ways to hold some kind of alternative event — or multiple events — that bring together crowds, food, vendors, vegetables and farm animals without running afoul of whatever COVID precautions are necessary later this summer.

Something being called the “Not Fair” is being considered for hundreds of vendors who rely on the fair’s annual shot of income.

One 2-week stint at the state fair can provide 75% of a year’s revenues. Fair officials say 40,000 to 50,000 people might stroll the fairgrounds on any given day.

A company run by a Willow couple called MATSU Events LLC is weighing the idea of putting on a large 3-day event in late August or early September for as many as 200 vendors at the Menard Center in Wasilla. The company put on last year’s Mat-Su Outdoorsman Show.

Owner Matt Rowley said several vendors reached out to him right after the fair announcement on May 22.

But first, Rowley said, he’s waiting to see how many vendors are interested and what Alaska’s governor and top health officials decide about large gatherings, an area still restricted under state mandates to curb the spread of COVID-19.

He’d already heard from 70 interested vendors within days of the cancellation. A decision will be made by June 5.

“We would love to be able to put a show together really for vendors,” Rowley said. “The fair is a big event. We’ve got no way of replicating the fair. Especially with two and a half months prep. It couldn’t be done.”

A Facebook group called “Mat-Su Community Fair 2020” formed within an hour of the fair’s cancellation announcement. Now it has 2,500 members.

One of them, Houston farm owner Jerika George, said she was invited to join within minutes of the group’s formation. Now George is a moderator and she’s looking for ways to continue the agriculture-oriented parts of the fair. Finding a property big enough and coordinating all the different planning efforts are the biggest hurdles, she said.

The group held a survey to see what kind of alternative members preferred: multiple small vendor fairs across Mat-Su; a larger fair with games and carnival rides; the Menard Center vendor fair; or the Menard event one weekend and another event at a Palmer-area racetrack another.

The multiple fairs option netted by far the most votes.

Making up even partly for the loss of the fair is “a huge deal,” George said. “To be honest, even if we had a mini fair in every city or community of the Mat-Su I don’t see it making up for the fair. The goal is to do our best to make sure those vendors have some kind of business and not take a total hit.”

State fair officials say they’re looking at putting on smaller events at the fairgrounds even if the big one can’t happen. The fair is hosting drive-in movies and food truck gatherings already.

“That is our strategy now, is to take pieces of the fair and turn them into smaller events and make them safe for the public,” fair director Jerome Hertel said this week during an interview with Radio Free Palmer, a local nonprofit radio station. He suggested a small festival, rodeo, or demolition derby

“We feel like we can ... make it a little smaller, more controlled and make people safe and feel safe about coming to an event like that,” he said.

Alaska Raceway Park owner Michelle Maynor says that large outdoor venue in Butte, up against the Chugach Mountains, is also available for anyone enterprising enough to plan an event. There are races booked most weekends but the weekend before Labor Day is open. The track is also offering space to vendors who want to sell at race days.

“It just really sucks for our community, so I’m going to help out with whatever we can,” Maynor said.

For some fair participants, the summer remains uncertain.

Golden Wheel Amusements in Chugiak supplies the rides for all the big summer fairs and festivals. This summer, the only event on Golden Wheel’s calendar is July’s Bear Paw Festival, according to chief operations manager Chase Eckert. Instead of 350 seasonal workers, the company is relying on a core group of about 20.

There will be fewer rides with more spacing between riders, Eckert said. Crews will sanitize with backpack sprayers.

He’s not sure any of the alternative events will work for Golden Wheel.

“I think that the key to it will be longer events with smaller amounts of people,” he said. “It’s unprecedented. This is a really hard year for the industry.”

Walter Chastain won the vaunted giant cabbage competition at the Alaska State Fair last year. The Wasilla grower is no stranger to the freak show that rolls out every year at the fair’s vegetable competitions. His state-record longest carrot -- grown inside a piece of PVC pipe -- topped out at just short of 6 feet.

Chastain said he started rutabaga, carrots and red cabbages already but otherwise the fair’s cancellation came before he’d gotten other giant contenders planted. He might get involved in an alternative vegetable competition, depending on the venue.

The fair’s cancellation didn’t come as a surprise but it was a “little bit of a shock," Chastain said. “I completely understand the reasoning behind it. If I said I wasn’t disappointed, I would be lying. Me along with thousands of other people were disappointed.”

Beck and other 4-H participants behind hundreds of fair projects, however, should be able to see them through this year.

Alaska’s 4-H program is run out of the University of Alaska Fairbanks and officials there say they are working on ways to hold some kind of event along with other land-grant universities in other states with canceled fairs.

“We will have a 4-H fair,” said Candi Dierenfield, interim 4-H state program leader. “It’ll probably look different. It might be virtual, it might be hybrid, but we are working on alternative plans. There will be something.”