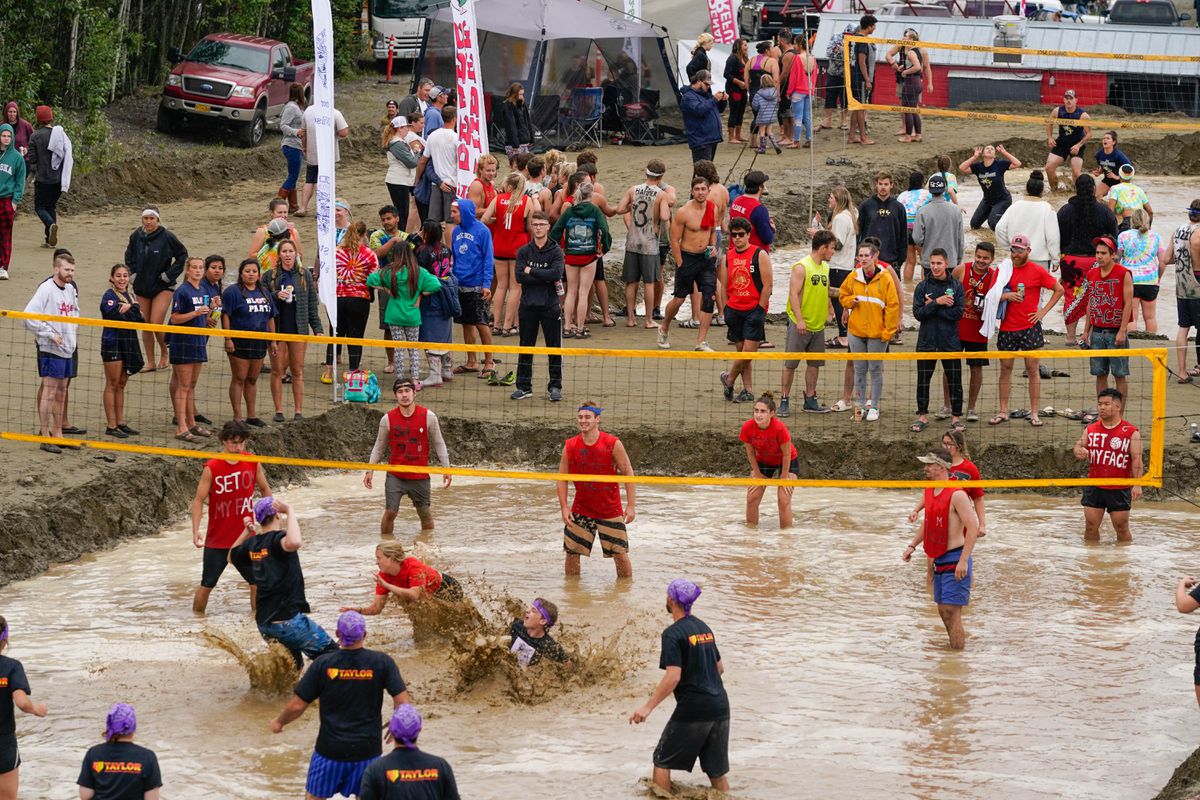 Teams compete at the Big Lake Lions 33rd annual mud volleyball tournament on Saturday, July 25, 2020 in Big Lake. The games drew over 500 people to the day-long event, which was a fundraiser for Big Lake Lions Club. (Loren Holmes / ADN)

Teams compete at the Big Lake Lions 33rd annual mud volleyball tournament on Saturday, July 25, 2020 in Big Lake. The games drew over 500 people to the day-long event, which was a fundraiser for Big Lake Lions Club. (Loren Holmes / ADN)

BIG LAKE — A sand pit filled with mud was the playground for more than 500 people Saturday at Big Lake, where 53 volleyball teams made a mess while raising money for the Big Lake Lions Club.

The 33rd annual Big Lake Lions Mud Volleyball Tournament was smaller than last year’s but still well attended, according to tournament coordinator Jaime Estes, who is in her fourth year volunteering with the event.

“Last year we had 71 teams,” she said. “Obviously this year’s a little bit different, just because we’re battling the COVID-19 pandemic.”

In a summer when many popular events have been canceled because of the virus -- the Alaska State Fair, Salmonfest, Mount Marathon and myriad smaller events -- mud volleyball went on as usual.

Estes said organizers encouraged participants to use hand-washing stations and not mingle with other teams, but acknowledged that “it’s kind of hard at a sporting event.”

“We do have concerns that it could cause an outbreak, of course,” she said. “I think a lot of people could be concerned, but you know there’s also quite a few here that obviously aren’t, as they’re still participating.”

With matches happening on four courts all day long, some teams took the volleyball part of the event seriously. But for many it is more social event than sporting event.

Blake Elder, a member of the Big Boys Toys Storage team, has been coming to the tournament for about 10 years and has placed as high as second.

“Normally there’s people that are out here, you know, drinking pretty early,” he said. “One of our strategies is we just don’t do that and that gets us pretty far into the day.”

The tournament might have been the marquee event, but the tailgate party was at least as well attended. Dozens of pop-up tents were scattered throughout the parking area, and groups gathered to socialize, playing corn hole, volleyball and beer pong.

While a handful of volunteers wore masks, almost no players were seen wearing them.

Neither the state of Alaska nor the Mat-Su Borough mandate the use of masks or limit the size of groups. The CDC warns that large gatherings, especially where participants do not wear face coverings, can increase the risk of COVID-19 transmission.

The Alaska Department of Health and Social Services website says: “At this time the State of Alaska does not mandate the general use of masks, limit group size, or business operations, but does encourage Alaskans to do their part to limit the spread of COVID-19.”

“Yeah, I saw some posters up saying to wash your hands and keep six feet apart and wear a mask,” said Elder. “If people are out here doing this, they are not too concerned about it. I mean, yeah, some people aren’t high-fiving and hugging and stuff, but other than that you can tell they’re not keeping their distance very well.”

Among the participants was a group from the University of Alaska Anchorage volleyball team, whose season has been canceled by COVID-19. Past and present players put together a team called Vegas Bombs.

“I don’t think it’s really skill because you can’t even jump or anything,” said Vanessa Boyer, who wrapped up a stellar four-year career with the Seawolves last year. “There’s not really much you can do out in the mud.”

The first year of the tournament raised money for a fire boat, she said, but now the funds go to a variety of things in the Big Lake area.