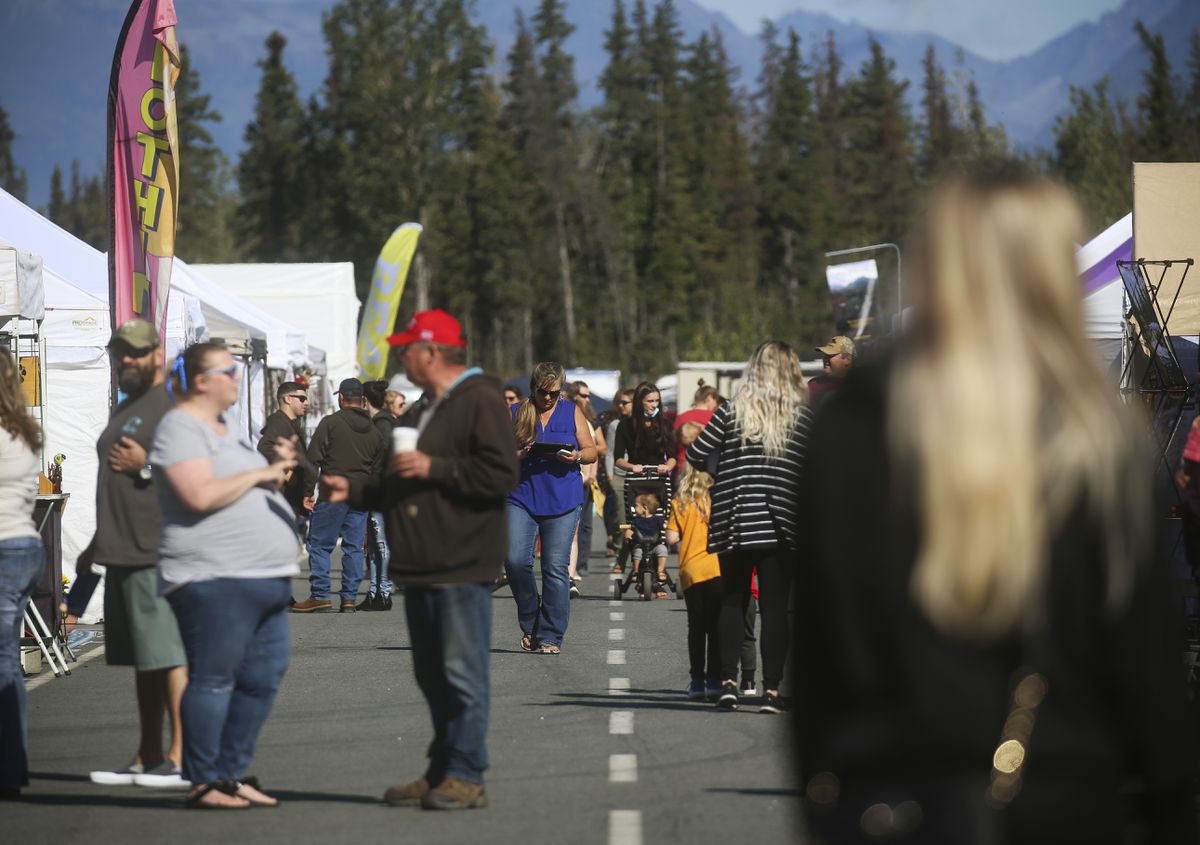 Migrating sandhill cranes heading south called out above festival grounds at the Alaska Raceway Park on Friday morning as a growing crowd gathered for the first Mat-Su Fall Festival.

The Palmer festival kicked off Friday and runs through Sunday. The event was held in lieu of the Alaska State Fair, which was canceled due to the pandemic.

The Mat-Su Fall Festival, which runs from 10 a.m. to 9 p.m. each day, on Friday featured live music, pony rides, food trucks, a rock climbing wall and an estimated 140 vendors.

“None of this is typical,” MATSU Events LLC Owner Matt Rowley said. “Those vendors were all hoping that the fair was going to be their one shot to do something.”

Rowley, whose company also runs the Mat-Su Outdoorsman Show, said they scrambled at the last minute to get the new event organized and was “conscious of the COVID precautions.” Rowley hopes to see between 5,000 and 10,000 people over the course of the weekend.

Individual bottles of hand sanitizer were provided to vendors, but the use of face masks was not required or enforced at the outdoor festival.

Live music began Friday at 6 p.m. and will continue throughout the weekend.

“It’s nothing like the fair but I think they’ve done a nice job,” Lisa Greenwood said as she manned her Twinkle Toes tent. “They made something happen. I’m glad I’m here.”

This year would have been Greenwood’s fifth year selling at the Alaska State Fair, which was her “main bread and butter of the year.” She’s been making her polar fleece slippers with non-skid bottoms for the past 30 years and due to the pandemic has had to “recoup and do things differently,” relying heavily on online sales this year.

Across the festival grounds, other vendors shared similar tales and expressions of gratitude for the hosts and the Mat-Su Borough as they sell T-shirts, pork rinds and other festival favorites.

“Mat-Su took care of business out here,” Carolyn Porter said between customers at the Mat-Su Republican Women’s Club booth. “We miss the regular people that we see year after year ... (but) we’re already meeting other people out here.”