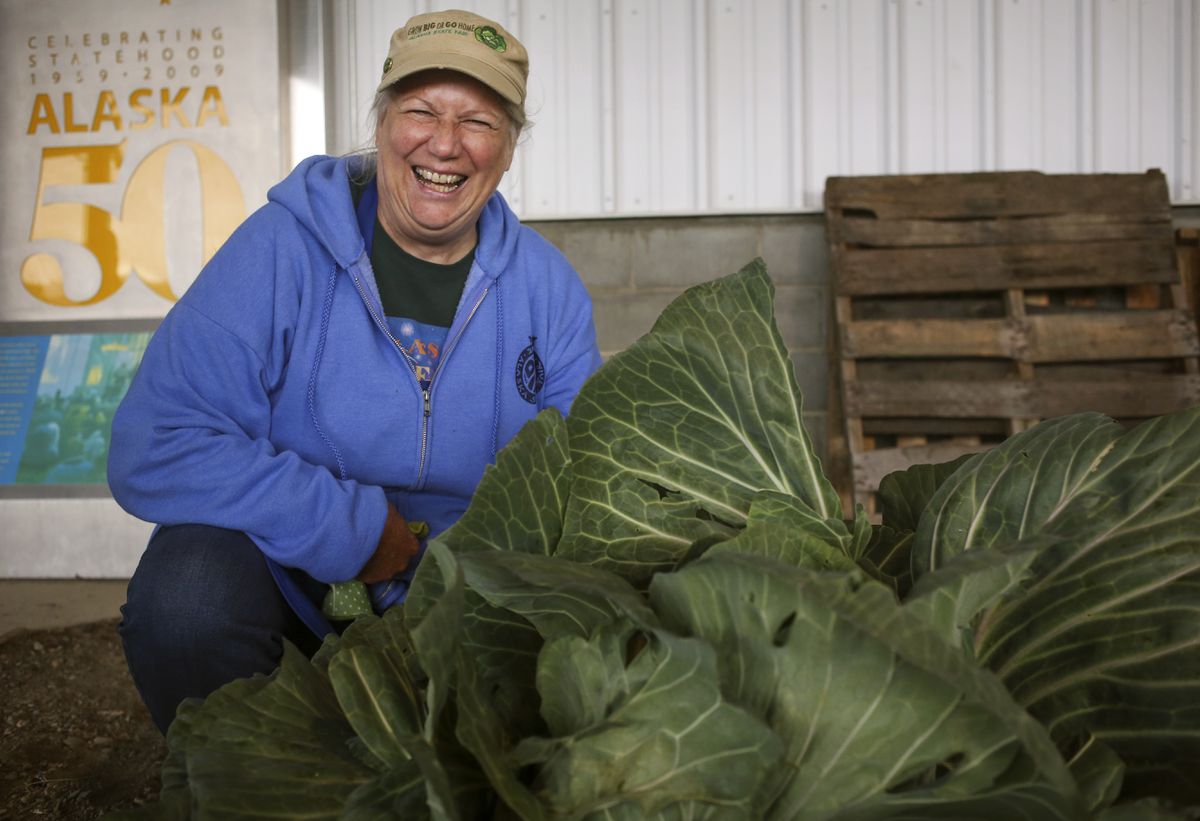 Deb Blaylock next to her 40.5-pound cabbage at the Harvest Fest 2020 in Palmer on Thursday. (Emily Mesner / ADN)

Deb Blaylock next to her 40.5-pound cabbage at the Harvest Fest 2020 in Palmer on Thursday. (Emily Mesner / ADN)

PALMER — A moose walked into Deb Blaylock’s yard and chomped down on the head of the cabbage she was growing in August.

She chased it away with a lawn mower, added inflatable Halloween and Christmas decorations to the lawn and fixed her electric fence. The cabbage continued to grow — a story of resilience that felt especially important this year, Blaylock joked with her husband, Ken, as they volunteered at Harvest Fest 2020 on Thursday.

Her first-time cabbage entry weighed in at a hearty 40.5 pounds, the edges of some leaves showcasing visible bite marks.

Blaylock’s story was just one tale shared among volunteers and farmers during the annual giant vegetable weigh-off, a tradition that saw less fanfare this year due to the pandemic.

Crop superintendent Kathy Liska, better known among friends and volunteers as “Queen of the Crops,” would usually have 75 to 90 volunteers for the Alaska State Fair’s giant vegetable weigh-off competition and crop division events. This year, she has just six.

After news of the fair’s cancellation came out, Liska said, she had a farmer offer his own yard for the weigh-off.

“We just couldn’t fathom not having something,” she said. “(We wanted to) pay homage and thanks to this valley and these growers.”

Harvest Fest 2020, an event replacing the fair, featured only the giant vegetable weigh-off in the crops division.

Farmers trickled in as John Denver’s “Take Me Home, Country Roads” rang out over mooing cows held in the livestock pavilion.

Ken Blaylock, who has been volunteering with his wife for the past 18 years, walked into the empty vegetable showroom and stopped at each stark table, listing out which luscious fruits and vegetables would typically fill the space. He rounded the corner, stopping where local honey typically filled glass cabinets, and described the would-be crowded scene.

“You’d have the smells of corn dogs, funnel cakes,” he said, pointing across the pavilion, “... mixing in with cow poop.”

That was pre-coronavirus, a time many volunteers wished they could go back to, leaving this year in the dust. Volunteers joked about this year’s Harvest Fest 2020 ribbons being a potential collector’s item.

“It’s a fraction of it,” Blaylock said. “(But) we still got records being made.”

North Pole farmer Dave Iles approached the pavilion in dirt-caked shoes, carrying in his record-breaking vegetables one by one.

He broke two state records for cucumber length and weight, reluctantly beating his son’s current record with a 30.5-inch cucumber.

Iles has also requested that Guinness World Records add a new category for heaviest fruit or vegetable grown hydroponically, or grown without soil. He is hoping his 1,092-pound hydroponically grown pumpkin will be a new world record.

After measuring and weighing his cucumbers, asparagus bean and kohlrabi, Iles unraveled his long gourd vine.

Ninety percent of the plant was trimmed off just to get it to the fairgrounds, he said.

Volunteers spread out along the showroom, maneuvering around a rack of unused chairs, and gently placed the vine on a blank roll of paper.

Excitement filled the air as Iles walked with Gidget Sanders, watching as she meticulously measured the vine.

The plant measured 71 feet and half an inch, not quite long enough to beat the current record — which is also held by Iles.

He and his wife, Kira, are house hunting this week in the Valley with the goal of being closer to family and the fair, he said.