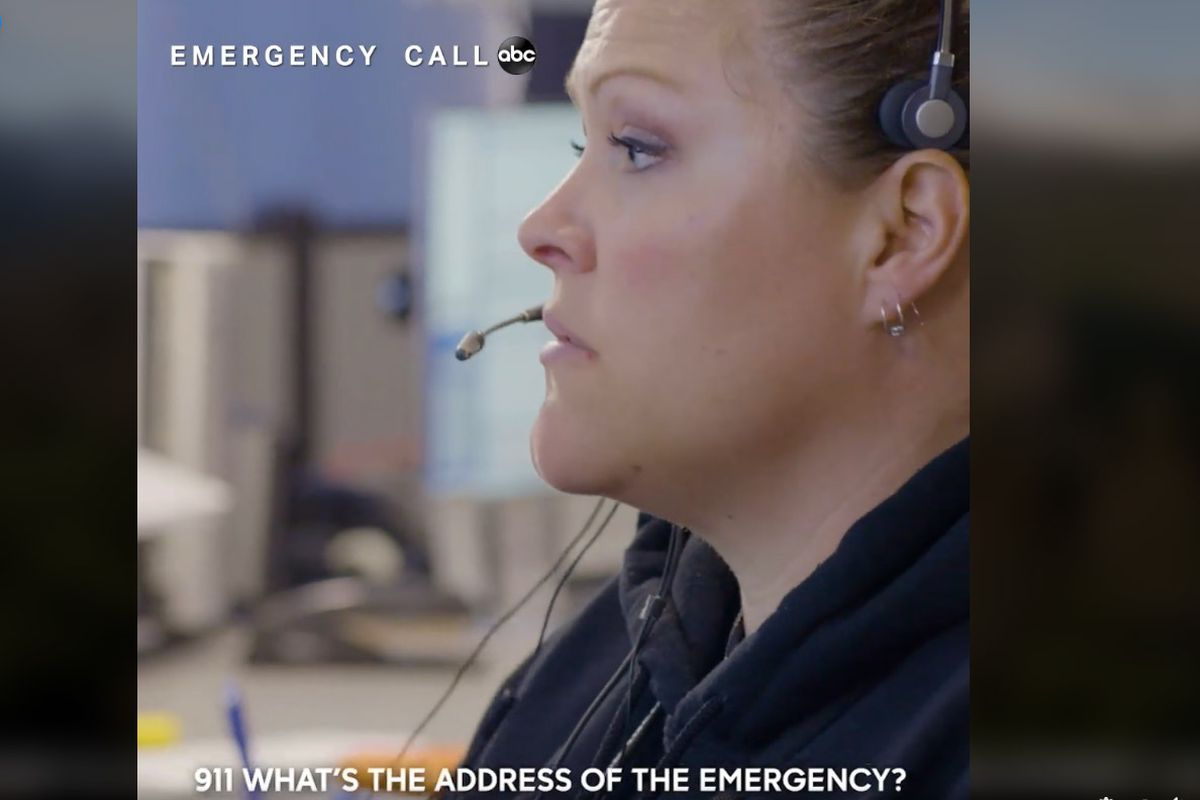 A screenshot of the ABC show Emergency Call featuring a dispatcher at the Mat-Com dispatch center in Wasilla. The show premieres Monday, Sept. 28, 2020.

A screenshot of the ABC show Emergency Call featuring a dispatcher at the Mat-Com dispatch center in Wasilla. The show premieres Monday, Sept. 28, 2020.

PALMER — The female whispers in a terrified voice from a ridge high above Meadow Lakes in the Talkeetna Mountains to a 911 call taker at Wasilla’s Mat-Com Dispatch.

“There’s a grizzly bear that’s been stalking us,” the caller says, trying to control her voice.

The bear has charged twice, she says. “We sprayed in front of it and then the bear ran away ... and then it came back charging."

She estimates the bear’s size at 12 feet — unlikely, but fear is a lousy measuring stick — “the biggest thing I’ve ever seen."

The bear spray is gone. She’s got no weapons. The dispatcher starts talking her through what to do next when suddenly a series of alarming sounds come through the line: a gasp, some rustling, a muffled scream.

“What was that?" the dispatcher says. "What did I just hear?”

And with that, the preview of “Emergency Call” fades out.

What Happens when Wilderness Knocks on your Door?

What happens when wilderness knocks on your front door? Emergency Call premieres Monday at 10|9c.

We’ll all have to wait until Monday at 9 p.m. when the show premieres on ABC to find out what happens next on the latest reality TV show filmed partly in Alaska.

The show depicts real-life scenarios in dispatch centers, including those in Wasilla, New Orleans and Austin, Texas.

The decision to allow filming at Mat-Com Dispatch, made in consultation with Wasilla Mayor Bert Cottle and city officials, came after show producers reached out in March or April, according to Jacob Butcher, the center’s communications manager. The city saw the benefits.

“I want to inject as much public education and public relations into the 911 system as possible,” Butcher said Friday. The show is also a potential recruitment tool: Mat-Com has 29 call takers on the roster, but there are several unfilled positions.

Producers spent a few weeks filming at the center, which dispatches for Alaska State Troopers, Wasilla Police Department and Mat-Su Borough emergency responders in a borough the size of West Virginia with multiple mountain ranges and glacial rivers but also significant amounts of drug and property crime, and the occasional homicide.

As the cameras rolled, producers picked the calls that interested them and matched the audio with footage of the dispatchers taking the call, Butcher said. The city required privacy protections to make sure no identifying information was released about callers, and producers re-recorded voices if they couldn’t reach the original callers or they didn’t want to be involved.

The bear call? There were no fatal maulings reported this summer near Meadow Lakes. It had “a positive outcome,” Butcher said.

“Emergency Call” marks the latest attempt to capitalize on Alaska’s wild country, dangerous critters and mythical status in the Lower 48. That combination has spawned dozens of shows set in the state since the cheap-to-make, hugely popular reality genre started flooding the airwaves more than a decade ago.

Alaska’s scenery has provided a backdrop for shows that even some Alaskans watch, like “Deadliest Catch,” but also those that ran into harsh criticism for overproduced portrayals and criminal activity, like “Edge of Alaska” and “Alaskan Bush People.”

The 911 dispatcher show is hosted by actor Luke Wilson, an executive producer on “Emergency Call" who’s better known for roles in movies like “Idiocracy,” “The Royal Tenenbaums” and the raunchy comedy “Old School.”

Real calls. Real heroes. Hosted by Luke Wilson, Emergency Call is a new series where you meet the people who are there to help on the other end. #EmergencyCallABC premieres Monday, September 28 on ABC.

Wilson, in an interview with an Austin television station, said he was deeply impressed with the skill it takes to be a good dispatcher. More than just relaying an address to emergency responders, 911 call takers calm or console people at the worst moments of their lives. They extract life-saving information from children and confused seniors.

The show isn’t without humor. Wilson talks about a guy licking a stop sign in Austin who triggered multiple 911 calls. There’s another clip involving someone with a spatula stuck in their throat.

It’s also not lacking in the drama that’s come to be a hallmark of reality television. In one preview, Wilson ominously sets the scene for a call from someone in Alaska’s backcountry with a dying cellphone who’s waiting for troopers to arrive.

“Imagine it’s night,” he says, looking into the camera. “You’re in the remote Alaskan wilderness surrounded by grizzly bears. Your leg’s broken. The sun has set and the temp is dropping. And every time you make a call for help, that battery gets closer and closer to dying.”

That call, made from the Glennallen area, also had a positive outcome.

“Emergency Call” is executive produced by Adeline Ramage Rooney and Jonny Slow with 8HOURS TELEVISION, showrunner Grant Kahler, and Wilson, according to the ABC website.

No, Butcher said, he didn’t get to meet the actor who hosts the show.

“I tried to put that in my contract for them but they kind of laughed," he said. “They said maybe if they get renewed for a second season.”