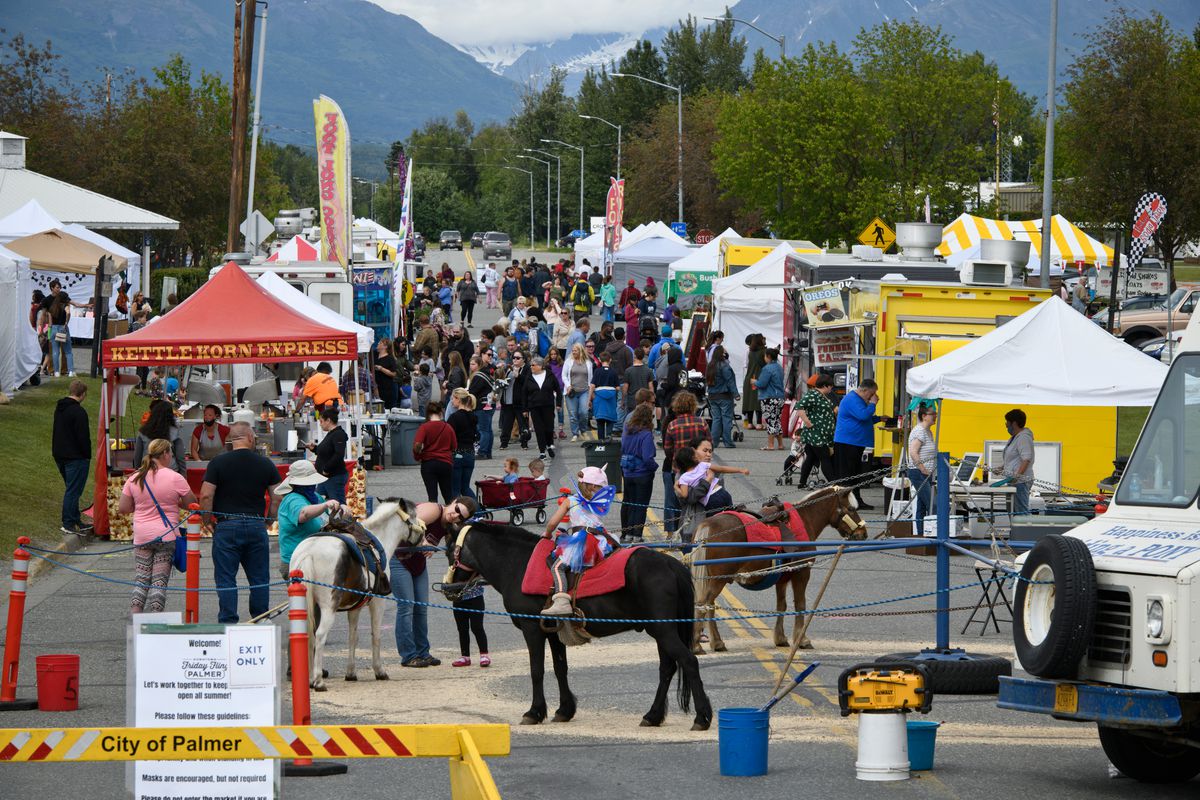 Craft and food vendors and their customers gather on South Valley Way in Palmer for the Friday Fling event on June 26, 2020. (Marc Lester / ADN)

Craft and food vendors and their customers gather on South Valley Way in Palmer for the Friday Fling event on June 26, 2020. (Marc Lester / ADN)

PALMER — Palmer’s city council is holding a public hearing on whether to enact an emergency mask mandate at a special meeting scheduled for 6 p.m. Wednesday.

If approved, the order would become effective immediately and last no more than 60 days.

A summary statement says the proposal comes in reaction to a “public health emergency that threatens to overwhelm our health system.” Last week, Gov. Mike Dunleavy issued an emergency alert asking citizens to remain diligent in social distancing and masking.

The proposal comes as COVID-19 cases rise to unprecedented levels in Mat-Su after saying fairly low since the pandemic began in March.

If approved, Palmer would become the first community to broadly require masks in Mat-Su. The city of Wasilla requires masks in some facilities, such as the library, but has not enacted a citywide mandate. Borough officials have not required face coverings except for inside borough buildings.

Dunleavy, who is from Mat-Su, has resisted calls to enact a statewide mandate. He has repeatedly said he prefers to leave that decision up to individual local governments.

Lengthy testimony is expected at the Palmer council session. By Wednesday morning, the city clerk had received more than 250 comments, officials say. Additional people were expected to provide comments in person.

To pass, the mandate needs approval from three quarters of the seven-member council, or instead of the usual majority.

If approved, the emergency ordinance would require masks or face coverings in all indoor public settings or communal spaces outside the home, an outdoor gatherings, or outside when it’s impossible to maintain six feet of distance from non-household members.

Face shields would be permitted for people who can’t tolerate a mask due to physical or mental disability; people communicating with someone deaf or hard of hearing; and people performing activities that aren’t safe while wearing a mask, such as drivers experiencing foggy glasses.

The order wouldn’t apply to children under five, though masks would be recommended for children two to five. It also wouldn’t apply to people in jail or court; presenters or musicians before an audience under certain conditions; people eating, drinking or scratching an itch; workers in their own office space; or people doing “high intensity exercise” indoors or outdoors.

It would generally require businesses to deny admittance to anyone not complying though with a provision for people requesting accommodation under the Americans with Disabilities Act.

For people who want to testify in person, seating will be limited to 10 total people at one time inside council chambers. People who want to submit testimony are asked to email the city clerk at nalley@palmerak.org by 5 pm.

The meeting will be streamed at https://www.radiofreepalmer.org/meetings-and-more/.