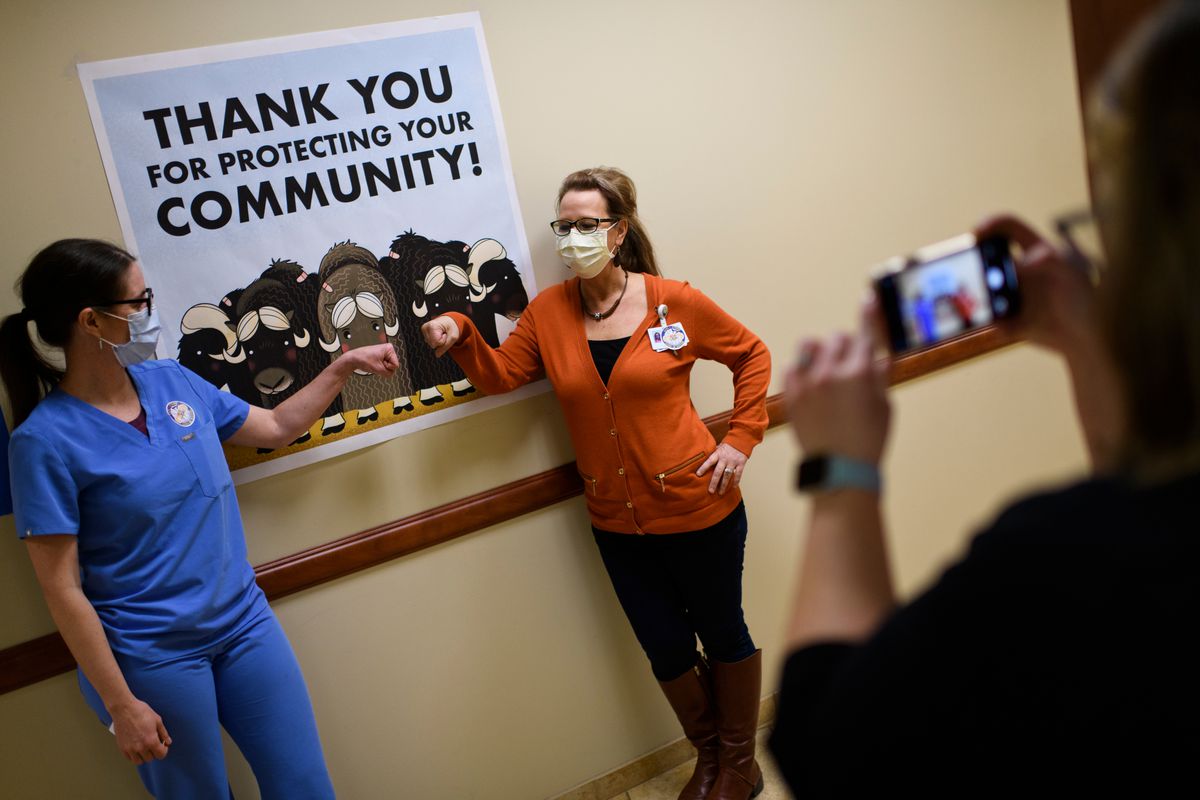 The Matanuska-Susitna Borough, where schools have struggled with scattered closures due to coronavirus outbreaks, now has more daily average COVID-19 cases than any other part of the state.

Even as Mat-Su took that position, several major high school sports events moved there from Anchorage due to less strict coronavirus protocols.

Mat-Su moved into the top spot for daily average case rates Tuesday after the Yukon-Kuskokwim Delta region held that unwelcome position for four months as the virus ripped like wildfire through the hub of Bethel and outlying villages, some without running water.

Gov. Mike Dunleavy, a Mat-Su resident, was quarantined at home this week after testing positive for COVID-19 Wednesday morning. It’s not yet clear exactly where Dunleavy picked up the virus.

Asked about the high case rates hitting Mat-Su now, state health officials said they started with spiking numbers in schools, mostly associated with unmasked sports and other activities that prompted the school district to adopt a 100% masking policy.

The new cases indicate “the same kind of spread we usually see with social contact, friends and family,” said Rene Dillow, Mat-Su public health nurse. “Right now we have lots of sports events going on. There’s a lot of socialization going on around those events, not necessarily at them. You go out for dinner.”

Mat-Su, the state’s only large school district to start the year with in-person learning, on Thursday was reporting 108 positive tests among staff or students in the past two weeks. For every positive case, there are generally 10 close contacts.

“That definitely generates a lot more testing and a lot more concern because close contacts and folks who had had shared exposures will go and seek testing,” Dr. Louisa Castrodale, a state epidemiologist, said during a media briefing Thursday.

The number of new cases in Mat-Su has on some recent days overtopped the number in Anchorage, which has roughly triple the population. Mat-Su on Thursday had an average of 38.29 cases over the past 14 days, surpassing Anchorage’s average of 37.43.

One explanation is that the virus took off in Anchorage last year, sending daily counts spiking and filling hospitals with coronavirus patients, said Dr. Wade Erickson, a Wasilla physician who founded Capstone Clinic and serves as medical director. Erickson’s comments last spring about the need for local residents to develop herd immunity through exposure drew criticism from state health officials.

Mat-Su also saw a spike in November, but then cases dropped again before rising again — though not as significantly in the past few weeks, Erickson said.

[For months, the Mat-Su avoided the COVID-19 spikes hitting other regions of Alaska. Now it’s a hotspot.]

“We’ve had a fairly flat curve in the Mat-Su since the very beginning. I think because of that, it’s going to extend out longer,” he said. “Anchorage had a fairly significant spike. Their herd immunity was obtained earlier. We’re just naturally more spread out, out here.”

The borough also has among the lowest per capita levels in the state for residents getting at least their first doses of COVID-19 vaccine, according to state data.

Mat-Su is the size of West Virginia, with communities strung out along roads rather than in one concentrated urban center like Anchorage.

“There’s people who live on the rail system and don’t come in other ways, there’s people who live in dry cabins and don’t regularly go to and fro,” Dr. Anne Zink, the state’s chief medical officer and a Mat-Su resident, said Thursday in response to a question about low uptake from seniors in Mat-Su and the Kenai Peninsula. “Not everyone has internet, not everyone has broadband. There’s a lot of limitations across the state.”

Mat-Su has no mask mandates or capacity restrictions like those required by emergency orders in Anchorage. The second-class borough lacks health authority to order broad virus-related restrictions. A proposal to require masks within Palmer late last year failed amid vocal opposition from hundreds of people.

The lack of COVID-19 restrictions in Mat-Su this month prompted two large statewide high school sports events to move there from Anchorage.

The state high school basketball championships are slated for several Mat-Su schools starting in late March, and the three-day state high school nordic ski championships began Thursday near Palmer. A state hockey tournament that was originally planned for Fairbanks was also held last weekend in Wasilla, a move prompted by the closure of Fairbanks ice rinks in the fall.

“It just didn’t give us enough time to get that set up and running,” Strickland said Thursday.

Mitigation protocols this year mean the roughly 160 skiers must wear masks until their race, the usual mass starts are staggered, and the relays are no-touch, he said. Teams not from the area are mostly staying in Anchorage.

“We believe the mitigations can keep the participants safe,” Strickland said. “It’s really what they’re doing when they’re not at the events that becomes the bigger issue.”

The March Madness Alaska tournament usually draws 80 teams, though fewer will most likely participate this year. It will be hosted at Palmer, Colony and Wasilla middle or high schools with gyms large enough to allow more room for fans to spread out, Strickland said. Masks will be required, and again most out-of-town teams are expected to stay in Anchorage.

It’s unclear whether Mat-Su will be at high alert status in a month, he said. “While numbers in one part of the state are in a certain level right now, we don’t know where they’re going to be in six weeks. Somebody that’s at low status could be high. Somebody at high could be medium or low.”

Asked if contact tracers were seeing any new cases from the recent state competitions moved from Anchorage, public health nurse Dillow said no, it was too soon to say.

She said she’s anticipating there may be some, given the amount of socializing that generally occurs before and after such events, with friends and family.

“This is serious,” Dillow said. “There are people who got really, really sick from this. It’s not a high percentage, but nobody should take exposure lightly.”

Correction: This story has been updated to clarify that last weekend’s state hockey tournament, which took place in Wasilla and was originally slated to be held in Fairbanks, was not one of the sporting events that relocated to Mat-Su after originally being scheduled to occur in Anchorage.