Wasilla High works with Knik Tribe to update, but not eliminate, its Warriors mascot after outcry 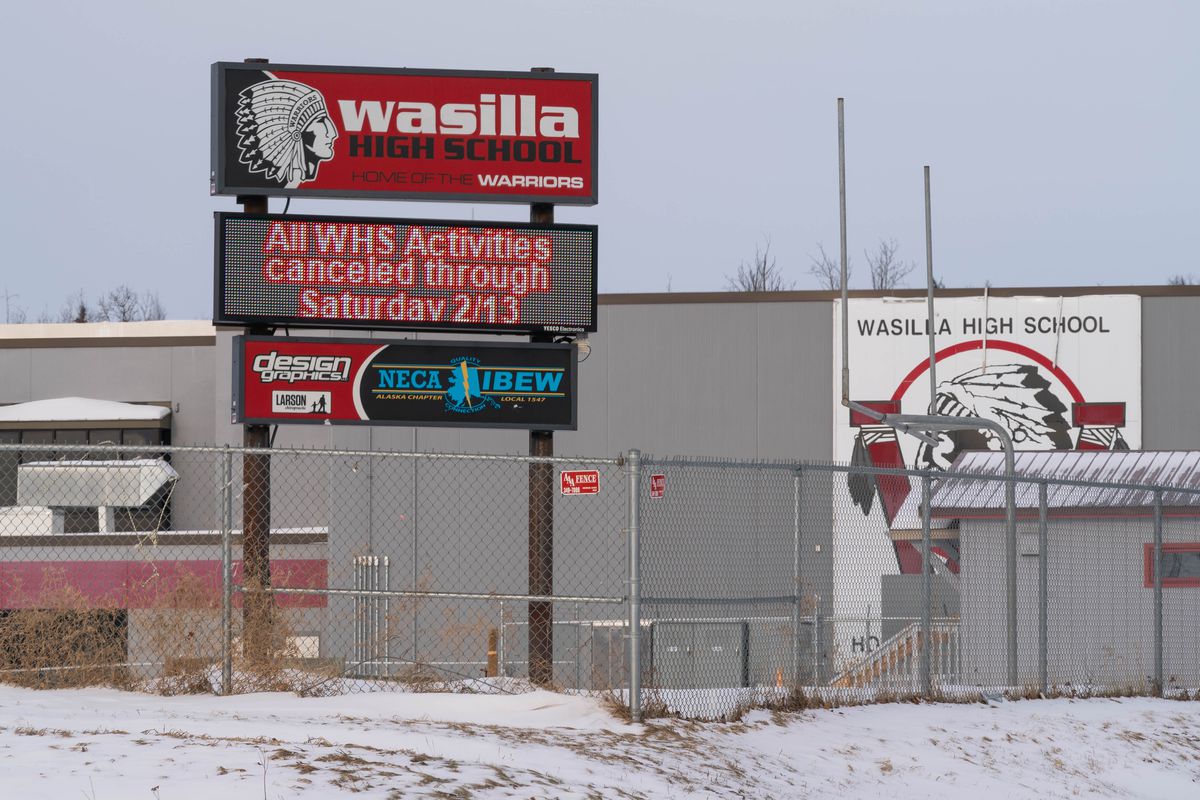 WASILLA — For decades, the Wasilla High School Warriors used a mascot logo based on a stock image of an American Indian “chief” wearing a Lakota Sioux headdress.

But instead of removing the mascot as criticism grew last year, the school relied on an established partnership with local tribal officials to update the logo.

This month, students voted on a new, improved mascot: the likeness of Chief Wasilla, the Dena’ina Athabascan leader who gave the city its name, wearing shells and other locally specific regalia.

Wasilla High principal Jason Marvel realizes there may be some hard feelings about changing the old logo. His announcement about the change on the school’s Facebook page in mid-April drew four dozen comments, many critical of the new logo. “Glad my kids ALL graduated when they did!” one mother wrote.

Change is difficult, Marvel said in an email, but it was important for all students to feel they belong at the school, and also to build community by celebrating shared history and honoring those who came before.

“We are not saying that we aren’t the Wasilla Warriors anymore,” he said. “We are saying that a Lakota Sioux Indian headdress is not specific to our area. We are saying that our new logo with its dentalium necklace, eagle feather headdress and fur coat represents a Dena’ina Athabascan Warrior.”

Tribal leadership is “expecting great things” to come out of the interest in not only the mascot but tribal history through work on an interpretive display at the school, said Richard Porter, CEO of the Knik Tribe, which collaborated with the school on the new image.

There are only 77 base members left on Knik tribal rolls now, Porter said.

He credited Marvel for asking for the tribe’s help “in this political climate and with all the separation globally, nationally, statewide and locally.”

‘Strong in all aspects’

Wasilla’s mascot isn’t the only warrior in the state. Healy’s Tri-Valley School is the Warriors, but their mascot looks like a Viking.

Bethel Regional High School, also the “Home of the Warriors,” uses an image of a Yup’ik hunter in a fur ruff as a representation of the region’s subsistence lifestyle and fierce spirit needed to survive, said Darren Lieb, the school’s activities director and a 1987 graduate. The Hooper Bay Warriors logo also shows a hunter.

“Our logo is mainly a person that is strong in all aspects because we live in a harsh place on the barren tundra, we have hard winters,” Lieb said. “A warrior is someone that can overcome those type of things.”

There are other tribal or cultural references at schools around the state: the Mt. Edgecumbe Braves; the Barrow High School Whalers and Tikigaq Harpooners of Point Hope; the Aniak Halfbreeds, a moniker chosen by students in the 1970s.

A number of schools in the Lower 48 used the same logo as the Wasilla Warrior mascot, which was not an original image, according to Marvel.

An online petition created last summer called for the mascot’s replacement “with a more appropriate ‘Warrior’ figure that doesn’t make a mockery of sacred Native American and/or Native Alaskan traditions.”

More than 3,200 people signed the petition, including John Gourley, a Wasilla High alum and member of Grammy-winning band Portugal. The Man.

Gourley wrote on the petition site in July 2020 that, as a white student, he grew up thinking the mascot “was about pride and representation without realizing the negative effect it had on our Native students” before learning otherwise after he left school.

“Kids are often afraid to speak out, afraid to tell friends how they feel. We’ve all been there,” he wrote, saying the mascot needed to be changed. “Alaska is full of rich imagery and culture to pull from.”

The school was already working with Knik tribal officials by then.

Collaborating on a redesign

Back in 2019, administrators reached out to the Knik Tribal Council to collaborate on a project to honor Chief Wasilla, the city and school’s namesake, with a display case that gave the chief’s history and that of the Dena’ina Athabascan people, Marvel said.

Then the coronavirus pandemic hit, delaying those discussions.

The petition last summer “got significant traction due to the events that were happening across the country and a lot of alumni signed the petition and wanted to see the old Warrior head removed,” Marvel said. “We have been clear from the very beginning that we would not be removing the Warrior mascot, but updating the logo to be more specific to our area and the Dena’ina Athabascans.”

After the petition gained steam, administrators at the school asked the tribal council if they would help redesign the logo and help guide the process “with historical knowledge of the area and the Indigenous peoples that inhabited it,” he said.

They worked with the one photo of Chief Wasilla they had.

Under school board policy, any logo changes must be led by students attending the school.

The school formed a committee of eight students and held two meetings, one last fall that included a historical presentation, and then one in the spring to review submissions. Community members and students submitted seven logos.

Students voted on two finalists on April 13. Some 83% supported the winner.

The school’s “W” logo with a spear will start appearing on uniforms as teams renew them, Marvel said. The “new Warrior head” will eventually replace the one on the outside of the school and those inside.

The mascot change is just part of the work the Knik Tribe is doing with Mat-Su youths, Porter said. That includes after-school programs, a suicide prevention group and a behavioral health program focused on children and families.

He’s eager to see how work on the interpretive kiosk, in the design phase, progresses now.