Proposal for Palmer police advisory board is drawing fire 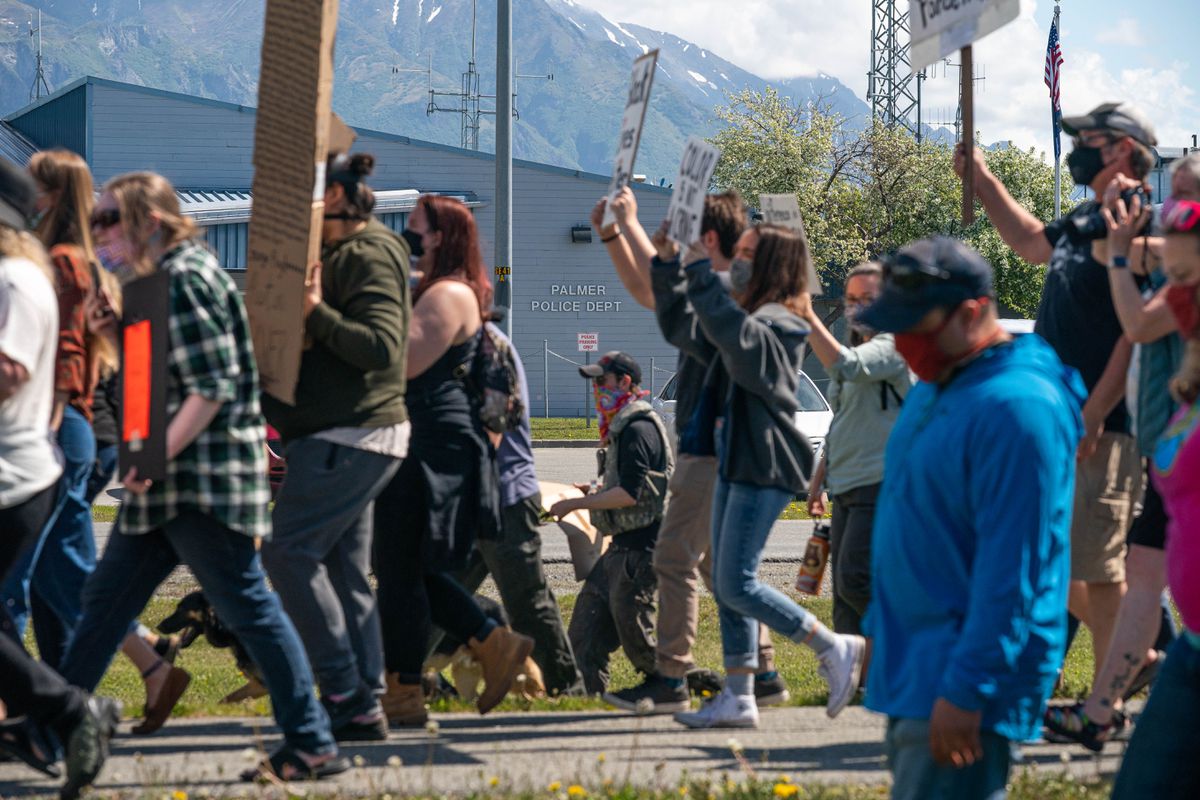 A crowd marches past the Palmer Police Department to protest racism and police brutality on Saturday, June 6, 2020. Palmer's city council on Tuesday night will hear a presentation on a draft proposal to create a citizen police advisory board. (Loren Holmes / ADN)

A crowd marches past the Palmer Police Department to protest racism and police brutality on Saturday, June 6, 2020. Palmer's city council on Tuesday night will hear a presentation on a draft proposal to create a citizen police advisory board. (Loren Holmes / ADN)

PALMER — A group called Mat-Su Moms for Social Justice wants the city of Palmer to create a citizen advisory board to help oversee the Palmer Police Department.

A draft proposal goes before Palmer’s city council on Tuesday night, where it’s expected to draw heavy audience participation before it’s even officially up for a vote.

The idea is drawing fire on social media from people who inaccurately say the group is trying to “defund” the police department and accusing them of being “socialists” without law enforcement credentials.

But the concept isn’t new: a number of Alaska cities, including Anchorage, already have some kind of public safety or police advisory groups. Nome’s, approved by the city council there in 2019, at the time was the first in the state to “provide real civilian oversight and accountability to local police,” according to ACLU Alaska.

Generally, such boards make recommendations and don’t have power to enact new policies or procedures.

“Really it is just a way for citizens to have another avenue of communication with the police and input on police activities,” said Andrea Hackbarth, one of three supporters making the presentation to the council. “One big part of the draft proposal is to help increase community relations with the police, increase trust between the community and police.”

Palmer’s police department came under scrutiny after Chief Dwayne Shelton was placed on administrative leave last June because of inflammatory social media posts, including one in 2018 that called the Black Lives Matter movement “a hate group plain and simple.” Shelton returned to work later that month.

More recently, a Palmer police arrest early New Year’s Day captured on video generated protest from some who believed it was an “outsized response” to a relatively small violation, as Hackbarth described it.

A police statement issued in January said the man, 38-year-old Isaac Meyer, was pulled over for littering but arrested for assaulting an officer and disorderly conduct after occupants in his car became belligerent and Meyer punched and kicked an officer. A shotgun was later found in the car.

Palmer’s police department is the only one in the city without an advisory board, according to a letter that’s part of Tuesday’s meeting packet.

But if created as proposed, the police advisory board could become the city’s only citizen group overseeing employee policies and performance, said John Moosey, Palmer’s city manager. Existing planning, parks and airport bodies don’t make decisions pertaining to staff in those departments.

“We understand the environment we’re in,” he said. “We want a happy town where everyone is treated well. And we want to improve.”

The proposal is only in the draft stages and is likely to change, Hackbarth said. “It’s just a starting point.”

As proposed, a seven-member board made up of Palmer residents and people in the greater Palmer area would be appointed by the mayor and confirmed by the city council.

Under a proposal included with the city council packet, the board would advise the police department and city council; solicit community input about police policies and procedures; serve as a liaison between police and the community; review and make recommendations about police department policies, procedures, training and programs; and review citizen complaints as a neutral third party to make sure complaints are resolved “in a timely and just manner.”

In order for the police board to advance on Tuesday night, the mayor or at least two members of the city council need to request it be put on a future agenda, Moosey said.

He expects the entire council to take a vote, however, given the already charged nature of the discussion.

Shelton did not immediately respond to a request for comment.