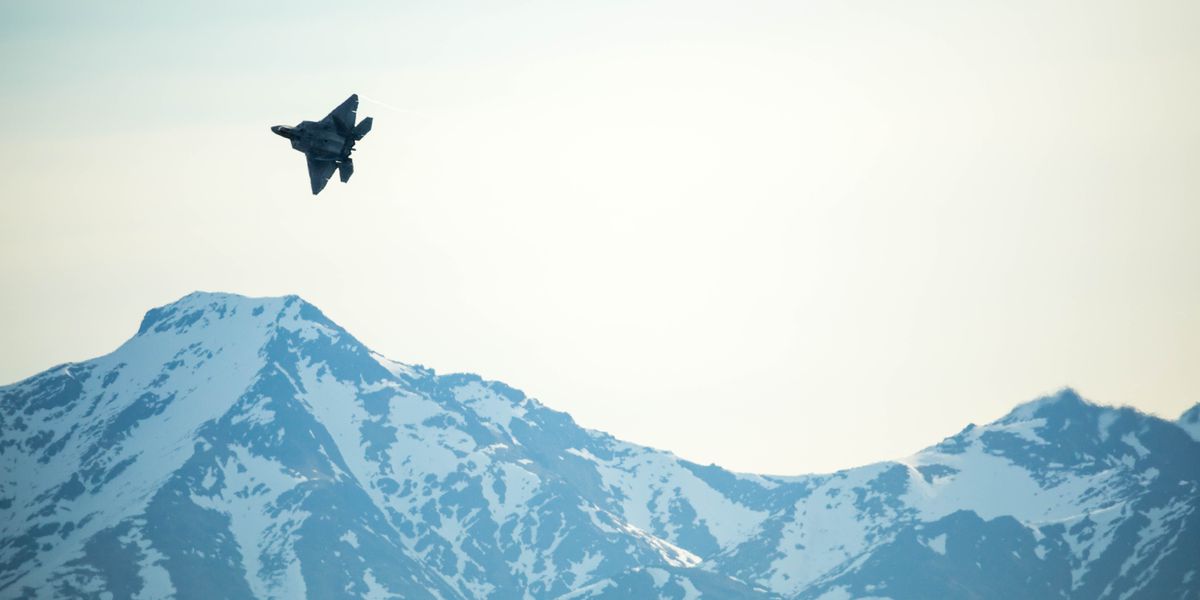 An Air Force F-22 takes off from its home base at Joint Base Elmendorf-Richardson Tuesday during Northern Edge, a major military training exercise. (Loren Holmes / Alaska Dispatch News)

An Air Force F-22 takes off from its home base at Joint Base Elmendorf-Richardson Tuesday during Northern Edge, a major military training exercise. (Loren Holmes / Alaska Dispatch News)

About two dozen military planes took off from Joint Base Elmendorf-Richardson in Anchorage Tuesday morning, headed for Interior Alaska for the second day of the 12-day-long, biennial Northern Edge training exercise.

It's the largest military exercise in Alaska this year and involves about 6,000 soldiers, sailors, airmen and other personnel, plus nearly 200 aircraft and several ships. From May 1 through May 12, the participants will test their skills in simulated combat in a remote swath of the Interior and the Gulf of Alaska. The U.S. Air Force's Alaskan Command is leading the exercise.

"The thing that is so special about an exercise like Northern Edge is we can replicate the environment that we think we could face in a high-end scenario," Col. Christopher Niemi, commander of the 3rd wing at JBER, said in a news conference Tuesday. "It makes our pilots and our maintainers and our operators better because we have the opportunity to expose them to that environment."

The fake fight pits a red team and a blue team against each other, said Lt. Gen. Kenneth Wilsbach, commander of the Alaskan North American Aerospace Defense Command Region. They run through daily scenarios.

"We have specific mission objectives," he said. The scenarios take place in the sky, on the ground, in the water and on the computer. One combat element: preventing a team from hacking into computer network systems and "using cyber to improve our offensive abilities," he said.

Wilsbach said the military could not divulge specifically what it was learning during Northern Edge. However, he said the training would improve the military's ability to "respond to crises" around the world, and specifically in the Indo-Asia-Pacific region.

"It's a great benefit to see how all of it comes together — Army, Navy, Air Force and Marines," he said.

For the duration of the exercise, JBER is housing about 2,000 additional people, said Col. George Dietrich III, base commander. He said the base filled every designated lodging area, plus had to house about 900 people in hotels in downtown Anchorage.

"Two-thousand people is about the size of my wing," Dietrich said. "It's almost like a whole other installation being laid down on top of this one."

Aside from possibly noticing an increase in military personnel around town during the training exercise, military officials said Tuesday that Alaska residents may also see an increase in planes and jets taking off and landing at JBER and Eielson Air Force Base near Fairbanks.

"But you're not going to see or hear much after that," Niemi said. "We're operating in areas either over land or underwater where there aren't a lot of people, so we look very closely at that, not just the people, but also the marine mammals and the other people in that environment and we're pretty confident that we're not really having a significant adverse impact, but we're very sensitive to that."

Northern Edge activities have been controversial in Alaska's coastal towns. Environmentalists and other critics are concerned about the training's impacts to fish and marine mammals from underwater live sonar and deposits of heavy metals and hazardous chemicals, as well as other potential disturbances.

"The Navy has declined our request that they put independent scientific observers aboard and, No. 2, they will not conduct real-time environmental monitoring," said Rick Steiner, a marine conservation biologist in Anchorage and former University of Alaska professor.

Plus, Steiner and others said the training coincides with the start of the commercial salmon fishing season and comes when animals are migrating into Alaska. Local governments in communities from the Kodiak Island Borough to tiny Tenakee Springs passed resolutions asking military leaders to reschedule the training to a time after mid-September, after most fishing comes to an end.

In an April letter to the commanders of the U.S. Pacific Command and U.S. Pacific Fleet, U.S. Sen. Lisa Murkowski asked that they "give serious thought to conducting the Gulf of Alaska component of the Northern Edge 2019 exercise in the fall."

Wilsbach said the military has researched the sonar it uses in the Northern Edge exercise and determined "most of the fish species didn't even hear the sonar."

"I know some people feel there is impact but when we go to the people who are smartest about the science of the activity, they all tell us, and we're very confident that they're correct, that we're not having an impact on those species," Wilsbach said.

Asked what Alaskans should think when they see fighter jets flying in and out of the military bases this week, Wilsbach said: "They should be hearing the sound of freedom and (feel) proud of their service members that are training so they're as proficient as they can be, so if they are ever asked to do their mission, they are ready."