Their families are suffering in Puerto Rico. The Army needs them in Alaska. 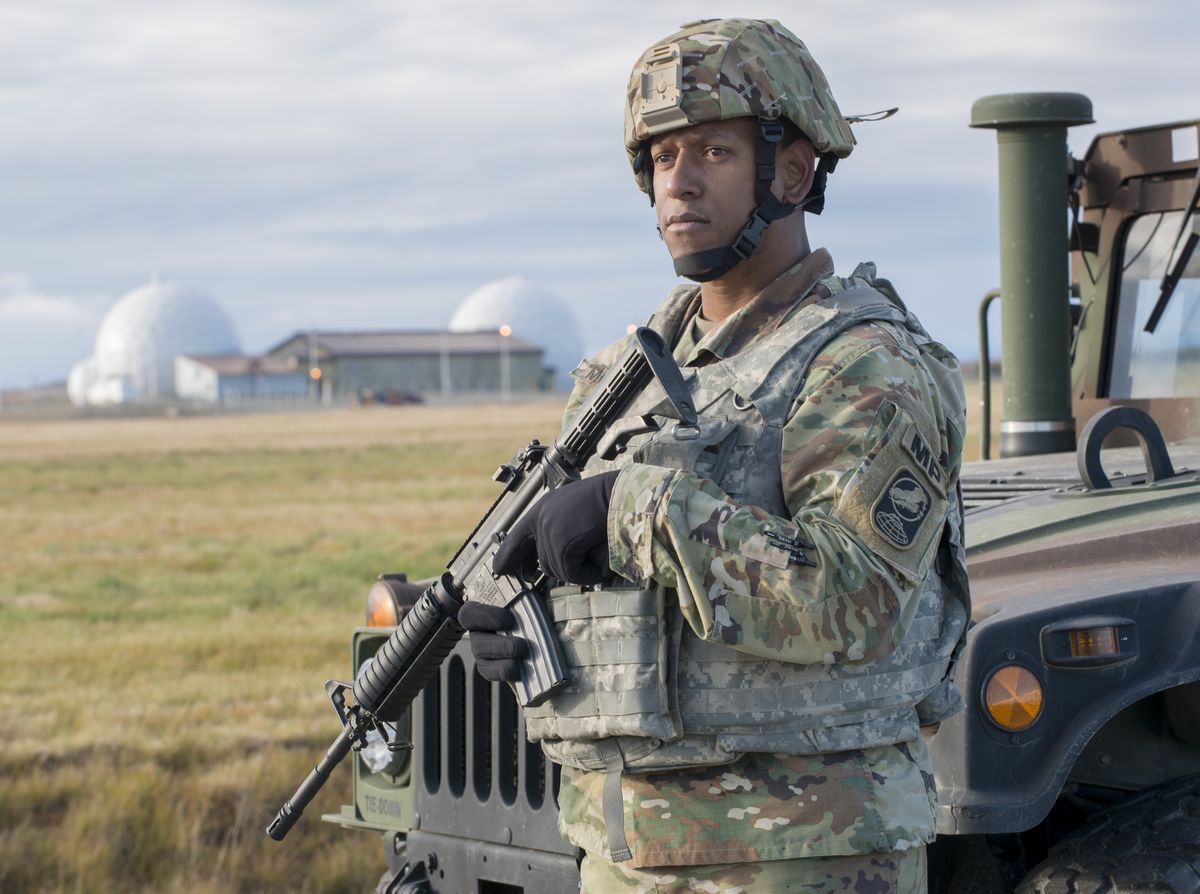 Staff Sgt. Jamie Montes, a military police officer with the 49th Missile Defense Battalion, pulls security inside the Missile Defense Complex on Fort Greely, Alaska, Sept. 26, 2017. As one of many National Guard soldiers from Puerto Rico assigned to the battalion, Montes knows the mission at this remote Alaskan post is too important to abandon despite having family members affected by the recent devastation of Hurricane Maria on the Caribbean island. (U.S. Army photo by Sean Kimmons)

Staff Sgt. Jamie Montes, a military police officer with the 49th Missile Defense Battalion, pulls security inside the Missile Defense Complex on Fort Greely, Alaska, Sept. 26, 2017. As one of many National Guard soldiers from Puerto Rico assigned to the battalion, Montes knows the mission at this remote Alaskan post is too important to abandon despite having family members affected by the recent devastation of Hurricane Maria on the Caribbean island. (U.S. Army photo by Sean Kimmons)

The news from home was unsettling.

In Sabana Grande, a village of roughly 25,000 on Puerto Rico's mountainous southwest corner, "I don't have water," she said in an emotional video message to her son, captured by a sergeant in Ortiz's former unit in San Juan who trekked across the island to check on the soldier's family. "I don't have nothing," she added, "but I am alive."

Ortiz is one of about 60 members of the Puerto Rico National Guard who have been posted to Fort Greely, where they help guard the antimissile interceptors designed to protect the U.S. mainland from a possible nuclear missile strike. It is among the military's most remote postings on U.S. soil: an hour's drive to the nearest city, Fairbanks, and another six to Anchorage – from which a flight to Puerto Rico can take at least 13 hours.

In the deadly storm's aftermath, these soldiers have felt uniquely isolated and alone. When not on duty, they've been glued to their laptops, phones and TVs, desperate for any word from home.

"For probably 24 to 48 hours, there was radio silence and no one heard anything," said Lt. Col. Orlando Ortega, who commands the Alaska National Guard's 49th Missile Defense Battalion and has family ties to Puerto Rico. "Then stories started coming out."

One soldier learned an uncle had been killed in the storm.

Three others discovered their families' homes were destroyed.

The Puerto Rico National Guard hires and trains many MPs, as military police are known, but it has few full-time jobs available for them on the island. Most are kept on part-time status, earning pay only when they're on duty and with far fewer benefits, such as health care.

The battalion in Alaska, one of only two such units in the U.S. military, is on 24-hour alert, tasked with monitoring for incoming ballistic missile attacks. Envisioned as a Cold War counter to Russian threats, the interceptor mission has come back into the spotlight after North Korea demonstrated new rockets that appear capable of reaching the United States.

To keep such sensitive technology secure, the 49th Missile Defense Battalion has 130 full-time MP jobs. But it has long struggled to recruit Alaska National Guard troops willing to spend three years in one of the state's most demanding and austere assignments.

Hundreds of Puerto Rican troops have stepped in over the years and now account for about half of all MPs assigned to the unit. Most choose to move their families to Fort Greely, forming what Ortega called a "very tight-knit" community because, he said, "All we have is each other here."

The devastation in Puerto Rico – and what has been a painstaking recovery – has proved stressful and distracting, soldiers say. Apart from their anxiety about their loved ones' safety and well-being, many have been cut off from their finances, unable to make withdrawals and pay bills as banks throughout the island are slow to come back online.

Those who lost family members or whose homes were destroyed were sent to Puerto Rico immediately in Maria's aftermath. The battalion's missile defense mission is a top national security priority, so the battalion's other members have remained at Fort Greely. That has been tough for those who joined the National Guard expecting that one day they would be called upon to help after such a disaster.

"You're caught in a dilemma," Ortega said. "We all understand we are all the shield of the nation from intercontinental ballistic missiles, which is a national strategic mission for protecting the people of the United States. At the same time, your own people, your island, your family members are suffering and you want to run and help them. It's a pull they have. If they were back in Puerto Rico, they would be helping people."

The frustration has been particularly acute for Ortiz. As a 15-year police officer in Puerto Rico, he has training and relationships that would make a difference. "Here," he said, "I can do nothing."

At 36, as one of the unit's older soldiers, he finds himself rallying the younger troops, encouraging them to stay focused – and have faith.

"I know we have family but we cannot start crying because we don't know nothing about them," Ortiz said. "We have to pray to Jesus that everyone's OK."