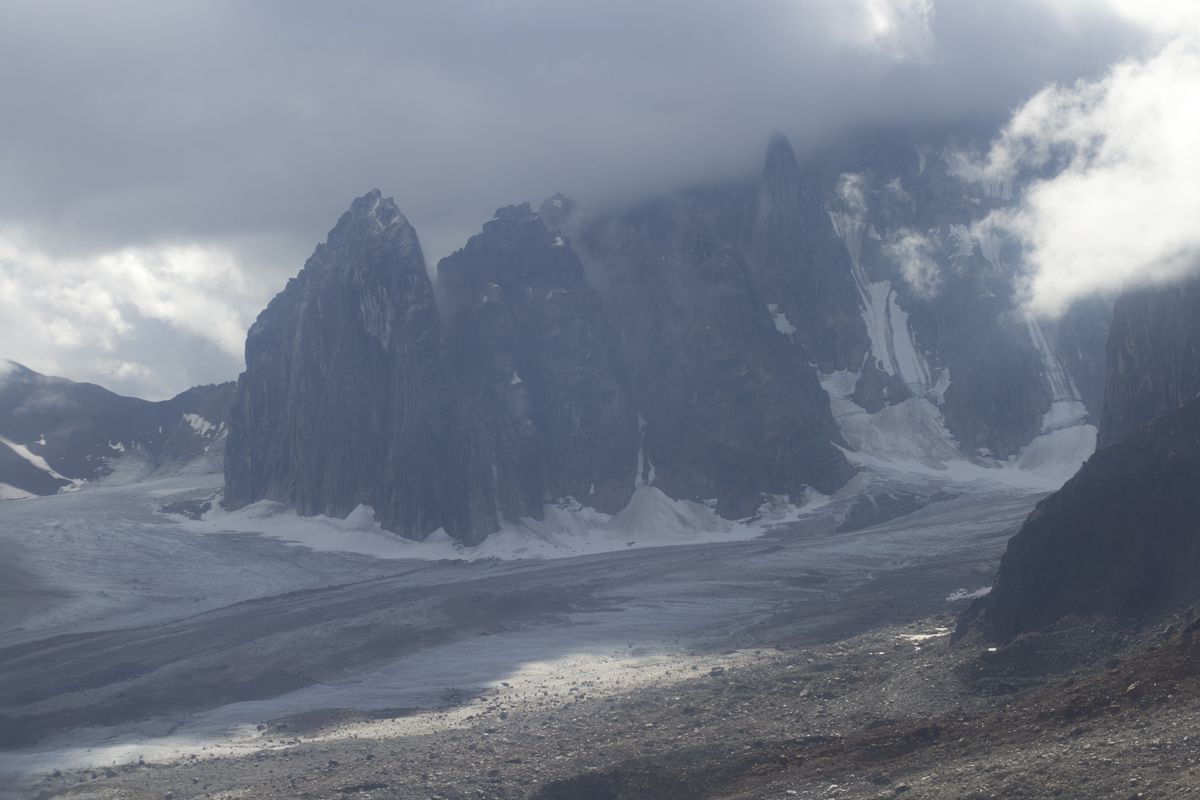 Eldridge Glacier in the Alaska Range, where the debris field from Gamble Chalk 1, a U.S. Air Force C-119 aircraft that crashed into Mt. Silverthrone on Nov. 7,1952, was discovered on Aug. 17, 2016. (Photo by Frances Caulfield)

Eldridge Glacier in the Alaska Range, where the debris field from Gamble Chalk 1, a U.S. Air Force C-119 aircraft that crashed into Mt. Silverthrone on Nov. 7,1952, was discovered on Aug. 17, 2016. (Photo by Frances Caulfield)

For more than 60 years, remnants of a wrecked U.S. Air Force plane were lost in the Alaska Range, buried beneath ice and snow on a glacier snaking through a mountainside. And for generations, families had no hope of recovering the bodies of 19 service members killed in the 1952 crash.

The plane — a boxy C-119 aircraft known by its radio call sign, Gamble Chalk 1 — has been found. Retired geologist Michael Rocereta, who spent much of his career searching for, and discovering, oil fields, used his training in glaciology to sleuth out the plane's movement through the decades as a glacier slowly carried it away from the crash site.

What will happen next is unclear. A helicopter flight to the wreckage is planned for August, to assess whether recovery of human remains is possible. Families of men killed in the flight, like 23-year-old Daniel Blasi of Kansas, hope for closure.

Already the Blasi family has visited the site, along with National Park Service officials who confirmed the location of the plane by retrieving a piece of debris imprinted with the Gamble Chalk 1 serial number.

If it wasn't for years of volunteer effort and a lucky break, the discovery might have never happened.

Gamble Chalk 1 was the first of three U.S. Air Force planes to crash in Alaska in as many weeks in November 1952. The second, Warm Wind 3, is still lost in the Cook Inlet area. The third, a Globemaster, was found on Colony Glacier in 2012. Military officials have been recovering human remains and debris since, sending recovered service members home with full military honors.

The Globemaster's discovery in 2012 is what prompted Rocereta to start digging into the subject – and would eventually lead him to the undiscovered airplane debris on Eldridge Glacier.

Rocereta is retired, having worked as a geologist and as a senior manager in the oil and gas industry. He's also a pilot, and when he heard news that the Globemaster had been found – on a route he flew over frequently – he felt embarrassed, and a little guilty.

"How could I miss it?" Rocereta said.

His research into the Globemaster crash culminated in a book – "Letters from the Globemaster Families." Rocereta wrote that the Gamble Chalk 1's last flight was intended to travel from Elmendorf Air Force Base in Anchorage to the Big Delta Army Air Field in Interior Alaska.

But the plane immediately veered off course. It followed the wrong navigation beacon, heading to Skwentna, west of its intended target, Talkeetna. Later, likely because the pilot believed he had crossed over Summit beacon, the plane angled left as if heading to Nenana, the next waypoint, Rocereta wrote.

Instead, the plane turned toward some of the tallest mountain peaks of the Alaska Range.

A second plane, Gamble Chalk 2, departed just 20 minutes later and also followed the wrong navigation beacon. It avoided the same fate – air traffic controllers were able to contact the plane and alert them of the mistake, and they corrected course.

But air traffic controllers were delayed in reaching Gamble Chalk 1. The warning was never delivered. Gamble Chalk 1 may have heard that transmission from the other plane, Rocereta wrote.

The plane was gaining in altitude, suggesting it was climbing to avoid terrain, when it crashed into Mount Silverthrone at 12,000 feet, at 3 a.m. on Nov. 7, 1952.

The plane was spotted a few days later – but recovery was deemed too dangerous. More than half a century would pass before it was seen again.

Rocereta said his motivation to find the plane came from an "unseen force that drives pilots together, especially in the midst of calamities."

"We owe it to the families, and to the servicemen who gave their lives to their country, to get out there and find them and help recover them if we can," Rocereta said.

Here's how he did it:

Rocereta started with the point of impact on Mount Silverthrone, using historical documents to determine its most likely impact point. Then, he traced the ice's movement on the spine of Mount Silverthrone down Eldridge Glacier. Like streams converging onto a larger river, he figured out which ice lobe the debris would have traveled down, and therefore where in the roughly mile-wide glacier it would likely be.

Then, he studied a glacial feature called ogives, which are pressure ridges that form annually at the base of an ice fall. They act like the rings of a tree, and that allowed him to track each individual year along the length of the glacier.

With those two coordinates, he had his area — about 1,000 feet wide and roughly 3,000 feet long — where the plane should be, by his calculations.

Aug. 17, 2016, was a beautiful, cloudless day, perfect weather for a flight to the mountain, Rocereta recalled. But when he reached the area, along with Paul Roderick, director of operations at Talkeetna Air Taxi, and photographer Frances Caulfield, they found the glacial valley – and their search area – covered by a cloud.

The fog was like a cloak hanging over the search area on an otherwise cloudless day, Roderick said. It seemed to be "playing with us," he said. They couldn't get close, so they circled for a while, and almost left the area altogether.

Eventually the fog began to recede. They flew as high as they could up to the cloud and turned left, into the search area, Rocereta said.

"And there, as if providence told us 'you've flown up high enough' … there was the debris," Rocereta said.

In August 2017, a National Park Service team went to the site, with a mission of documenting and evaluating the debris, said Erika Jostad, chief ranger at Denali National Park and Preserve.

"Nearly all visible debris is small pieces of crumpled aircraft aluminum," Jostad said in an email.

The only piece of debris recovered from the site was a plate with the airplane's serial number – exactly what was needed to provide solid confirmation that it was indeed Gamble Chalk 1.

An assessment flight is planned for mid-August. Three mountaineers – one from the Dover base and three from Anchorage's Joint Base Elmendorf-Richardson – will be joining three National Park Service rangers on a helicopter flight to the wreckage site.

Allen Cronin is chief of the Past Conflicts Branch of the Air Force Mortuary Affairs in Dover, Delaware. He functions as a liaison between the military and families, and stressed that the August mission to the site will be a preliminary assessment, not a recovery mission.

It's too soon to tell whether recovery will be feasible, he said.

The weather window at the site is short. The site is snow-free for a few weeks each year in late summer, Jostad said.

Wishing for a homecoming

When Daniel Blasi, a soldier drafted by the U.S. Army during the Korean War in 1950, died in the Gamble Chalk 1 crash, his family held a funeral. A monument honors him in his home state of Kansas.

Last summer, during a Blasi family visit to Alaska, Rocereta flew the soldier's relatives out to the site of the crash. There was an urgency in bringing the family up, Leo Blasi said at the time. Travel was becoming more difficult for his aging father, 85-year-old Frank Blasi, who is Daniel's brother.

"I always had a feeling (Daniel) knew he wasn't ever coming home because the last (time I saw him) — I'd never seen him cry, and I was working for the neighbor out in the field during a harvest, and he came by, told me goodbye, and he cried," Frank Blasi said.

Daniel was tall, blond and stubborn, Frank told the Daily News. He was one of 17 siblings — nine boys and eight girls.

"We all had fun. Back in them days, we worked hard, and played hard," Frank Blasi said.

Frank Blasi said he didn't know what to think when he heard a plane wreckage had been found.

"I was just hoping and praying they'd find something," Frank said. "I've had a stupid dream here lately, that (they're) going to find his dog tag."