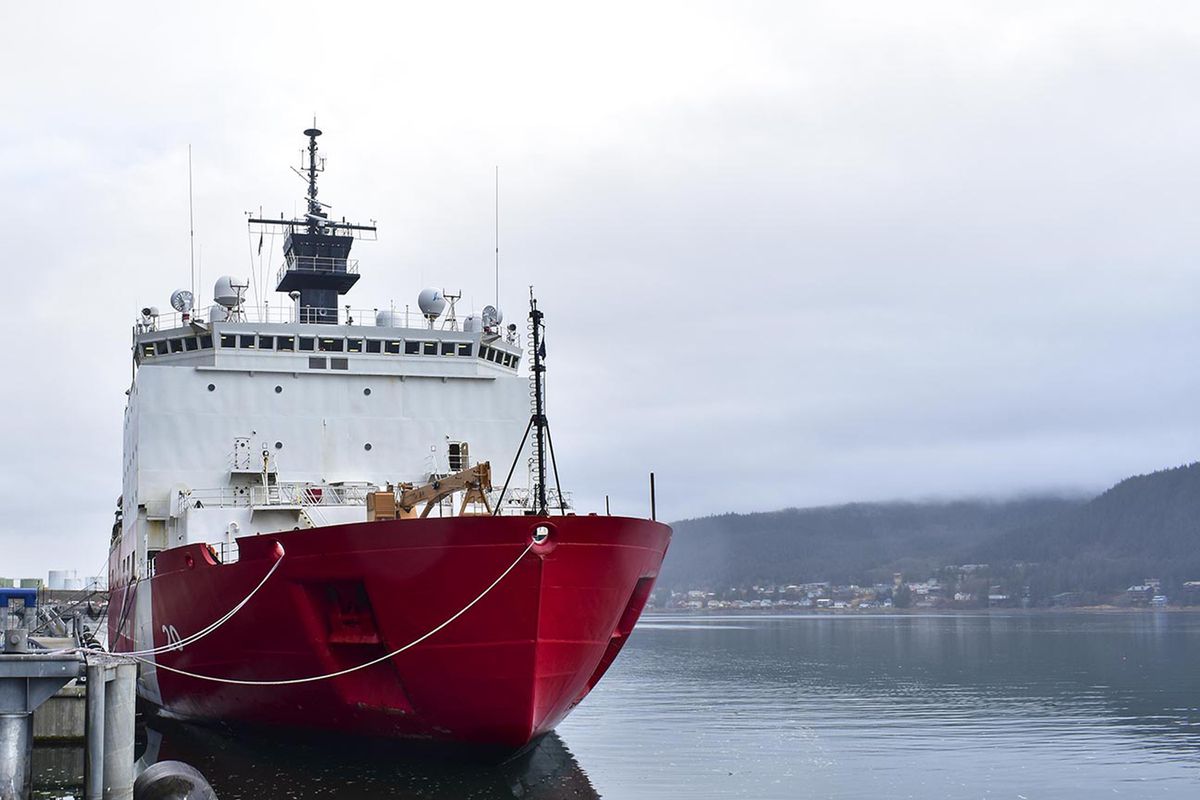 In this photo taken Sunday, Oct. 27, 2019, the USCGC Healy, lies moored to the pier in Juneau. (Peter Segall/Juneau Empire via AP)

In this photo taken Sunday, Oct. 27, 2019, the USCGC Healy, lies moored to the pier in Juneau. (Peter Segall/Juneau Empire via AP)

JUNEAU — The USCGC Healy visited Juneau, mooring downtown Oct. 27 on its way home to its homeport in Seattle.

The Coast Guard's only medium icebreaker, the Healy has been conducting scientific research in the Arctic with researchers from Woods Hole Oceanographic Institute and the University of Washington, said Ensign Trevor Layman, the Healy's public affairs officer.

"We're a completely unique United States Coast Guard vessel," Layman said. Healy is the only one of its class, a modern medium icebreaker built from the hull out to support science missions in the Arctic Ocean.

The Coast Guard’s other icebreaker, Polar Star, is a heavy icebreaker, and mostly supports keeping shipping channels open in the Antarctic, Layman said. The Coast Guard is looking to enhance its ability to operate in the Arctic and Antarctic sea ice with the construction of three medium and three heavy icebreakers called Polar Security Cutters in a recently awarded contract.

The United States military currently has no other seagoing icebreakers.

"If we lose the Polar Star, we lose the power to break ice in the Antarctic," Layman said. "America's icebreaking capability is pretty tenuous right now, so we'll see how things change."

Layman says the ship's unique hullform, called the "ice knife," and horsepower are key to operating in the sea ice of the Arctic. Regular ships aren't built and reinforced specifically to smash the ice like the Healy is, Layman said, which limits their usefulness above the Arctic Circle. The ship is also equipped with a unique bridge in the aft of the ship, to support backing up and ramming thicker ridges of ice, Layman said. The ship also has bow thrusters for precision maneuvers and ice operations.

"The single biggest thing is the shape of the hull," Layman said. The hull is designed to ride up on pack ice and use the ship's weight and forward motion to break through.

The Healy uses this to accomodate the 50 scientists on board as they carry out a number of scientific missions in the Arctic, including biological, meteorological and oceanographic research, Layman said. The science is focused on two main missions, Layman said: biological research in open water, and monitoring the ice itself.

"Our bread and butter is monitoring how the ice is melting," Layman said. "Healy has a bunch of science sensors that have multiplied over time."

The scientists have returned home already, Layman said, flying out of Dutch Harbor with their data while the ship returns to Seattle with the equipment where it can be more easily offloaded.

Healy is also capable of supporting other missions, including flight operations, search and rescue, and even vessel interdiction, although without a combat information center, Layman said, it's most effective as a scientific research vessel. The Coast Guard would use its MH-60 Jayhawk helicopters to resupply the Healy roughly once a week while underway, Layman said.

The Healy will return to its homeport in Seattle as this year’s three-month deployment ends.