‘It’s good that we don’t forget’: Two JBER soldiers memorialized after their deaths in Afghanistan 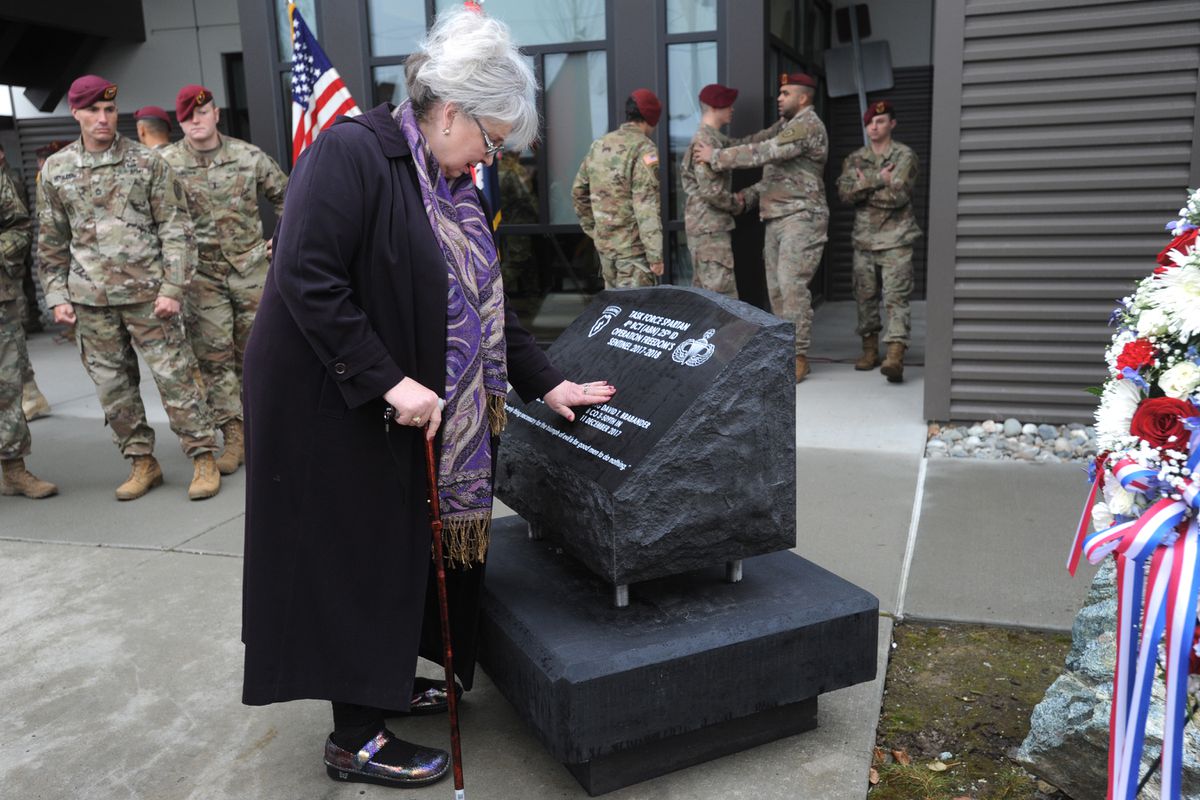 Rena Hite of Wasilla places her hand on the name of her grandson Staff Sgt. David Thomas Brabander during a memorial dedication on Thursday at Joint Base Elmendorf-Richardson. (Bill Roth / ADN)

Rena Hite of Wasilla places her hand on the name of her grandson Staff Sgt. David Thomas Brabander during a memorial dedication on Thursday at Joint Base Elmendorf-Richardson. (Bill Roth / ADN)

Under a gray sky and maroon berets, soldiers at Joint Base Elmendorf-Richardson unveiled a black granite memorial for two of their fallen comrades Thursday.

Brabander, 24, of Anchorage and the Matanuska-Susitna Borough, died when his vehicle rolled over in Nangarhar Province, Afghanistan, on Dec. 11, 2017.

Conde, 22, of Loveland, Colorado, was killed by enemy rifle fire in Afghanistan’s Tagab District on April 30, 2018. The unit would return home from the deployment just weeks after Conde’s death.

The memorial to Conde and Brabander is part of a larger garden featuring similar tributes to dozens of 4-25 soldiers who died during the brigade’s three earlier deployments to Afghanistan and Iraq during the global war on terror.

“Through their actions and their loss, they’ve left an indelible impact on the lives of all of us, whether or not we recognize it,” said Col. Christopher Landers, commander of the 4-25.

The memorial — outside the front door of the brigade’s headquarters — will serve as a “perpetual reminder” of the cost of freedom, Landers said.

A few dozen soldiers and several family members attended the short ceremony, which offered them a chance to share memories of the two men.

Conde’s fellow platoon members said he was notorious for his “old man” interests, like old books and cigars. He was killed while firing his machine gun, they said.

He was a role model and great example of a soldier, Sgt. Dominic Koch said.

Conde was a talented artist and his role as a machine gunner represented his persona, Capt. Dylon Wendt said.

“He was very quiet, but he let his actions speak for himself,” said Wendt, who was Conde’s platoon leader before the unit deployed to Afghanistan in 2017.

[Imperfect answers: JBER soldier Gabriel Conde was killed in action, and his parents ask why]

Soldiers who were in the convoy when Brabander’s vehicle rolled off a narrow mountain road in Nangarhar were glad to see Brabander and Conde’s names memorialized in the garden at JBER.

After the ceremony’s benediction, Rena Hite stepped forward to lay her hand on the memorial, to feel the etching of her grandson’s name in stone. Hite said she helped raise Brabander after his mother died when he was young. Brabander called her “G Mammy,” a name she now has immortalized in a Gold Star license plate.

Brabander gave up a bonus when it was time for him to re-enlist, instead using the opportunity to pick his next duty station, Hite said. He chose to come home to Alaska.

On Thursday morning, a memorial attendee approached Hite, saying they were sorry for her loss.

“I’m sorry for the world’s loss,” Hite replied. “He was a very special young man.”

Later, Hite reached back down to wipe morning dew from the stone’s face. Her hand came to rest on the name of the man being honored with her grandson.

“Gabe’s family can’t be here today," Hite said, "so I’ll be his grandmother.”