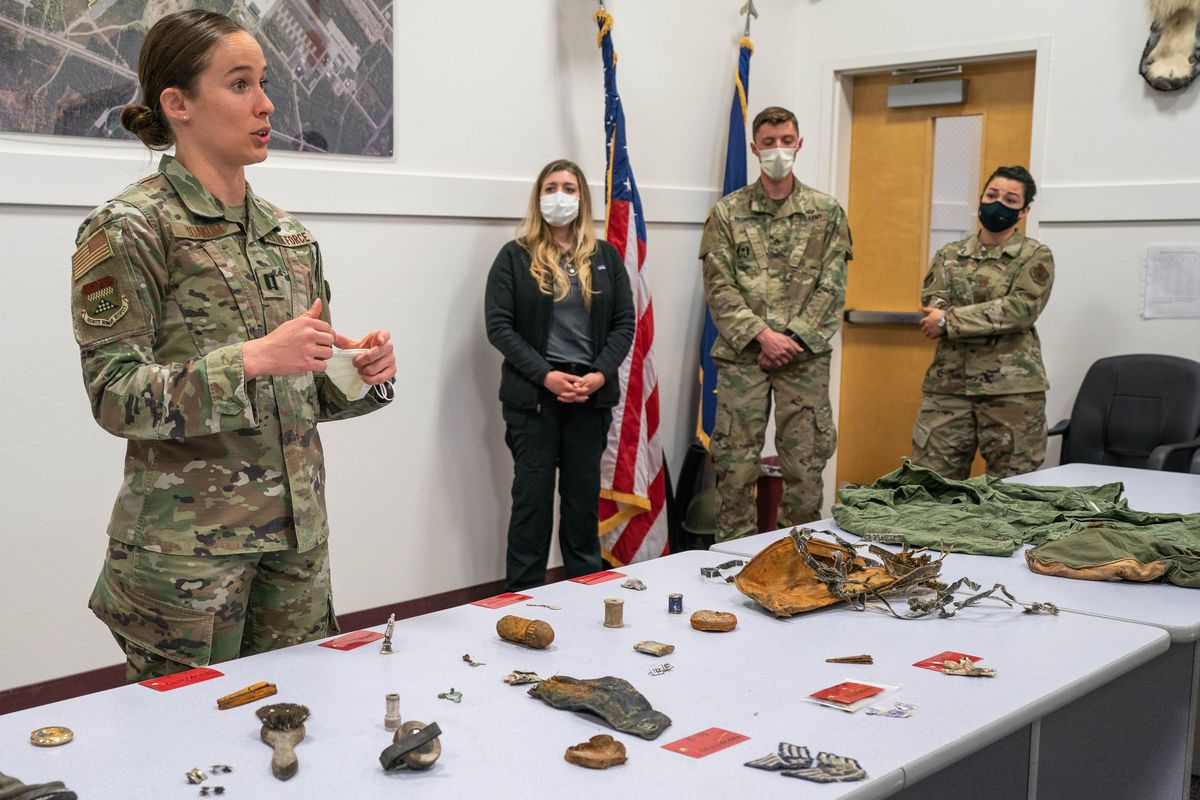 Capt. Shelby Yoakum, Force Commander for Colony Glacier 2020, speaks to reporters at a press conference Friday, June 26, 2020 at Joint Base Elmendorf-Richardson. Capt. Yoakum is based at Dover Air Force Base, which is handling identification of human remains found on Colony Glacier from the 1952 crash of a C-124 Globemaster cargo plane. (Loren Holmes / ADN)

Capt. Shelby Yoakum, Force Commander for Colony Glacier 2020, speaks to reporters at a press conference Friday, June 26, 2020 at Joint Base Elmendorf-Richardson. Capt. Yoakum is based at Dover Air Force Base, which is handling identification of human remains found on Colony Glacier from the 1952 crash of a C-124 Globemaster cargo plane. (Loren Holmes / ADN)

Those were among the items recovered this month from Alaska’s Colony Glacier, where an annual somber search continues for human remains and debris after a military plane crashed 67 years ago, officials said Friday.

The goal is to identify and return remains from everyone onboard the C-124 Globemaster, which smashed into Mount Gannett north of Anchorage on Nov. 22, 1952, killing all 41 passengers and 11 crew members, military officials said Friday at a news conference at Joint Base Elmendorf-Richardson in Anchorage.

The remains of those killed weren’t retrieved at the time, and the plane and all it held slowly fell to the bottom of the mountain, where it eventually became part of Colony Glacier.

The crash was virtually forgotten until a military training mission spotted a yellow life raft on the glacier. Efforts began in 2012 to scour the glacier to see what else may have churned up, including human remains and other debris.

Now, the race is on to identify as many service members as possible before the glacier dumps the wreckage into Lake George, which will become a final resting place for everything that isn’t saved.

Capt. Shelby Yoakum, chief of the Readiness and Plans Division at Air Force Mortuary Affairs Operation at Dover Air Force Base, led this year’s three-week recovery effort at the glacier.

She said they might have only several more years of searching the glacier before the debris field calves into the lake.

“I think we can all safely say that there are still remains out there that have yet to melt out of the ice, and that we will be back for at least the next few years to continue this mission, especially since we have not identified all 52 that passed away,” Yoakum said.

The last area they found remains this year was about 656 feet (200 meters) from the toe of the glacier, where the ice falls into the lake.

Officials could not say when all the remains and debris from the glacier would be lost to Lake George.

“The reality of the situation is all of the debris and the remains are constantly falling to crevasses, big and small, and moving down to the toe of the glacier faster than some,” said Army Staff Sgt. Isaac Redmond, who was the mountaineering subject matter expert for the excavation.

The human remains will be respectfully shipped to Dover in transfer cases, about the same size as caskets, and draped with flags. At Dover, the process will begin to match DNA from the remains to samples that surviving family members have provided at the Armed Forces DNA Identification Laboratory.

It’s not known how many of the nine service members who have not had matches yet could be among these remains or how long it might take to get results.

“We’re hopeful that we’ll at least get a couple of new IDs out of this,” said Katherine Grosso, a medicolegal investigator with the Armed Forces Medical Examiner System. “There will always be reassociated remains from previously identified service members, and so we’ll be able to provide those, as well, to the families.”

Tonja Anderson-Dell of Tampa, Florida, continues to lobby for the families of the nine service members whose remains haven’t been found, even after her own journey had closure.

For years, she waited for the military to identify the remains of her grandfather, Isaac Anderson, who was 21 when the plane when down.

After years of attending services for others whose loved ones were on the plane and laid to rest, in late 2018, she received word her grandfather’s remains had been found. A memorial service was held the following May.

“That was overwhelming,” she said by telephone Friday. “I finally got to see it. I’ve been to so many services and to now have my grandfather come home — very emotional for myself and for my father.”

She plans to continue being an advocate for the families but says some may never get their loved ones.

“I know that in my heart there may be one or two because it just may be that way, but I’m hoping that all of them get closure, you know, to know that it has been found,” she said.