A Trump protest, fueled by social media, ends in violence 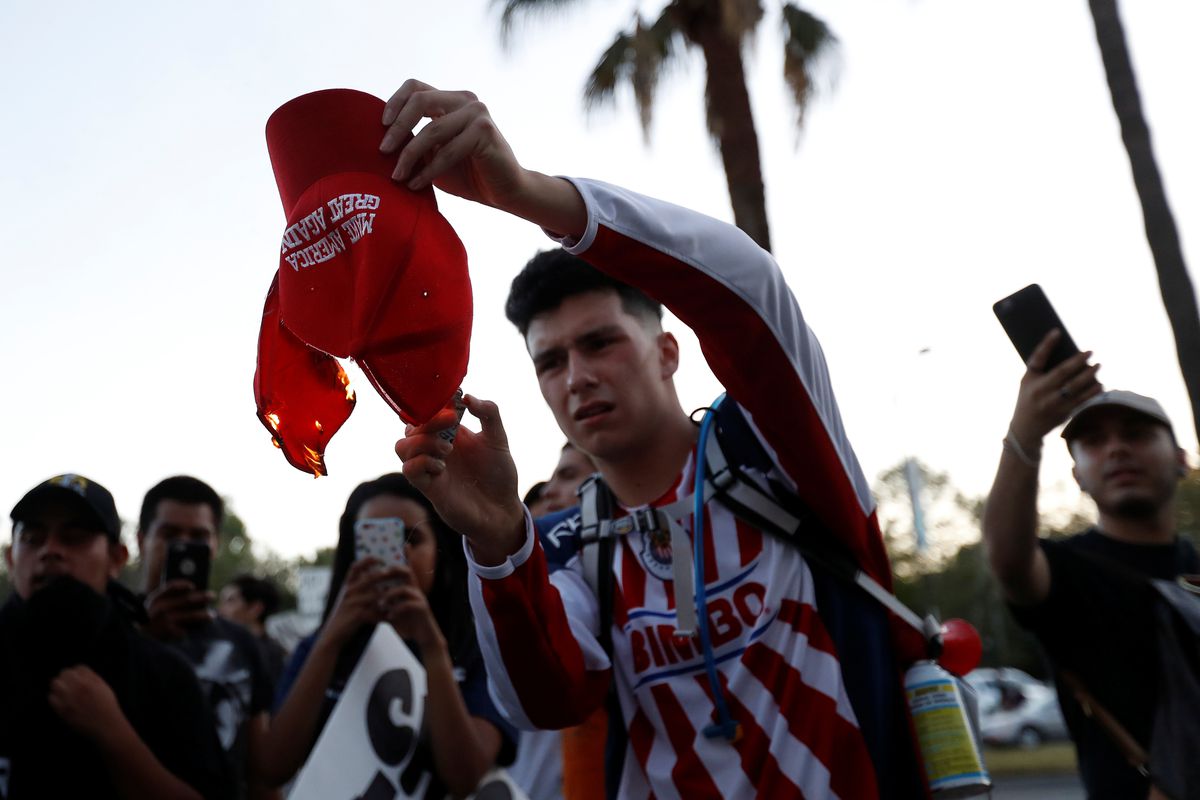 REDDING, Calif. — When Mathew Gonzales, a Latino musician from San Jose, heard that Donald Trump was coming to town, he knew he had to do something.

Unwilling to let the presumptive Republican nominee's visit pass quietly, he launched an event page on Facebook to organize a protest titled "Manda A Donald Trump A La Chingada" — Spanish for "Send Donald Trump to Hell."

Two days later, Gonzales and more than 100 other protesters who visited his page arrived at the arena in San Jose where Trump would be speaking and jeered his supporters through a megaphone. The taunting at Thursday night's rally turned violent, with some of Trump's backers beaten and "Make America Great Again" hats set on fire.

"I saw he was coming and thought, 'We got to go out and speak against him,'" said Gonzales, 31, who avoided the violence that ensued. "He's obviously not representing what we're all about here in San Jose. San Jose is very based on immigrants and stuff like that."

While Trump has blamed paid "disrupters" and operatives from Hillary Clinton's and Sen. Bernie Sanders' campaigns for such protests in the past, the violence at this rally and the protest that inspired it appeared spontaneous and not directed by Democrats or other groups. Instead, it was more the product of independent local efforts that caught fire through social media.

Such episodes, like a protest in April in Burlingame near San Francisco and at an abruptly canceled March rally in Chicago, represent some of the most significant unrest during a presidential contest since 1968, when violence erupted in the streets outside the Democratic National Convention in Chicago at the height of the Vietnam War.

Gonzales' group was one of many that arrived Thursday to express disapproval of Trump, who has irritated many critics with proposals they consider to be anti-immigrant. While protest organizers and attendees said that violence was not their intention, clashes with Trump's supporters have become increasingly common.

The disturbances are the result of a combustible mix: the passion of the anti-Trump movement and, on the other side, the often fiery oratory of Trump himself, who at a rally this year in Cedar Rapids, Iowa, went so far as to urge his supporters to "knock the crap" out of protesters at the event.

On Friday, Trump, who has taken some measures to quell violence inside his events, lashed out at those who created the chaos at Thursday's event. At a rally in Redding, California, Trump said his supporters "got accosted by a bunch of thugs burning the American flag."

The genesis of Thursday night's protest through social media suggests that tensions accompanying Trump's rallies are likely to continue.

Michael Joseph, 27, a community organizer, learned that anti-Trump protests were planned for Thursday's rally from his Facebook news feed. A Native American who supports the Democratic campaign of Sanders and loathes what Trump has said about both women and immigrants, Joseph said he was appalled by the violence that he saw against supporters of Trump and did his best to break up the melee.

"There's no justification in hurting others whatsoever, regardless of your political stances," said Joseph, who attended the protest with three friends. "I'm pretty disgusted with last night's 'Dump Trump' protests."

Joshua Tucker, a New York University political science professor who studies social media and political participation, said protest movements that develop on their own, rather than ones organized by a single leader, can be more chaotic because people are reacting to what happens on the street and are given little guidance on decorum.

According to those who attended, the several hundred people outside Trump's rally were a mix of immigrants' rights groups, union workers, members of nonprofit organizations and individuals who wanted to voice their concerns.

The attacks on Trump's supporters could have some political benefit for the presumptive Republican nominee, whose backers have been accused of being unruly at his events during the campaign. Embracing the role of the victim, Trump has been able to paint his critics as the ones sullying the democratic discourse.

The protests are also problematic for Democrats. Clinton, who has accused Trump of inciting violence in the past, faced the awkward situation of having to denounce the actions of people speaking out against her likely opponent in the general election.

"I condemn all violence in our political arena," Clinton said in an interview with CNN. "I condemned it when Donald Trump was inciting it and congratulating people who were engaging it. I condemn it by those who are taking violent protests to physical assault against Donald Trump."

The precise cause for the violence Thursday night remains unclear. Some protesters claimed that supporters of Trump instigated it, while others who were there said the violence was escalated by the sudden presence of a few local gang members.

For Cesar Juarez, an undocumented immigrant from Mexico who teaches at a high school in San Jose, the protest was a teaching moment that went awry. After one of his students told him about the protest, he decided to take a group from the school so they could experience the political process in person. But once fists were thrown, he had to abruptly end the class trip.

"I kind of sensed that this crowd was getting too rowdy so I told them let's leave," he said.

However the protests have come together, they are unlikely to abate any time soon. While Trump was speaking Friday in an airplane hangar in Redding, some 88,000 people were talking about "Stop Trump" on Facebook. Officials in Cleveland are bracing for rowdy streets during the Republican Party's convention next month.

And Trump has little chance of avoiding protesters when he embarks on his overseas trip this month. An opposition group has created a "Stand Up to Trump" Facebook page to organize a frosty welcome for the candidate in Ireland. So far, more than 215 protesters have signed up to attend.