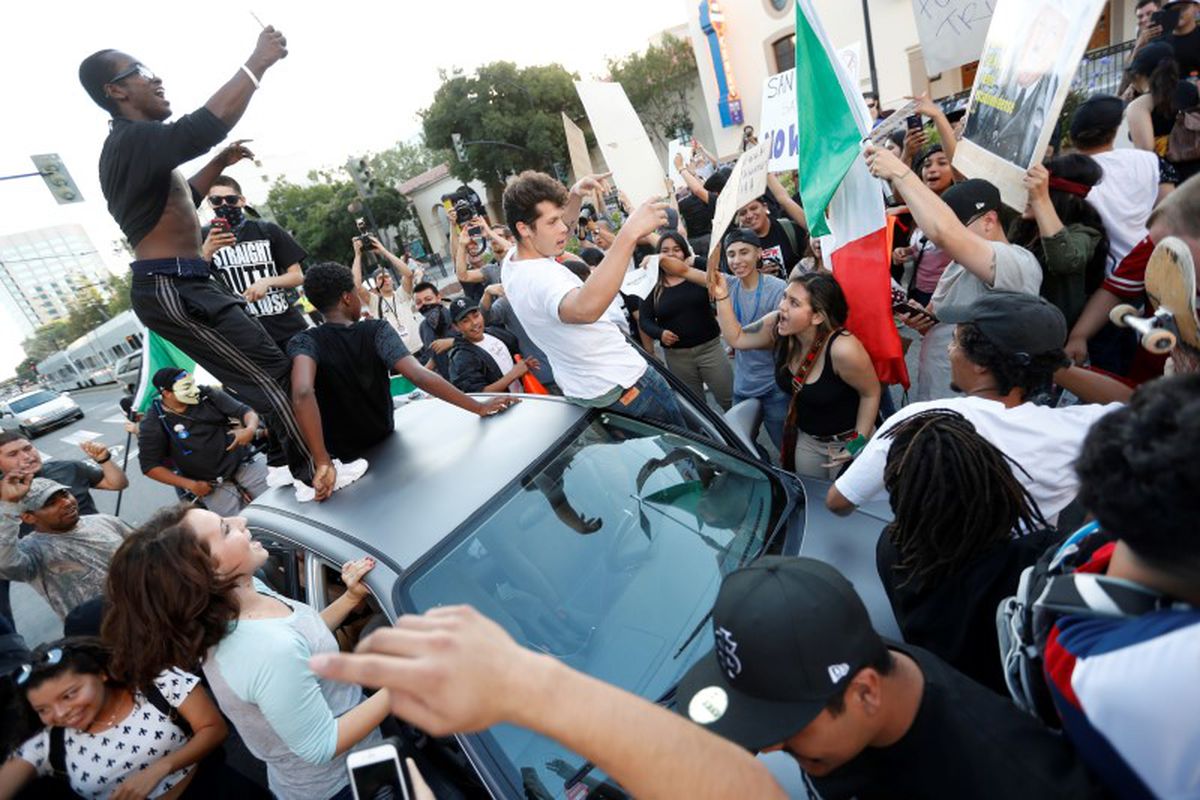 SAN JOSE, Calif. — Protests outside a Donald Trump rally in downtown San Jose spun out of control Thursday night when some demonstrators attacked the candidate's supporters.

Protesters jumped on cars, pelted Trump supporters with eggs and water balloons, snatched signs, and stole "Make America Great" hats off supporters' heads before burning them and snapping selfies with the charred remains.

Several people were caught on camera punching Trump supporters. At least one attacker was arrested, according to CNN, although police did not release much information.

"The San Jose Police Department made a few arrests tonight after the Donald Trump Rally," police said in a statement. "As of this time, we do not have specific information on the arrests made. There has been no significant property damage reported. One officer was assaulted."

In one video circulating widely on social media, two protesters tried to protect a Trump supporter as other protesters attacked him and called him names.

Another video captured a female Trump supporter taunting protesters before being surrounded and struck in the face with an egg and water balloons.

Police eventually cleared the protest, which they called an "unlawful assembly."

[How getting outsourced at UAA helped me understand Trump's appeal]

The incidents were the latest in a series of increasingly violent altercations between protesters, Trump supporters and police at the presumptive Republican nominee's campaign events. A week ago, it was Albuquerque descending into chaos as the city was shaken by raucous riots and arrests outside a Trump rally. A month earlier it was Costa Mesa, Calif.

Thursday was San Jose's turn to take center stage in what is quickly becoming a traveling fiasco.

Before the event, San Jose Police issued a press release saying it "recognizes and respects everyone's right to express their First Amendment, and we will do everything possible to ensure the event is safe for all attendees and surrounding neighborhoods."

As the night unfolded, however, it became clear that the chaos seen at Trump campaign stops across the country had found its way to San Jose.

Trump supporters were surrounded and, in several cases, attacked as they left the rally.

In one incident captured on camera, a Trump supporter was struck hard over the side of the head as he was walking away from a group of protesters. The attack left him with blood streaming down his head and onto his shirt.

"I was walking out with a Trump sign and he grabbed my Trump sign, saying I was like a racist and stuff," the man told bystanders and local media. "Then he followed me, like, spit on me."

The Trump supporter said all he had done was chant the candidate's name before trying to walk away.

Another Trump supporter was also bloodied after being attacked, his shirt torn almost completely off his body. Videos circulating on social media showed swirling, furious fights spilling from street corner to street corner, often with no police in sight.

Marcus DiPaola, a freelance photographer following the Trump campaign, posted video of someone getting punched in the face.

Reached by phone Thursday night, DiPaola said the sucker punch happened at 8:08 p.m. just outside the convention center where the Trump rally was held.

"It wasn't completely unprovoked," he said. "The guy with the flag was waving it in front of the victim's face. The victim kind of pushed the flag out of the way and then walked quickly away. You saw what happened next."

DiPaola said he called 911 but was put on hold and so hung up. He said he told one police officer about the beating but was told SJPD "didn't have the man power" to intervene.

DiPaola wasn't the only journalist to condemn the cops' handling of the protest.

Many of the protesters were peaceful. Some waved Mexican flags in an apparent response to Trump calling Mexican immigrants "rapists."

According to the San Jose Mercury News, many of the protesters were Latinos from East San Jose opposed to what they saw as racism from the GOP candidate.

ABC reporter Tom Llamas, however, reported that some of the protesters were "throwing up gang signs."

"There were [people] who came to demonstrate & some who just wanted to brawl," he tweeted, adding that "This was by the most violent demonstrations we've seen."

At times, protesters began to fight among themselves. In one instance, two female protesters pleaded for non violence while trying to protect a Trump supporter from an angry crowd. Despite their efforts, someone snatched the Trump supporter's hat.

A handful of the bright red "Make America Great Again" hats were set on fire by protesters, who then snapped photos of the scene or hung the charred hats from street signs.

Some protesters said they were disappointed to see violence undermine their message.

"It's sad to see San Jose representing like this," student Martha Garcia told the Guardian. "Trump is the one igniting the hate. You can't fight fire with fire."

Perhaps the most jarring scene was that of a young female Trump supporter being attacked by a crowd of protesters.

In multiple videos of the incident, the woman initially appeared to be happily posing in her Trump football jersey in front of the mostly male protesters, some of whom can be heard whistling and shouting at her.

Then an anonymous arm rises over the crowd and tosses an egg at the woman, striking her in the head and eliciting howls and laughter from the crowd.

A second later, a red water balloon bursts against the woman's arm.

At first, the woman tries to shrug off the attacks, smiling while appearing to reach out towards the Mexican flags that some protesters are waving.

Objects keep crashing into the convention center windows behind her, however, and protesters can be heard screaming expletives at her.

Suddenly, another projectile strikes her hard in the face. Eventually, someone comes to help her and, after she indicates that she is having trouble seeing, she is ushered back inside the convention center.

The ugly scenes of violence toward Trump supporters Thursday appeared to be the inverse of similar incidents earlier in the campaign in which Trump protesters, not supporters, were targeted.

The sucker punch captured by DiPaola, for instance, echoed an incident in March when a 78-year-old Trump supporter sucker punched a protester at a rally in Fayetteville, N.C.

Hillary Clinton and Bernie Sanders's campaigns both condemned the violence in San Jose. John Podesta, chair of Hillary Clinton for America, tweeted that "violence against supporters of any candidate has no place in this election."

Mike Casca, Sanders' rapid response director, tweeted that "we cannot stop Trump's violent rhetoric with violence – only peaceful protest in a voting booth can do that."

Blame for the attacks circulated almost as rapidly as images of the violence, with Trump supporters accusing Democrats and members of the media of having a double standard.

Many liberals, meanwhile, including the Democratic mayor of San Jose, suggested that Trump angry and divisive rhetoric made him at least partly responsible for the violence at his events.

"At some point Donald Trump needs to take responsibility for the irresponsible behavior of his campaign," Mayor Sam Liccardo told the Associated Press, praising the city's police while adding that "we're all still holding our breath to see the outcome of this dangerous and explosive situation."

Things inside the rally were more subdued — if only slightly.

Politico reported that one of its reporters had been removed from the rally for reporting at the event without the campaign's permission.

Trump, meanwhile, was interrupted a handful of times by protesters.

Responding to Clinton's blistering attack on him earlier in the day, Trump attacked her over her email controversy, going so far as to say "Hillary Clinton has to go to jail."

"She does not look presidential — that I can tell you," he said, according to Bloomberg. "This is not a president. Four more years of this stuff and we're not going to have a country left."