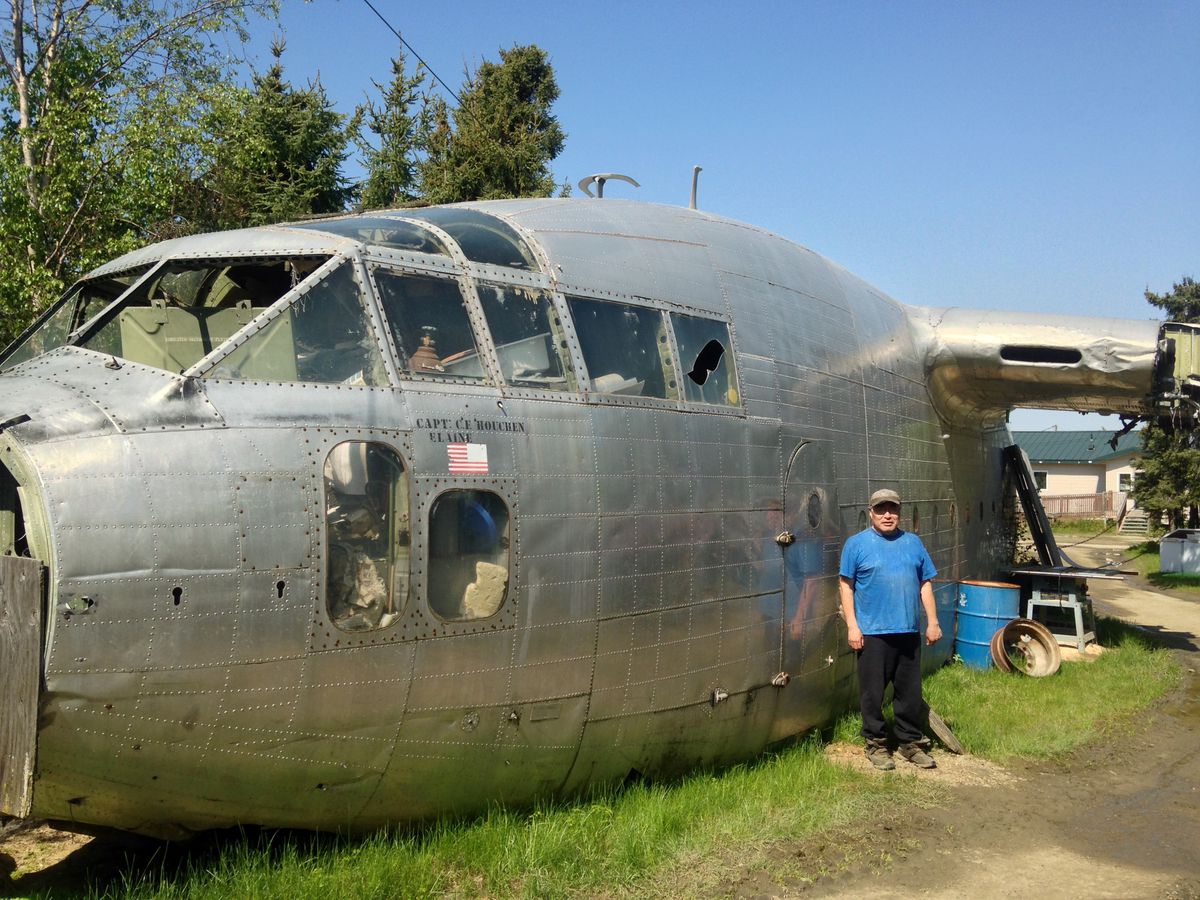 SHAGELUK — When an old military plane crashed in this tiny Interior village decades ago, Rudy Hamilton saw an opportunity to fulfill two dreams with one defunct aircraft.

The damaged Fairchild C-119 was fated to become garbage. Instead, Hamilton built the workshop he had always wanted, realizing his goal of owning a plane — even if it wasn't a functioning one.

The carved-out shell of the plane on Hamilton's property is an inconspicuous landmark in the rural community. But fly overhead and the fuselage can be seen tucked between the houses and trees — a massive and gleaming silver bullet.

When the Iditarod comes through town, the plane becomes something of a tourist attraction, Hamilton said. He doesn't mind — as long as people ask permission to take photos on his property.

Hamilton's plane is one of just over 1,000 Fairchild C-119s built for military use in the late 1940s and 1950s. The planes were nicknamed "flying boxcars" due to their boxy appearance and cargo-hauling ability. Hamilton's was built in 1953, according to FAA records. In the 1970s, the massive cargo planes were taken out of military rotation.

Some were sold to the U.S. Forest Service, which used them for firefighting, until a plane broke apart in mid-flight in 1987, killing three people and spurring the Forest Service to ground the fleet.

Other C-119s were sold to cargo companies; about 20 C-119s were flying in Alaska starting around 1980, mainly hauling construction materials, according to a website dedicated to the aircraft's Alaska history. The aircraft that would eventually become Hamilton's was one of those planes.

"The blaze started in the gym shortly before 5 a.m. and spread. … The gym and the main part of the school building burned to the ground," says a Daily Sitka Sentinel article from March 16, 1987.

Work on school reconstruction began soon afterward. Shageluk is off the road system, so materials were flown in. The C-119, at the time commissioned by a contractor, was enlisted to bring in supplies.

"The pilot touched the airplane down short of the runway proper, collapsing the landing gear before sliding off the strip into adjacent tundra," the National Transportation Safety Board accident report says.

None of the five people aboard the plane were injured. The plane, though, wasn't going anywhere. The spar, a main structural component of the wing, had broken. With the airplane unable to fly, the company had planned to trash it, Hamilton said.

"The company called me up and said, 'Can you get rid of it?' " Hamilton recalled. "I said no, I want to buy it. I want a bill of sale because I want to own my own airplane."

He bought the plane for $1, Hamilton said. The last aircraft owner, before being deregistered in 1987, is listed as Alaska Aircraft Leasing Inc., according to FAA records.

The company gutted the plane before Hamilton dragged it onto his property. There are no gears, no instrument panels, no pilot seats left.

He had plans — "I always wanted my own shop," Hamilton said — but first, he knew he had to quell curiosity from kids in the town.

For one day, he opened up the fuselage to anyone who wanted to see it.

"They all came over and everyone ran through it," Hamilton said. After that, it was "out of their system."

Inside, the workshop is about 9 feet wide and 8 feet tall. It's cluttered with tools, equipment, books. The workshop is insulated and the walls are framed with plywood. A Toyo stove sits in one corner. He left the original metal flooring.

Hamilton, who says he tries not to take life too seriously, jokes that his "ace in the hole" — should he ever need the money — is to sell the plane as the "largest aluminum can around."