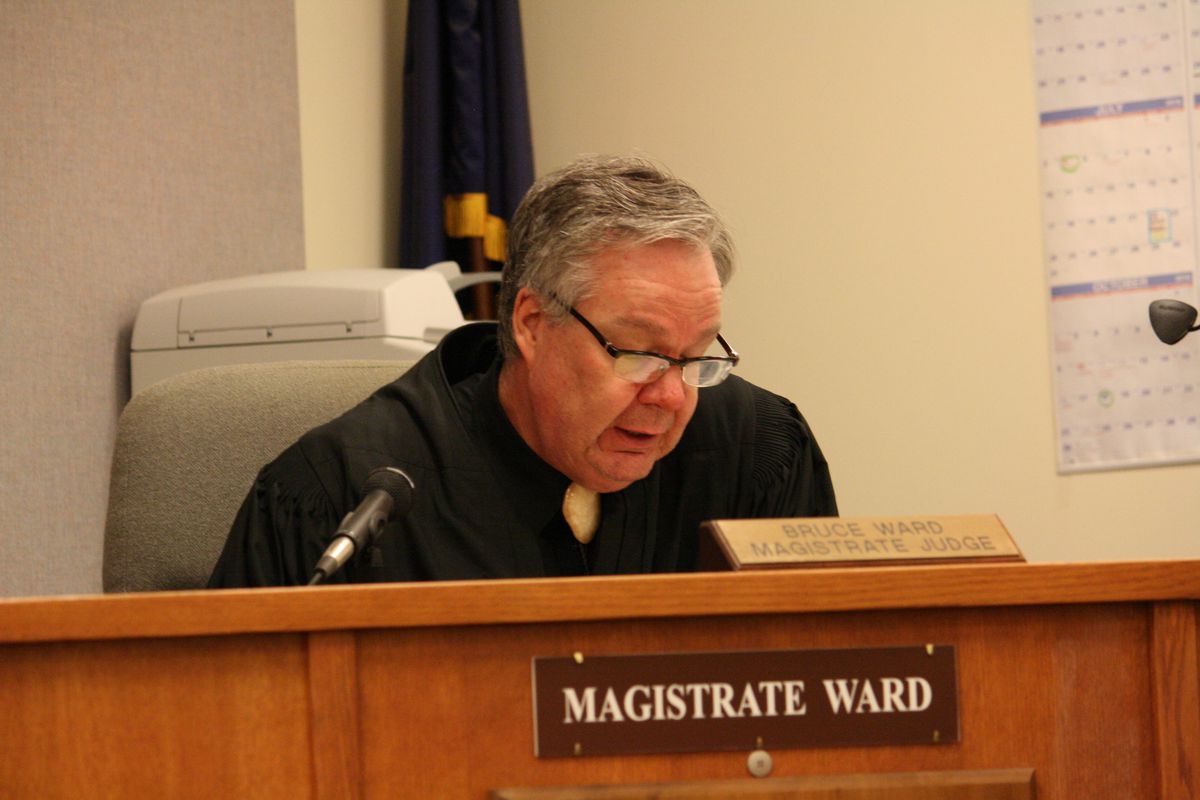 Magistrate Judge Bruce Ward says in Bethel District Court on Wednesday that without a video of the assault on Wassillie Gregory, former police officer Andrew Reid might still be on the force. (Lisa Demer / Alaska Dispatch News)

Magistrate Judge Bruce Ward says in Bethel District Court on Wednesday that without a video of the assault on Wassillie Gregory, former police officer Andrew Reid might still be on the force. (Lisa Demer / Alaska Dispatch News)

BETHEL – Andrew Reid, a former Bethel police officer, faced justice as the defendant Wednesday when he was sentenced to serve time for a July 2014 assault on an intoxicated Alaska Native man in the Alaska Commercial Co. store parking lot in central Bethel.

Reid, who was on duty that day, pleaded guilty by telephone in Bethel District Court to two misdemeanor charges — fourth-degree assault and official misconduct — from his rough arrest of Wassillie Gregory. Reid didn't say where he was calling from but his Anchorage attorney, Wally Tetlow, who also called in, said he was living on the East Coast.

Reid, now 40, eventually lost his Bethel police officer job after the assault on Gregory. He slammed or threw the man to the ground at least nine times, as seen on an AC security video showing the arrest, prosecutor Rob Henderson said.

The FBI led the investigation through its civil rights program that addresses official misconduct, including excessive force by police. Henderson, with the state Office of Special Prosecutions and Appeals, and FBI special agent Kirk Oberlander traveled to Bethel for the hearing, which lasted about an hour.

Reid's behavior violated the public trust and hurt the entire community of Bethel, Henderson said. Then Reid lied about what he did, the prosecutor said.

The incident on July 12, 2014, came just as the nation was becoming newly attuned to complaints of police brutality and disintegrated relationships between law enforcement officers and minorities, especially African-Americans. Just weeks later, in August that year, tensions boiled over after the shooting death of Michael Brown in Ferguson, Missouri.

On Wednesday, Reid was forgiven by the victim's sister.

Others may not agree but "for me to go forward, I have to forgive you for what you did," Agnes Gregory said in court, addressing the distant Reid. "As a human being, I only wish the best for you." She spoke in a soft firm voice, then went back to her seat in the courtroom and let herself cry. She said later she was thinking of what was on the video, all that her brother had been through.

Wassillie Gregory, now 50, knew about the hearing but didn't make it there. In the assault, he suffered a separated shoulder that required surgery to repair. He has long struggled with drinking and has been in and out of trouble. He is broken in other ways, too, his sister said. Gregory lives with her.

"Everything that happened on that day will affect him for the rest of his life," Agnes Gregory said later.

When his turn came, Reid said he was 4,000 miles away but wanted to give her a big hug and shake Gregory's hand. He said he accepted responsibility.

"I wish I could have served Mr. Gregory better that day," Reid said. "I am willing to accept whatever the court puts on me."

His words made a difference, Agnes said.

Reid's actions have been scrutinized before. While on the Bethel force, Reid shot and killed an armed man in October 2012, almost two years before the assault on Gregory. The shooting was found to be justified, Tetlow said. Yet the stress and aftermath of that deadly encounter weighed on him more than he knew, the lawyer said.

Reid since has been diagnosed with post traumatic stress disorder. He has been getting counseling and is on medication, Tetlow said.

Reid had known Gregory as a man with a history of trouble, who had gone to court repeatedly for disorderly conduct and assault, Tetlow said.

"This did not occur in a vacuum," he said.

Back in 2014, Reid told a different story about what happened in front of the AC store. He wrote in his police report that he "kindly assisted Mr. Gregory to the cruiser" and he used verbal commands and "soft-handed techniques" before resorting to pepper spray.

"That's just not what we see in the video," Henderson told Magistrate Judge Bruce Ward.

After a visiting professor from Arizona reported to police that she saw an officer body slam a man in front of the store, Reid was interviewed. He told his sergeant that no one was thrown to the ground, Henderson said.

"It shows a terrible lack of candor," the prosecutor said.

Had the video had not surfaced, Reid would probably still be a police officer, Ward said.

"His deception to the department and to others would have continued undiscovered. That deception tarnishes every police officer who wears the uniform. It creates distrust in the community," the judge said.

Other officers face more difficult situations and are put at risk because of what Reid did, Ward said.

Ward sentenced Reid to serve 120 days. That is less than the 180 days that prosecutors and the defense had originally agreed to. A new state law, Senate Bill 91, that caps jail time for minor offenses cuts the amount for official misconduct to 30 days, when the agreement was for 90 days on that charge, Henderson said.

Tetlow said Reid will ask the Department of Corrections to serve his time remotely on an ankle monitor rather than in jail.  If the department turns that down, Reid must return to Bethel and report to Yukon Kuskokwim Correctional Center by Feb. 1, Ward said.

Another 90 days of jail time was suspended. Reid also will serve three years of probation.

He must get a mental health evaluation and undergo treatment. He also must repay the state $13,593 for unemployment benefits he wrongly collected.

He also will have to pay restitution to Gregory of an amount to be determined.

Gregory already received a $175,000 civil settlement from the city of Bethel. A harassment conviction against him from the incident was dismissed last year.

The money hasn't really helped, his sister said. Mainly, she said, he drinks it away.