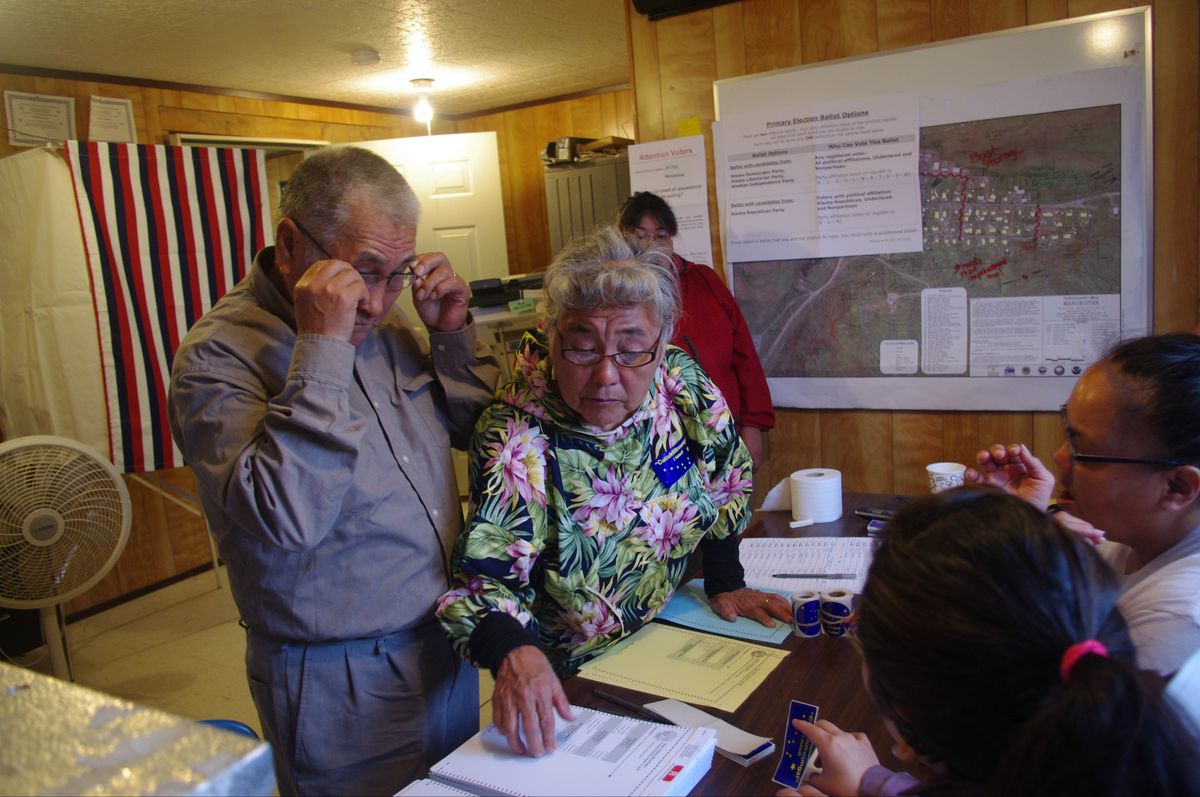 Anecia Toyukak points out ballot options to her husband, Mike, before he votes in Alaska’s primary election on Aug. 16, 2016, in Manokotak. (Molly Dischner / Bristol Bay Times)

Anecia Toyukak points out ballot options to her husband, Mike, before he votes in Alaska’s primary election on Aug. 16, 2016, in Manokotak. (Molly Dischner / Bristol Bay Times)

Before choosing a primary ballot at a polling place set up at the Manokotak City Office this week, Mike Toyukak glanced at two sample ballots offering Yup'ik translations of the English ballots available for voters to chose from.

From signing for his ballot to depositing it into the ballot box, it only took Toyukak a few minutes to vote. But the scenario he encountered — the Yup'ik language sample ballots, an interpreter on hand had he needed one, and even a Yup'ik glossary of terms available for the poll workers to refer to — were years in the making. And Toyukak was at the heart of the change.

His first language was Yup'ik. And for years, when he went to vote he was confronted with an English ballot, and difficulty understanding all the nuances it contained. Although he knows some English, he also knew that others were having an even more difficult time with the language.

So in 2013, the Native American Rights Fund filed a lawsuit against the state on behalf of Toyakuk and others, including the Togiak Traditional Council, asserting that any election information provided in English should also be provided in Yup'ik, Inupiaq and Gwich'in, the language of the Athabascans of Alaska's Interior.  They won the voting rights case, and after a lengthy settlement process, in 2015 the state of Alaska agreed to provide a dozen language assistance provisions for 29 communities at each election through the 2020 general election.

On primary day this year, the language assistance specified in those provisions was available for the first time in more than 100 communities around Alaska, including the 29 identified in the Toyukak settlement, which are in the Dillingham, Kusilvak and Yukon-Koyukuk census areas. The state already provided language assistance in the Bethel region, and translated the official election pamphlet into Spanish and Tagalog, one of the languages of the Philippines.

When Toyukak visited the polls on Aug. 16, there were several onlookers: Lt. Gov. Byron Mallott, the state's language compliance manager Indra Arriaga and Bristol Bay Native Corp. board members Joe Chythlook and Pete Andrew, along with a Department of Justice observer.

Although the federal observer was on a separate schedule, other visitors traveled together to three communities — Manokotak, Togiak and New Stuyahok — to see how the language assistance played out. In those villages on primary day, all of the assistance requested was in Yup'ik. Mornings at many voting sites are slow, and Manokotak and Togiak were no different, with a slow trickle of voters, including first-time voters who had grown up speaking English, and elders who spoke only in Yup'ik while at the poll. In New Stuyahok, six had requested help by mid-afternoon, said elections worker Anita Gust.

"I think it's helping, because you know, we got a lot of old people that only speaks the Yup'ik language," she said. "Thank god that we have people that can speak both Yup'ik and English."

Although the materials available in New Stuyahok, Togiak and Manokotak were all the same, polling places in other communities had differently tailored materials and interpreters with region-specific language abilities. The provisions included the Yup'ik glossary, which includes seven dialects: Bristol Bay, Chevak, General Central, Hooper Bay, Norton Sound Kotlik, Nunivak and Yukon.

Toyukak and his wife, Anecia Toyukak, helped develop the election term glossary along with speakers of several other dialects. It translates terms such as "deadline," "Election Day," "lieutenant governor" and "questioned ballot" into each dialect.

Through an interpreter in Manokotak on Aug. 16, Toyukak said he was glad to see the changes come to fruition and help people in his region vote. When the ballot was harder to understand, people were less likely to go vote, he said.

"When people heard (about the changes) they got a lot more excited to be part of the process," Dillingham's Joe Chythlook explained for Mike Toyukak. "Knowing that they understand better what they're voting for, and understanding that it's a process that they could use to address Native concerns, not just the white man's concerns. So it's good for the area, good for the village, good for the people."

During the conversation in Manokotak, Mallott said the state wanted to provide that sort of access to the process for all Alaskans. The primary was something of a test run, to make sure that the state is ready for regional educational attendance area elections in October and general elections in November, he said.

The November ballot will include ballot measures, not just candidates, which means more words and ideas for voters to decipher. After the primary election, Mallott met with federal observers to debrief, and said some additional changes will be enacted for future elections, including the possibility of expanding where language assistance is offered.

"… The state needs to be absolutely dedicated to making sure that every qualified voter is able to understand what they are voting on," Mallott said. "So that's something we are working as hard as we can to make sure it can happen. And this election is a big test."