What became of the places where Alaskans were held captive in WWII? A historian traveled to Japan to find out. 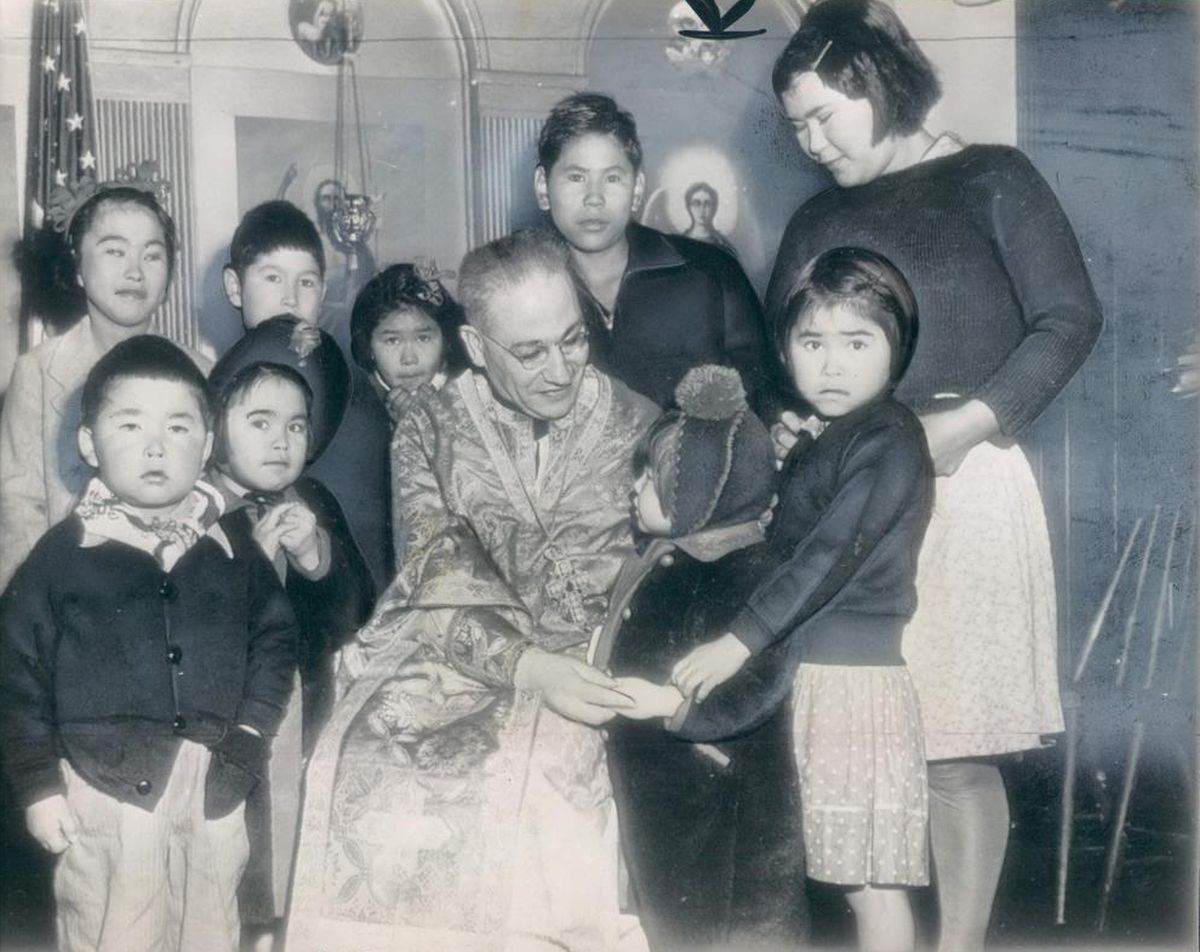 Attu children in Tacoma, Wash., following their release from Japan at the end of World War II. The girl in the hat touching the priest’s hand is Elizabeth Golodoff Kudrin, now one of two survivors of the internment. (Photo from Betty Bendixon, courtesy Rachel Mason)

Attu children in Tacoma, Wash., following their release from Japan at the end of World War II. The girl in the hat touching the priest’s hand is Elizabeth Golodoff Kudrin, now one of two survivors of the internment. (Photo from Betty Bendixon, courtesy Rachel Mason)

Forty-two Aleut villagers from Attu, taken as prisoners by the Japanese Army when it invaded Alaska in 1942, were transported to Japan. Housing was poor and food scarce.

Those capable of labor were put to work mining clay. Many died over the course of nearly three years before they were liberated upon the surrender of Japan in September 1945.

The internees from Attu were the only American civilians captured in North America and held by the enemy in World War II.

Now uninhabited, Attu Island is part of the Alaska Maritime National Wildlife Refuge. The battlefield where thousands of Japanese and American troops fought and died is a national historic landmark.

The homes, church and school that once constituted the village of Attu is marked only by a seldom-visited plaque. But the place remains an honored site in the memory of Alaskans who know its historical significance.

But what of the sites where the Attuans were taken? How are they identified and remembered today?

Last summer, Rachel Mason found out. Mason works for the National Park Service in Anchorage and has been instrumental in reclaiming Aleutian Island history at risk of being forgotten.

She played a major role in indentifying "lost villages," communities that were vacated during World War II and never resettled. She helped arrange the publication of "Attu Boy," a memoir by internment survivor Nick Golodoff, and a reunion of descendants of the prisoners of Attu.

But checking out the internment sites in Japan was done on her own dime. "I went to Japan on a summer vacation and got the idea of trying to retrace the footsteps of the internees in Hokkaido," she said.

Hokkaido is Japan's large northern island. Mason described it as "the Alaska of Japan. The climate is a lot like the Aleutians, colder even. You can see Russia from the north coast."

The Attuans were brought to the city of Otaru on Hokkaido, about an hour's drive from the Municipality of Chitose, which happens to be one of Anchorage's "sister cities." With help from University of Alaska Anchorage professor of Japanese Hiroko Harada, Mason made contact with officials of Chitose, who supplied staff as guides.

Using old addresses and GPS they located the first of the facilities where the Alaskans were housed in Japan, a two-story wooden building Mason thinks was a railroad dormitory at one time. Here the Attu prisoners were guarded by one or two policemen most of the time.

In old photos of the dormitory it appears it's about to fall down. But it still stands, somewhat altered, but recently in use as a single family home. Now vacant, it was scheduled for demolition at the time of Mason's visit.

The second place was a former Shinto monastery. Attuans recalled speaking to priests while they were there. At this location, Mason found a Shinto shrine and a ginko tree. Nick Golodoff recalled eating fruit, perhaps sour apples or apricots, he thought, that fell from trees outside the building.

The odor of the flesh of the fruit of a ginko tree has been compared to dog excrement and the plant contains the same toxins as poison oak. The nut, however, is roasted and eaten. "I guess it's edible," Mason said. "But it smells terrible."

The Attuans were hungry, like everyone else in Japan, Golodoff told the Alaska Dispatch News in an interview before his death. Survivors who left accounts of their ordeal reported how 10 people shared daily rations of two cups of rice and dogs were eaten. Some dug through garbage to find anything that might be edible. Golodoff's mother boiled orange peels she found on the street for her children.

Malnutrition and tuberculosis took their toll. Sick Attuans were taken to a nearby medical clinic but never returned. Golodoff's father died there. When Golodoff made his own trip back to Japan some years ago, the clinic was still standing. When Mason and her guides got to the spot this summer all they found was a parking lot.

The dolomite clay mine is also long gone. Today a tunnel runs through the hill where the Attuans dug clay.

Survivors spoke about how, after Japan's surrender, they were allowed to explore Otaru. Much to their surprise they found a Russian Orthodox church near the monastery where they had been confined.

The discovery was an emotional moment for the survivors, said George Kudrin. Kudrin is the husband of Nick Golodoff's younger sister, Elizabeth, who is one of two living Attu survivors along with her brother Gregory. The Attuans were all Orthodox, but they hadn't been able to go into a church since leaving America. The only token they'd been able to bring with them was a little icon smuggled out by Michael Hodikoff, chief of the village.

The church had been built in 1923 by Russian refugees who settled in Japan following the Bolshevik Revolution. The original was replaced in the 1970s, but the new Church of the Resurrection of the Lord is on the same spot.

[Related: 70 years ago, the Battle of Attu raged]

"The parishioners are all Japanese now," Mason said. "They showed us the old scrapbooks, so we could see what the church looked like when the Attu people found it."

"It's amazing that the church is right there in that community today," Kudrin said. "And it's so beautiful."

One of the survivors, the late Alex Prossouff, reported that Attuans attended services at the church. Kudrin, however, said elders he knew didn't mention worshipping at the church, "But they did mention meeting Russian people (in Japan). The church they remembered was the one in Tacoma, (Washington), when they got back to America."

Some of the Attuans, suffering from tuberculosis, were hospitalized in Tacoma. Younger people were sent to orphanages. Some joined the military. A few relocated to Atka, the closest Native settlement to Attu, and the place where Kudrin was born.

Too few survived to rebuild their village, a proposition the military would likely have vetoed, as the island was still an active base at the end of World War II and the landscape was – and perhaps still is – littered with unexploded munitions.

One non-Native teacher, Etta Jones, was also taken to Japan, but separately from the villagers. Her husband, Foster, was executed by the Japanese shortly after they occupied the village. She survived the war in the company of Australian nurses and missionary women captured in Japan's surge through the South Pacific.

Aleuts living in other villages were also forced to evacuate – by their own government. Many were held in run-down facilities in Southeast Alaska, segregated from the local communities. They too suffered from cold, poor food and inadequate medical treatment.

Elizabeth Kudrin doesn't speak much about the ordeal, Mason said. Her husband, who has a great interest in what happened to people on the neighboring island, often stands in for her at events commemorating the loss of the village.

"She was only a baby," George Kudrin said. "Her dad was alive all the way through the end of the war. But he passed away just before the end.

"She's thankful to her brother Nick for sharing the part of the experience he could remember. Nick really wanted to say something about it. I'm just grateful that Rachel was able to join up with him and put a book together. Otherwise no one would ever know that there was a village in Attu," he added.

Elizabeth is now 75, and her older brother Gregory are the last Attu survivors. "Otherwise, they're all gone now," George Kudrin said. "Everyone who heard about it or experienced it."

Mason is now in the process of preparing a report on her trip to Japan for the Aleutians Pribilof Islands Association. She'll give a preliminary talk at 5 p.m. on Monday at the UAA Campus Bookstore.

"It's hard for us to believe that all of that happened," Kudrin said. "We just have to wonder how people went through it all.

"My wife only prays that nothing like that will ever happen again."

"Revisiting Hokkaido, Where the Attuans Were Imprisoned During WWII," a talk by Rachel Mason, is set for  5-7 p.m. Monday at the UAA Campus Bookstore. There is free parking for this event in the South Lot, Sports Complex NW Lot, West Campus Central Lot, Sports Campus West Lot. The talk is free and open to the public.