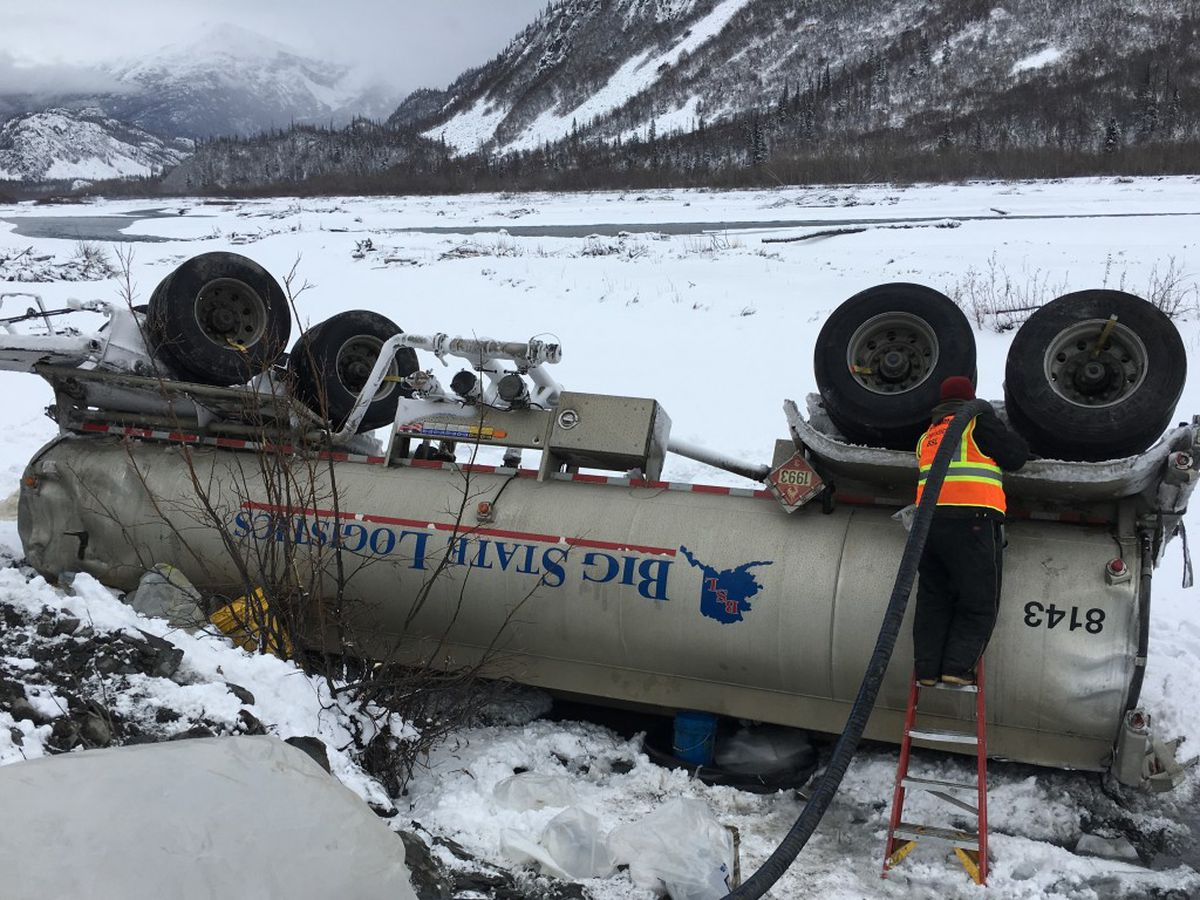 A Big State Logistics response crew offloads fuel from a damaged tanker at Mile 42 of the Richardson Highway on Friday. (Candice Bressler/Alaska Department of Environmental Conservation)

A Big State Logistics response crew offloads fuel from a damaged tanker at Mile 42 of the Richardson Highway on Friday. (Candice Bressler/Alaska Department of Environmental Conservation)

Alaska State Troopers said in a dispatch that the Big State Logistics semi, hauling a double load of diesel-filled tankers, was headed north just before noon Friday near Mile 42 of the highway. The driver, 59-year-old Fairbanks resident Dale Cropp, was unhurt in the crash.

"Cropp attempted to slow down to turn into a pullout to remove the chains from his truck tires but lost control of the vehicle, resulting in the rear cargo tank rolling over the embankment and onto its top into the (Tsaina) River," troopers wrote. "A cleanup crew responded to stop a small leak of diesel into the river."

A storm front Friday brought up to a foot of snow to Southcentral Alaska. National Weather Service meteorologists issued a blizzard warning for Thompson Pass, including up to 3 inches of snow and wind gusts up to 65 mph.

Candice Bressler, a spokeswoman with the state Department of Environmental Conservation, said in an email that the rear trailer lost traction and left the roadway due to "poor road conditions." Neither the semi nor the front trailer were damaged, but a small puncture allowed some of the 4,630 gallons of diesel in the overturned trailer to spill.

"The inactive channel of the Tsaina River was impacted by the release," Bressler wrote. "However, no oil had entered the flowing section of the river."

Big State Logistics workers recovered almost all of the fuel, including 4,260 gallons from the trailer and roughly 350 gallons of mixed water and fuel at the crash site.

No reports were made to DEC of wildlife affected by the spill, according to Bressler.