With focus on hurricanes, erosion-threatened Alaska villages wonder if they’ll get any help from Trump 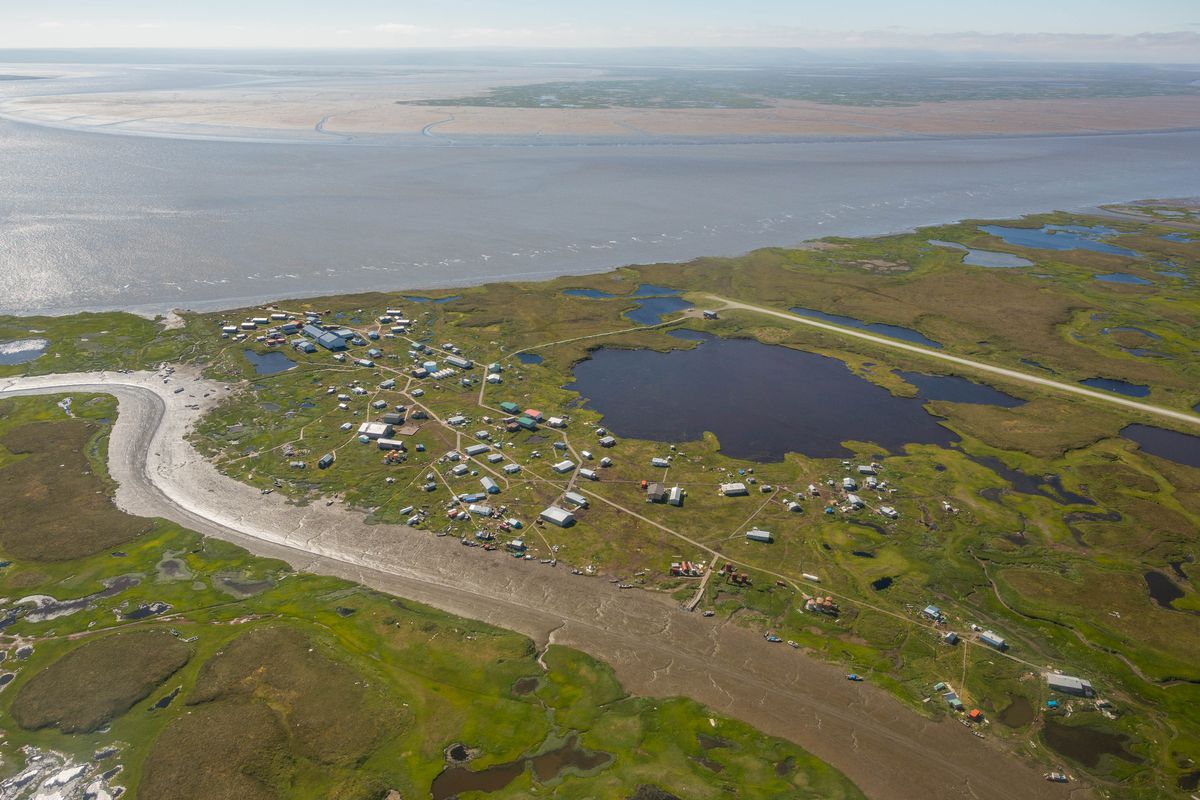 The village of Newtok, in Southwest Alaska, has lost 3 miles of shoreline to the Ninglick River over the past 60 years, and is in the process of moving to a new site on higher ground 9 miles away. (Loren Holmes / Alaska Dispatch News)

The village of Newtok, in Southwest Alaska, has lost 3 miles of shoreline to the Ninglick River over the past 60 years, and is in the process of moving to a new site on higher ground 9 miles away. (Loren Holmes / Alaska Dispatch News)

As the federal government has turned its attention to hurricane recovery in the Southeast and Puerto Rico, residents of coastal Alaska villages are also facing the threat of flooding and erosion from fierce fall storms, amplified by rising sea levels and thawing permafrost.

But the government hasn't provided the same assistance to endangered Alaska villages as it has to Texas and Florida. And now a federal whistleblower is claiming that the Trump administration has halted progress in Alaska.

Former President Barack Obama, a year before the end of his second term, flew over one of those villages and pledged that federal help was on the way. Residents were buoyed by the prospect of Obama being replaced by Hillary Clinton, who offered her own plans to combat global warming.

"She said it time and again, about climate change, the effects," said Romy Cadiente, the relocation coordinator for the Southwest Alaska village of Newtok, which is in the process of relocating to higher ground. The village voted 74-6 for Clinton over Donald Trump, according to election results.

"She had a position about all of this," Cadiente said.

The federal whistleblower, Joel Clement, was a senior official at the U.S. Department of the Interior once tasked with corralling the wide-ranging federal programs on which the villages depend.

But President Donald Trump's administration reassigned Clement to a job in an Interior Department office charged with collecting royalty payments from companies that produce fossil fuels from federal lands — ironically, an activity that helps drive the climate change that Clement had previously been helping Alaska villages fight.

Clement subsequently published an opinion piece in The Washington Post in July that accused the Trump administration of trying to force him out of the federal government. He resigned Wednesday.

Clement said in a phone interview with Alaska Dispatch News that the work he was doing in Washington, D.C., has come to a "full stop" under the new Interior secretary, Ryan Zinke.

"It's a matter of momentum, and the important thing was that finally, after too long, the momentum was building," Clement said. "This administration has halted that momentum and reversed progress."

But the bureaucrats and experts in Alaska working with erosion-threatened coastal communities like Newtok, Shishmaref, Kivalina and Shaktoolik said in interviews that they never expected that the federal government would deliver the hundreds of millions of dollars that could ultimately be needed to relocate those villages.

That kind of cash never materialized during Obama's presidency, even after he visited Alaska and campaigned against climate change in his final years in office. And the reality is that whether the federal government was led by Obama, Trump or Clinton, it was unlikely to ever devote enough money and capacity to relocate entire rural villages, said Davin Holen, a coastal resilience specialist and assistant professor at the University of Alaska Fairbanks.

"There just can't be the expectation that they're going to come in and move them — I mean, this isn't Soviet Russia," Holen said. "Ultimately, it's going to be up to the communities to move."

As advocates and experts like Holen ponder alternative sources of cash for village relocations, like Native corporations and philanthropists, they're also reporting something surprising: Lower-level federal agency employees are still cooperating with them — even under Trump, who's dismissed global warming as a hoax and promised to withdraw from the Paris climate accords.

"Every single thing I was working on before is still going on," said one of those advocates, Sally Russell Cox, a planner who works on relocation for the state of Alaska. She added: "I'm probably collaborating more with federal agency representatives than I ever have."

Several of Trump's initial moves after his election took aim at federal programs and initiatives that work on Alaska, Arctic and climate change issues.

Among them was his revocation of an Obama executive order establishing a North Bering Sea "Climate Resilience Area," which had created a tribal advisory council and placed certain offshore areas near Nome off-limits to oil drilling.

The budget also would have shuttered the Denali Commission, an independent federal agency and brainchild of the late U.S. Sen. Ted Stevens. Obama, during his 2015 visit to Alaska, had directed the commission to be the "one-stop shop" coordinating tribal and governmental response to climate change impacts like flooding, erosion and thawing permafrost.

But six months after Trump proposed to eliminate the commission, it's still running, and so is Sea Grant. Congress ultimately has the power to fund or cut federal programs, and current competing proposals from both the House and Senate would preserve most or all of the Denali Commission's cash.

The commission's head, Joel Neimeyer, said he sees the move to eliminate his agency as in line with White House proposals to eliminate three other regional commissions — aimed at saving money, not targeting the Denali Commission because of its specific task fighting climate change impacts.

In an interview at the commission's downtown Anchorage headquarters, along with four other top commission employees, Neimeyer handed a reporter a highlighted copy of a news story that described Trump's homeland security adviser, Tom Bossert, saying that the new administration takes climate change seriously — "not the cause of it, but the things we observe."

Those comments, Neimeyer said, suggest that there's potential to cooperate with Trump's appointees on village relocation and adapting to climate change impacts.

More than a 'little bit of attention'

Clement, the whistleblower, doesn't dispute that career employees at federal agencies are still functioning under the status quo.

The problem now, he said, is that unlike during Obama's second term, there's no one in Washington prodding the different federal agencies that coastal villages rely on for money to support relocation and climate change adaptation.

There's no dedicated stream of federal cash large enough to pay a village's full relocation costs, or their costs of protecting existing roads and buildings from climate impacts. Instead, they have to apply for individual grants from agencies like the Department of Housing and Urban Development, the Environmental Protection Agency and the Bureau of Indian Affairs.

"This is not the kind of issue where you can just pay a little bit of attention and see if you can redirect a million dollars," Clement said. "Federal agencies are not empowered to move resources until D.C. gets behind it."

One member of Alaska's congressional delegation, GOP U.S. Sen. Dan Sullivan, said in a prepared statement through a spokesman that he's pushing legislation to ease relocation for erosion-threatened villages, such as by speeding up federal permitting. But he also argued that the Obama administration never followed through on its own promises to assist remote Alaska villages.

Even after Obama's visit to the state, the Department of Housing and Urban Development chose to dedicate $48 million to relocate a Louisiana tribal community threatened by climate change, rather than one in Alaska. Obama's final budget proposal would have set aside some $400 million to address climate change impacts in Alaska communities, but the plan was a political non-starter because it would have diverted oil revenue away from Gulf Coast states.

"The grand announcements of the last administration were little more than empty promises that resulted in little or no worthwhile action," said the statement from Sullivan's spokesman, Mike Anderson. Sullivan, U.S. Sen. Lisa Murkowski and U.S. Rep. Don Young all refused or didn't respond to interview requests.

Some advocates suggest that the federal government does have a responsibility to help relocate erosion-threatened coastal villages because of its role in creating them. Many were originally established as the government pushed policies that required children to attend school, said Holen, the UAF professor.

The attorney for the Newtok Village Council, Mike Walleri of Fairbanks, argued that a major commitment of federal cash would be in line with Trump's refrain of "Pittsburgh, not Paris" earlier this year when he announced his intent to withdraw the United States from the Paris climate agreement.

That was Trump's way of saying that the federal government, under his leadership, would focus its attention on domestic problems rather than global ones, and cut off its payments of hundreds of millions of dollars into an international "Green Climate Fund." Walleri argued that cash should be spent instead on Alaska Native villages threatened by the effects of global warming.

"If the president meant what he said — that he wanted to put America first and Americans first — there's no better Americans than the first Americans," Walleri said. "In this case: Newtok, not Paris."

But in a brief interview last month, a top Interior Department official, Vincent DeVito, asserted that "Alaska and Alaska Natives have no better friend than Secretary Zinke."

DeVito was in Anchorage for a speech to a conference of ocean engineers, in which he touted the Trump administration's efforts to boost American production of energy, including oil and gas, from federal land.

In the interview, DeVito wouldn't identify specific federal efforts to directly support village relocation. But he did say that the Interior Department's plans to boost natural resource production would create new revenue to support other programs.

"Any increased revenue into the federal government from our strategies do have a benefit to address all environmental issues," said DeVito, Zinke's counselor for energy policy.

Other Alaskans working to relocate and protect coastal villages argued that it's not realistic to expect a big commitment of federal cash any time soon — or state cash, given Alaska's massive deficit — and say that it makes more sense to look to other sources.

Cox, the state planner, said she thinks philanthropic organizations could be the most promising source of money. Holen, the university professor, suggested that Alaska Native corporations could help fill gaps.

"Corporations are supposed to benefit their shareholders and I think some of the onus on moving some of the communities may have to go to them," he said. "It's going to have to be a team effort."

But even if villages come up with the money to pay for relocation and protection, Alaska environmental advocates point out that the need for cash will only increase — and the problem spread to more villages — without a more aggressive plan to fight climate change from the Trump administration.

The administration's refusal to acknowledge the link between global warming and the burning of fossil fuels, in spite of a broad scientific consensus, is "spectacularly irresponsible," said Rick Steiner, a biologist and former University of Alaska Anchorage professor who's pushed for a stronger state response to the problems posed by climate change.

For the Trump administration to acknowledge the impacts of climate change without addressing its cause, Steiner added, is like "trying to bail a sinking ship with a teaspoon."

"Adaptation is just going to buy you a little bit of time," he said.

Asked if he was concerned that the Trump administration's plans to boost the production of fossil fuels could worsen the climate change impacts that are threatening Alaska villages, DeVito, the Interior Department official, chuckled.

"We're all environmentalists. We're all conservationists," he said. "And those folks, including Native Alaskans, have no better friend in Ryan Zinke than anyone else. He's very much attuned to their concerns."