This Alaska teen’s biggest catch was a 57-foot whale. Animal-rights activists didn’t like it. He’s not backing down. 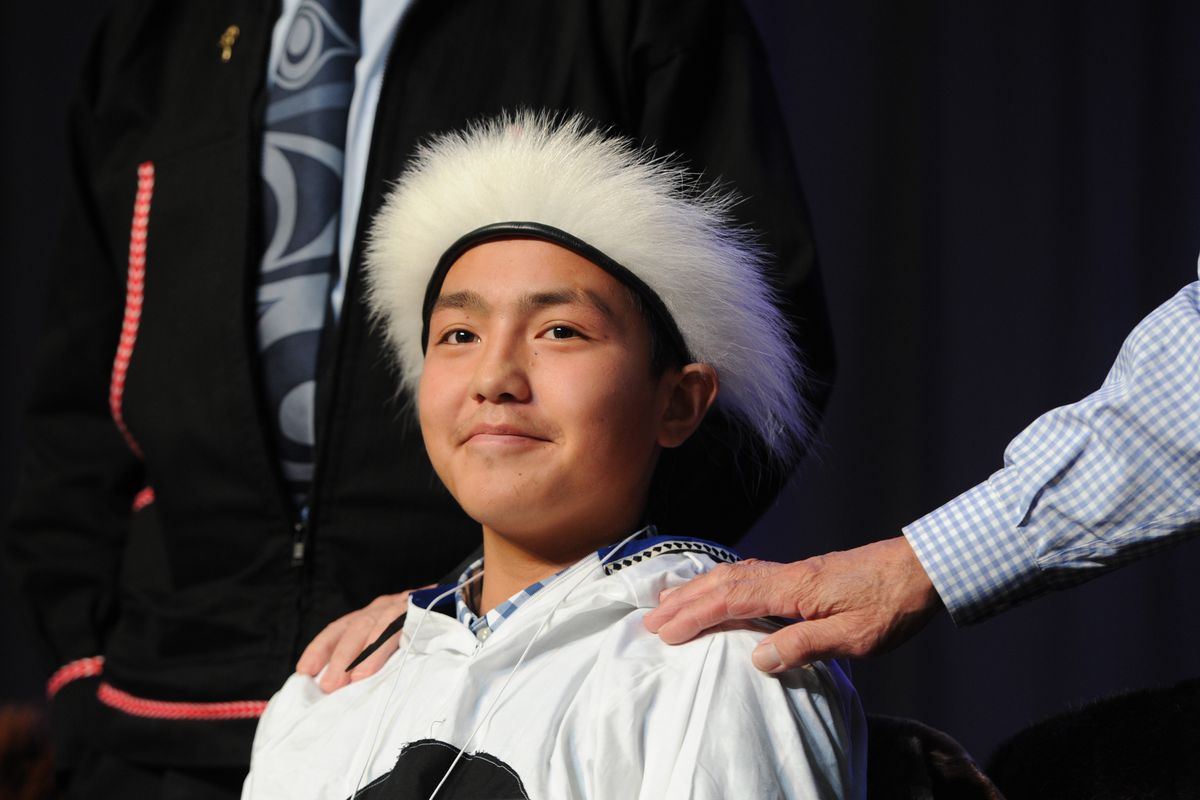 He sat on stage, the governor on one side, the lieutenant governor on the other, his parents at the end, and he told a story bigger than the conference room, a story of a life on the wild lands and in the rough seas.

Chris Apassingok of Gambell on Monday told how he helped catch a massive bowhead whale in April when he was 16, and how radical animal-rights activists went after him and his family. The whale changed their world. But the critics won't change how he lives, he told the First Alaskans Institute Elders and Youth Conference, a precursor to the upcoming Alaska Federation of Natives convention.

"Agragiighuunga," he said at the start of his conference keynote speech, speaking in St. Lawrence Island Yupik, then in English. He started with his Yupik name. "I am Agragiiq. Chris Apassingok."

He told how he started hunting seals at age 7, where his favorite nengki or seal blind is, how climate change is affecting hunts in the Bering Sea.

He wore a ceremonial hat of polar bear fur and seal that an auntie gave him and a new qaspeq with an appliqued bowhead that his mother special-ordered from a seamstress in Nome. As he read his speech, elders, youths and chaperones at the Dena'ina Civic and Convention Center interrupted with applause time and again.

Apassingok is 17 now, a high school junior in Gambell.

"The great land and ocean provide us with whales, walrus, a few kinds of seals, all kinds of birds, reindeer that has been on our island for over 100 years," Apassingok said. He spoke of greens and roots, berries and wash-ashore seafoods, small invertebrates they call tepaq.

He started going out with hunters when he was just 3.

When he was very small, the men hunted whales from boats made of walrus skin and outfitted with sails.

In the quiet of a Bering Sea sailboat, hunters could sneak up on bowheads.
"We used to easily catch whales," he said. They never had to travel far, not more than 10 miles from shore.

Then the climate started to change. Ice moved away from shore. A layer of thin ice would form over open water leads, damaging skin boats. And when the ice moved all the way out, seas were too rough for sailing. The last time men went whaling in skin boats was seven and a half years ago, he said.

"There is no more thick ice that comes around," he said, no more shore ice called tuvaq.

Now hunters go out in aluminum boats with noisy high-powered motors. Men must go far to find whales and walruses too. This spring, walrus hunters boated in their 18-foot open skiffs 134 miles from Gambell.

"It is becoming windier. There aren't as much calm days anymore. Storms are becoming more intense," he said. "I am hoping things will be better."

In his village, children practice hunting with mice and small birds, then move up to squirrels and shorebirds and on up until they are able to hunt the biggest animals, polar bears, or nanuq, and bowhead, or aghveq. It's like being in preschool and eventually graduating high school. Five years ago, he got his first polar bear.

He's been in tight spots. That time the clamps came off the boat motor, and his uncle held onto it by the steering shaft. That time the boat motor failed in the middle of hundreds of walruses and an uncle arrived with a backup. That time the motor scraped rocks on the bottom and he and his cousin had to camp out for two nights until search and rescue brought a motor from Savoonga.

His elders taught him that hardships happen, and never to be discouraged.
On April 17, he was with his father boating. They got a bearded seal and were butchering it when someone spotted a spouting bowhead.

"Not long after the chase, I struck the whale," said Apassingok, who has been a striker throwing the bomb-rigged harpoon since age 15. That time his harpoon didn't stick — "it mekguut," the word for when a harpoon falls out. Another young whaler harpooned the whale. And in five minutes, he said, the whale was finished.

It took two hours to tow it to shore, four days to butcher it. The animal was massive, 57 feet, 11 inches, he said. Some said it could have been 200 years old.
An anti-whaling activist, Paul Watson, saw a story on the hunt and went after Apassingok on Facebook. Hundreds joined in, threatening Apassingok and sending him personal messages on Facebook.

"Barely any of them were kind," he said.

Watson was well known on the island. He had splintered off from Greenpeace over his opposition to any whaling, even by Native people to feed themselves. He years earlier accused Gambell hunters of killing children after a deadly boating accident when a storm came up as a whale was being towed.

Watson took down his post. The harassment didn't end. Yet their people shouldn't be discouraged, Apassingok said.

"I am part land. I am part water. I am always Native," he told the crowd, echoing the conference theme.

Just about everyone stood up, clapping and cheering.

"Keep on whaling!" they shouted from the back of the room.

He left the stage with a certificate from Gov. Bill Walker and Lt. Gov. Byron Mallott.

It was in appreciation of "his skill and expertise in landing a bowhead and receiving the gift of the ancient whale's life to sustain his people."

With the recognition and support from state leaders and Native people, the hurt is being washed away, said his mother, Susan. She earlier cried over the harsh words but on Monday, she stayed calm.

"This brings a sense of healing to my heart," she said after his speech.

The story of the whale and the backlash got international attention, she said. Some don't seem to realize how expensive store food is on the island, and how little is available.

The teenager trained since he was a young child for that hunt, Mallott said, calling the speech powerful.

"It gave me the chills," said 16-year-old Jacquelyn Henry of Point Lay, an Arctic coast village where whaling is being revived. "It's not a thing you expect. You don't listen to a teenager tell the story of how they caught a whale."

A youth leader at the conference, Analouise Hoseth of Dillingham, said it was a story they all could relate to, because they share the values of the land.

Apassingok doesn't look at Facebook much anymore. He doesn't know what he wants to do later in life. He is sure he will stay on the island, as a hunter.