Stretch of road in Southwest Alaska village falls into the sea 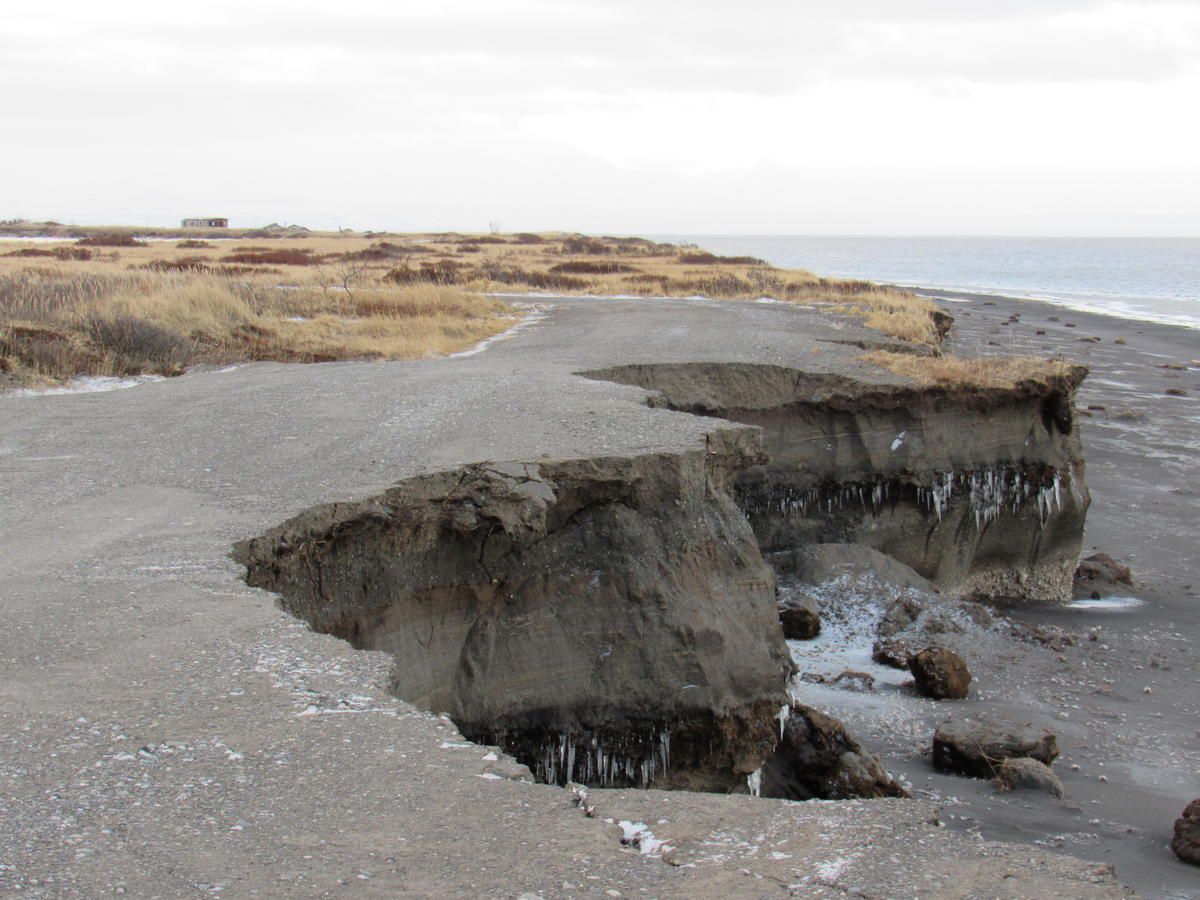 Port Heiden’s road to the safe harbor and old village was closed in November due to erosion. Photo taken Nov. 22, 2017. (Chasen Cunitz via KDLG)

Port Heiden’s road to the safe harbor and old village was closed in November due to erosion. Photo taken Nov. 22, 2017. (Chasen Cunitz via KDLG)

Port Heiden on the Alaska Peninsula is losing shoreline quickly. Wind and waves have pushed the coast inland by an average of about 30 feet this year. Areas along the road from Port Heiden to the safe harbor and old village site lost roughly 17 feet in November. At the end of the month, the village closed the road because it is no longer safe to drive.

A crucial section of that road winds along a 12-foot bluff above the beach. It is a crust of dry land hemmed in by the bluff edge on one side and Goldfish Lake on the other.

With the road crumbling onto the beach below, Goldfish Lake will soon breach. Water from the lake is already steadily seeping through the bluff.

Anderson said it is not clear how precisely how the landscape will look when the lake does breach, but he is willing to speculate.

"I figure once it breaks through, the water that runs into the lake from the watershed is going to make a large river. And it's going to drain out," Anderson said.

Losing the road means losing access to the safe harbor, a protected lagoon down the road where village residents keep and launch skiffs in the summer and fall. Instead, they will have to launch their boats into the bay closer to the village.

"It's not really a good area to launch boats at all," said Anderson. "Trying to offload our boats on the bay side here with no protection, with no harbor, it's pretty rough on the boats. Every year we have some kind of an incident where we're spending thousands of dollars to repair our boats. So it's significant for us."

Anderson hopes that once the lake breaches, the village will be able to turn it into a safe harbor. Whether or not that is feasible depends on how the landscape and watershed interact.

The other problem the crumbling road creates is that no one can drive to the old village site. The site was abandoned due to encroaching erosion by 2008. The village has cleaned up many of the old buildings in order to keep them from becoming debris in the ocean and on beaches. Port Heiden hopes to re-establish access to the village site from the beach once the Goldfish Lake breaches so that it can finish removing the few remaining buildings.

Anderson anticipates that the lake will breach this winter based on the recent rate of erosion.

This story was republished with permission from KDLG.