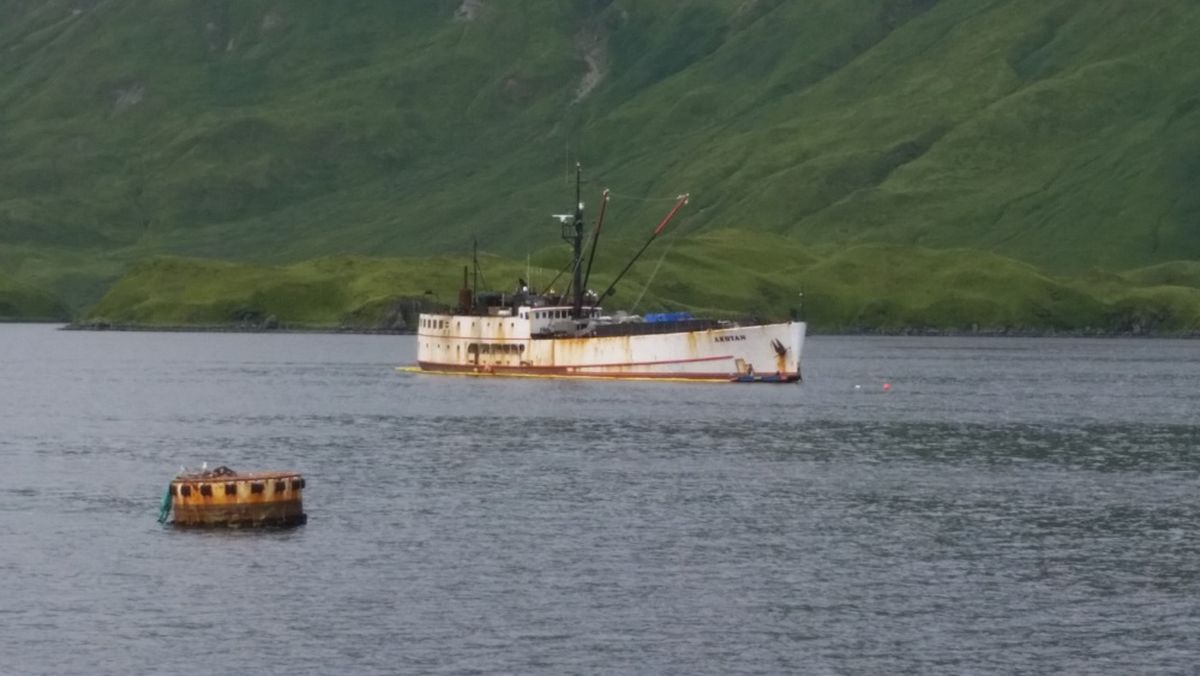 The derelict bankrupt salmon processing vessel Akutan was blown up and dropped to the bottom of the Bering Sea last week. The vessel was sunk 25 nautical miles north-northwest of Dutch Harbor on Jan. 26.

The Akutan was towed to a watery grave by the Coast Guard Cutter Alex Haley, and sunk with explosives, but no machine guns or other weapons, said U.S. Coast Guard Lt. Brian Dykens in Juneau.

On Jan. 10, the Coast Guard, in a move that pleased Unalaska city officials, declared the 74-year-old ship was an immediate threat to life, property and the environment of Captains Bay, where it was moored since August, following a disastrous sockeye salmon season in Bristol Bay's Nushagak Bay last summer.
District Commander Michael McAllister declared an emergency allowing the scuttling to proceed, according to Dykens.

Unalaska city officials had asked the Coast Guard to sink the 166-foot Akutan, with the help of $31,400 in city funds, in water at least 600 feet deep. Dykens said it was sunk 15 nautical miles from the neareast point of land. The money was approved at the Jan. 8 city council meeting despite some grumbling.

While the council didn't like the idea of spending any local funds, member Shari Coleman said it was a "pittance" to pay for the removal of a hazard to navigation and the environment. Another council member, Roger Rowland, said the state should pay everything.

The $31,400 is the estimated scuttling bargain price. That includes $15,000 to retrieve the mooring, $3,900 to tow the derelict either to the Resolve dock or a rendezvous with a Coast Guard cutter, $5,000 to rig the Akutan for towing, $5,000 for explosives, and $2,500 for the demolition team, according to Resolve Magone's rate sheet.

Later, the state Department of Natural Resources raised the estimated price to $36,000, pending the final bill, said DNR Regional Manager Clark Cox on Monday.
Without the emergency declaration, the cost of decontaminating the Akutan to normal standards could have cost over $200,000, according to the city.

The state Department of Natural Resources asserted authority over the wreck last month, and set a minimum price for the vessel of $300,000, plus a $1 million bond, she said. The reason that serious money and not a token payment is required, Unalaska Port Director Peggy McLaughlin said, is that the $1 purchase prices formerly charged resulted in derelicts towed from port to port, causing the same problems but in different locations.

Cox said no formal offers were made, though the department did receive inquiries from two "tire kickers," lacking the required resources for buying the Akutan. Plenty of people, he said, will pay a dollar for a boat, even if they can't afford to maintain it.

In a Jan. 8 notice setting minimum bid requirements, DNR said a new owner could assume the financial liabilities of the bankrupt vessel. Those include unpaid crew wages of between $144,000 and $148,000; the unpaid wages of the navigational crew and cook of $65,000 to $80,000; and a mortgage of $1.7 million held by Alaska Growth Capital Bidco.

The vessel was intended to provide an alternative market for a group of 15 Bristol Bay salmon gillnet boat fishermen last summer, Russian Old Believers from the Homer area. They formed their own company, Bristol Bay Seafoods LLC, and hired Akutan owner Larry Lang's company, Klawock Oceanside, to process and freeze their fish. But plans soon went awry. Mechanical failures plagued the boat. The Akutan didn't arrive in Nushagak Bay until the salmon run was nearly over. The crew went unpaid, although the mortgage holder, a subsidiary of the Arctic Slope Regional Corporation, bought them tickets home and gave them $500 each as they passed through Anchorage.

The decision to sink the ship was opposed, by email to this newspaper, by someone identified as lang.mary, saying a sale would save Unalaska money. The email came with a forwarded exchange between DNR's Cox, and Seattle vessel broker R. Isaak Hurst, of the International Maritime Group LLC.

Hurst said he had potential buyer, but was only interested as long as the liens were removed, allowing the sale of the vessel, minus any responsibility for unpaid wages and other bills.

"I do have a serious buyer for the Akutan. However, the purchase of the vessel would need to occur via a judicial foreclosure in order to eliminate all the existing debts and liens on the vessel. With that, can you inquire about the possibility of going down the judicial foreclosure road with the vessel? Honestly, I think the state of Alaska would likely get more money from the Akutan if there was no debts associated with the vessel," Hurst said.

"I did forward your email on for consideration regarding a potential purchaser of the vessel," Cox replied. "We have decided that we are not willing to consider any offers at this time. The state of Alaska is taking action under AS 30.30 which does not have a lien stripping mechanism. Given the emergency nature of the situation, the state is not willing to go through a judicial process and instead needs to act quickly to dispose of the Akutan before the situation gets any worse."
When the Akutan arrived in Unalaska/Dutch Harbor in August, problems continued. The vessel dragged anchor and nearly grounded in October. It was then resecured with an additional anchor. Overall, Unalaskans are relieved to see it gone.

Jim Paulin can be reached at jpaulin@reportalaska.com