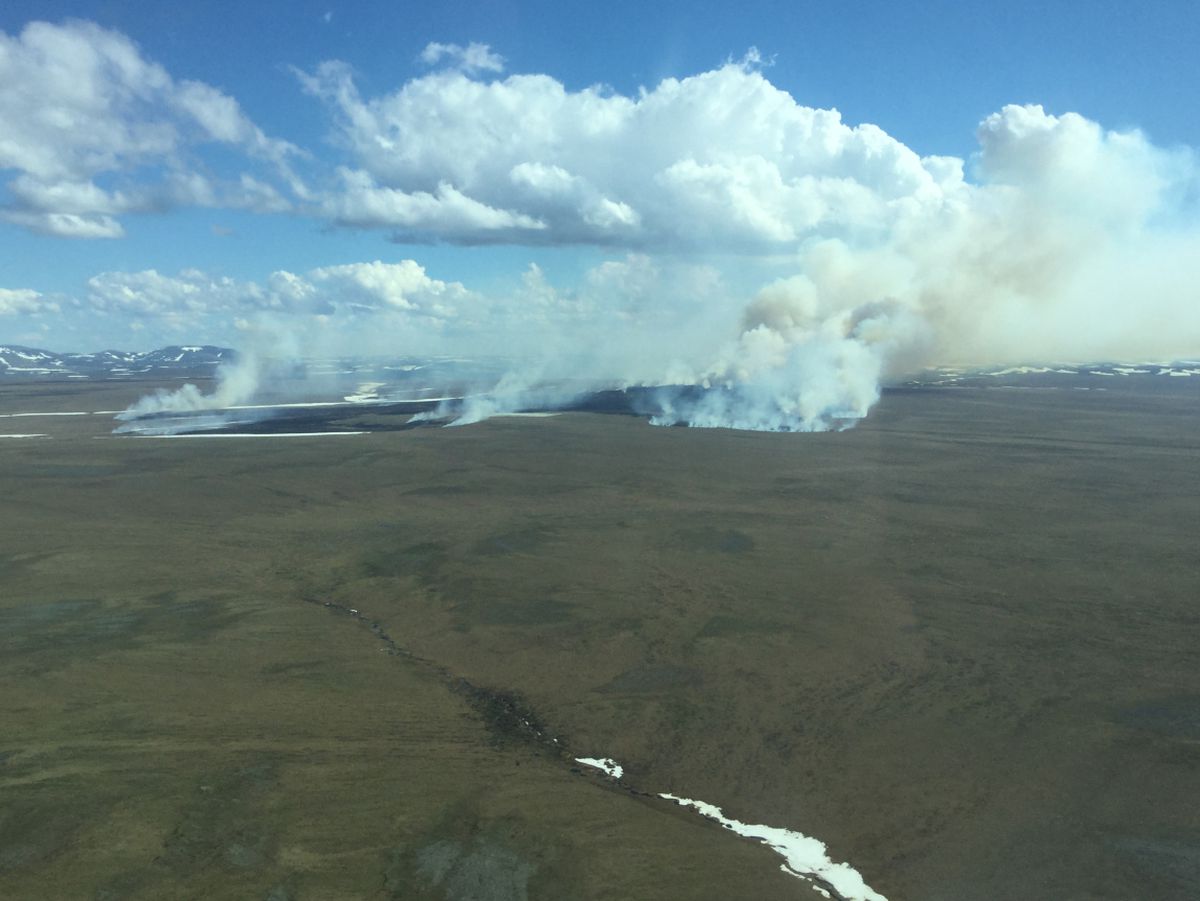 The Tusikpak Lake Fire was burning through tundra grass about 16 miles east of Point Hope on Monday, June 4, 2018. It was estimated at 2,000 acres as of Monday afternoon. (Photo by Ryan McPherson / BLM Alaska Fire Service)

The Tusikpak Lake Fire was burning through tundra grass about 16 miles east of Point Hope on Monday, June 4, 2018. It was estimated at 2,000 acres as of Monday afternoon. (Photo by Ryan McPherson / BLM Alaska Fire Service)

All of a sudden, it's fire season across Alaska.

Several larger wildland blazes getting attention from fire crews are among two dozen new starts reported Monday and early Tuesday after thousands of lightning strikes rolled through the state in recent days.

A tundra fire near Point Hope was estimated at roughly 2,000 acres as wind fanned flames in dry grass where green-up has yet to arrive, Alaska fire officials said.

Another, smaller fire near Talkeetna was estimated at just under 35 acres after a lightning storm swept through.

A total of 33 fires were burning around the state as of Tuesday afternoon.

Eleven of the new fires fall within a Montana-sized area of northern Alaska from Pilot Station to the Arctic Slope that's managed by the Bureau of Land Management Alaska Fire Service.

The largest, the Tusikpak Lake Fire in Northwest Alaska, was burning in the area of seven cabins on the Kukpuk River and numerous individually held Alaska Native Claims Settlement Act allotments, according to a Tuesday afternoon update. The fire was about 2 miles from the closest allotment.

The brown grass was countered by fingers of snow that remained between the fire and the cabins, BLM spokeswoman Beth Ipsen said.

Eight smokejumpers arrived at the fire scene late Monday and worked to bring it under control Tuesday.

Other northern fires included one about 20 miles southwest of Hughes estimated at 160 acres as of Tuesday morning, and a smaller fire near Mile 142 of the Steese Highway.

About 50 firefighters are working the Prairie Fire, about 40 miles northeast of Talkeetna and east of Prairie Creek, according to an update Tuesday. Tankers dropped four loads of retardant in the fire Monday evening.

The fire was is roughly 3 miles south of Stephan Lake. A nearby hunting lodge and cabins weren't immediately threatened.

The 116-acre Livingston Fire 15 miles southwest of Fairbanks was 65 percent contained as of Tuesday afternoon and expected to be fully contained by night's end, the update said. Two water-scoopers dropped approximately 18,000 gallons of water Monday.

The four Southwest Alaska fires spotted Tuesday were all lightning starts and include the Molybdenum Mountain fire, estimated at 50 acres, Saarloos said. A load of smoke jumpers deployed there to "get a closer look" and assess firefighting needs.

Breezy conditions in the Interior make it more likely that lightning starts could flare up, Ipsen said.

"Because it's dry and sunny in the northern half of the state, we're expecting things to crop up," she said.

Saarloos counted about 1,000 new lightning strikes Tuesday as of midafternoon, with storms going into early evening.

Another round of new starts was expected later Tuesday.

As of Tuesday morning, Alaska has had 118 fires that burned 3,150 acres, according to the BLM Alaska Fire Service. Of those, 93 are determined to be human caused. Two are still unknown with the rest either naturally or lightning caused.