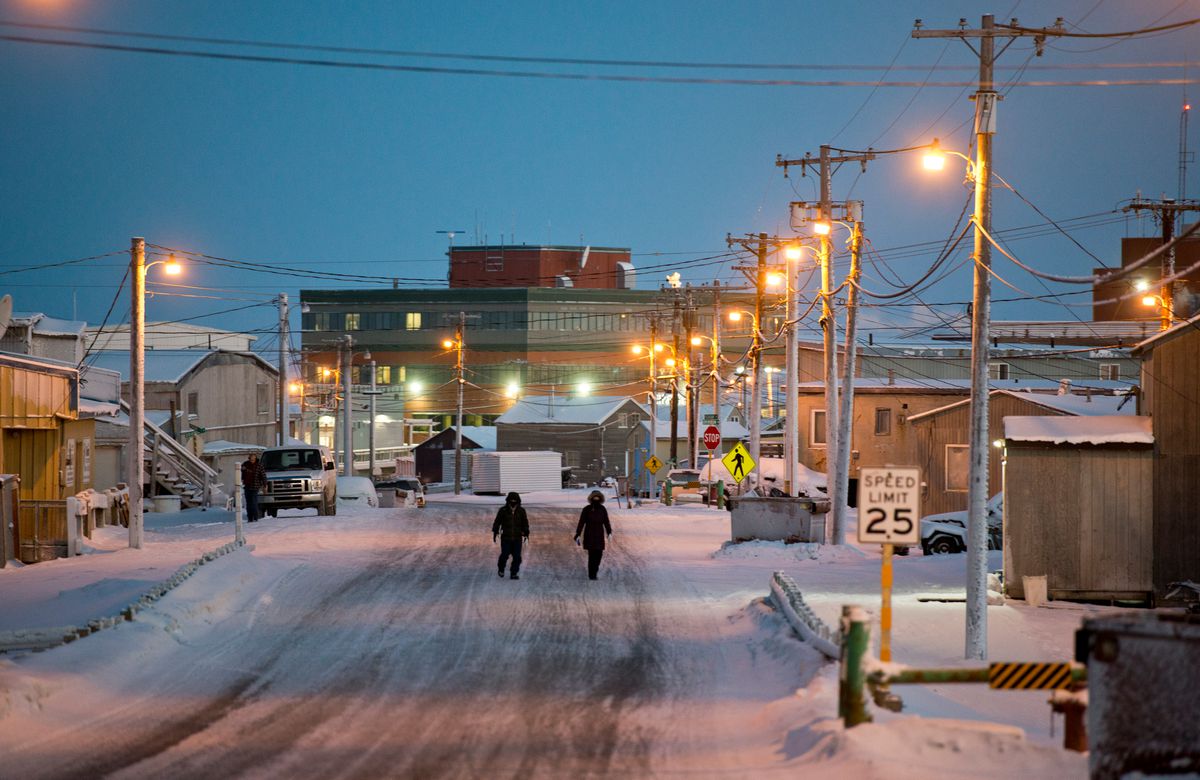 A federal grant program aimed at helping North Slope communities offset the impacts of oil development is about to become flush with money.

Written into federal statute, the money it disperses is the State of Alaska's 50 percent share of oil royalties, drilling lease rentals and bonus bids from the reserve; the North Slope communities of Anaktuvuk Pass, Atqasuk, Nuiqsut, Wainwright and Utqiagvik as well as the North Slope Borough are eligible for it.

While based on higher-than-current oil prices, the GMT-1 project, expected to peak at roughly 30,000 barrels per day, was estimated to generate more than $1 billion in royalty revenue over its life in the project's final environmental impact statement; half of that would go to the mitigation grant program. The federal royalty in the reserve is 16.67 percent of the wellhead value of the oil.

Arctic Slope Regional Corp. also holds subsurface rights to a majority of the oil-bearing leases, but the project is the first of three progressively larger oil developments ConocoPhillips is working on.

About eight miles farther into the reserve from GMT-1, Greater Mooses Tooth-2 — largely expected to be sanctioned by the company this winter — is expected to peak at upwards of 38,000 barrels per day. ConocoPhillips Alaska officials have said it could produce oil in 2021 if it's greenlit soon.

Department of Natural Resources Commissioner Andy Mack said the largest influx of grant revenue would come from the $4 billion to $6 billion Willow project, not only because it is pegged to peak at upwards of 100,000 barrels per day but also because the Bureau of Land Management controls the mineral rights there.

The North Slope Borough is projecting there will be about $17 million available to fund grants in fiscal year 2019, according to NSB Deputy Finance Director Fadil Limani. He said that's a purposefully conservative estimate that does not include production from GMT-1 or the annual fall NPR-A lease sale.

Revenue generated from the lease sales is generally unpredictable. BLM netted $18 million in the December 2016 NPR-A sale but that fell to just $1.1 million — all from ConocoPhillips — last year despite the agency opening all available tracts to leasing and strong indications that there is a lot more oil in the reserve than previously thought.

ConocoPhillips discovered the Willow prospect, which is largely a Nanushuk oil play, at a time when the most current U.S. Geological Survey mean estimate for recoverable oil in the reserve was less than 900 million barrels.

"Now we're suddenly looking at another area that has billions of barrels of oil," Mack said in an interview.

The USGS subsequently updated its mean NPR-A oil projection to more than 8.8 billion barrels for the reserve and adjacent state lands late last December. If remotely accurate, most of that oil is expected to come from the geologically related Nanushuk and Torok formations that are driving what ConocoPhillips Alaska leaders are calling a "renaissance" on the Slope.

BLM allocates funding for the grant program to the state twice per year. That money is then appropriated by the Legislature to the communities, which submit grant proposals to the state Department of Commerce Community and Economic Development.

The amount of money available for the grants has varied widely since 2002 mostly due to lease sale results. It peaked at $25 million in 2004 when 30 projects were funded; however, most years it has been in the $2 million to $5 million range.

Commerce Commissioner Mike Navarre said during a joint House and Senate Resources committee meeting in September that $13.5 million had been deposited in the state's account for the program so far in fiscal year 2019.

An annual report to the Legislature on the grant program issued in January listed 16 applications totaling $11.6 million for the current fiscal year 2019, but Navarre said his department could make a mid-year supplemental budget request if more money is available than first thought and more proposals are submitted.

"It's fairly broad funding in order to make sure that the communities that are affected (by development in the NPR-A) — their concerns and the impacts are addressed," he told legislators.

The current year projects recommended for funding are for community and youth center upgrades in several of the villages, a new John Deere loader tractor for Utqiagvik and a youth program in Wainwright, among others. The borough requested funds for fish, wildlife, water and air quality studies as well as $3.5 million for a winter trail network.

Any additional money not consumed by the grants is split between state uses with 25 percent of what's left going to the Permanent Fund, 5 percent to the Public School Trust Fund and the remainder going to rural power programs, and, lastly the General Fund for public infrastructure appropriations, according to the Commerce Department report.

According to department officials, to date no funds have been left over for state purposes in the history of the program.

Whether or not that trend will continue to hold true when more money is available is unknown.

North Slope officials are also aware of the fact there is rarely enough money to go around statewide.

"There's going to be other municipalities, other regions, legislatures in the state that are certainly going to want to see opportunities for these resources but, as expressed in the federal statute, the intent of these resources is to be reserved for the impacted communities these (oil) resources are being extracted from," Limani said, adding the North Slope Borough "absolutely" expects to use all of the money available for the program.

The borough's longer term projections are for $40 million to $50 million per year to be available for grants, noting that the estimates could well be "on the lower end of the spectrum" if Willow comes online as expected in the mid-2020s, he said. The borough has yet to closely examine the large but early-stage project.

Regardless of exactly how much money is available in a given year, the North Slope Borough and the eligible communities within it will reliably find uses for it, according to Limani. He emphasized borough Mayor Harry Brower Jr.'s focus on community assistance and development, highlighting the fact that unemployment rates in the villages can be close to 40 percent in some cases.

The borough usually has a capital budget of about $80 million per year but gets somewhere in the neighborhood of $400 million worth of project requests from its communities, according to Limani.

"A lot of the infrastructure out there is dilapidated, it's aged, so (Brower) wants to make resources available for that. While we focus on development of oil and gas resources, it does have impacts on the social side, too," Limani said. "I think that's another area he wanted to use resources to make sure that we're monitoring — knowing the drug and alcohol epidemic that's facing the state as a whole and especially the North Slope communities.

"The mayor's very sensitive to that; wants to deploy resources to be able to address that."

Longer term, borough officials are likely to look at transportation infrastructure, namely road development, which Gov. Bill Walker supports, and possibly getting natural gas from NPR-A oil developments to nearby communities as well as dealing with the impact of climate change.

Limani said money should eventually be made available to deal with coastal erosion in communities that might not be directly eligible for the grants but are within the borough boundaries.

And none of that addresses the omnipresent concern about the ability for residents to continue traditional harvests amid oil projects.

"Subsistence is the pillar of the culture, so when you're looking at all this one of the key components is make sure the development doesn't impact the subsistence way of living," he said.

As a result, the state would be eligible for 27 percent of royalties derived from Liberty, but the borough cannot levy its property tax on the offshore infrastructure as it does for other onshore developments.

"They're a little uncomfortable because (Liberty) is placed outside their jurisdiction and even though the state gets 27 percent of the rents, royalties and bonus bids, the borough doesn't enjoy some of the property tax that it is accustomed to and in many cases is used to mitigate impacts," Mack said.

Borough and state officials have started having high-level conversations about the grant funds given the newfound abundance of oil in the NPR-A, according to Mack.

"We have to grapple with the issue that there is a bundle of great news and along with that great news comes great expectations and also at some point we have to talk about money. And right now, with respect to royalty in the NPR-A, the state is not a recipient of a significant amount of that. So at some level we're hoping that we can work with the North Slope Borough," he said.

The state can levy its oil production tax on NPR-A projects, but that tax revenue will likely be relatively minimal for years given the multi-layered deductions companies are able to apply to new projects.

Mack stressed that Walker and Lt. Gov. Byron Mallott both grew up in small Alaska communities and thus understand the realities and challenges of living outside the state's urban centers.

"We want a program that is sustainable, that allows for the communities to mitigate impacts and adapt to the change but honestly, we want a fair shake just like everybody else does," he said, adding there is ample time to find an amenable solution.

"We're not demanding anything; we're all similarly situated."

Resources Committee chair Sen. Cathy Giessel, R-Anchorage, noted during the September hearing that Rep. Don Young has a proposal in Congress to split Arctic National Wildlife Refuge oil and gas revenue 50-50 between the state and the feds, with 3 percent of the state's share then going to Alaska Native corporations. She speculated whether or not some sort of similar plan could work for the NPR-A.

In an interview, Giessel said more available money will always lead to more competing uses for it, adding any changes to how the NPR-A funds are distributed "would be up to Congress to thread that needle."

However, she also contended that resource development, at its core, is about improving people's lives, which the NPR-A Impact Mitigation Grant Program is intended to do.

"I just want to make sure it all balances out," Giessel said.