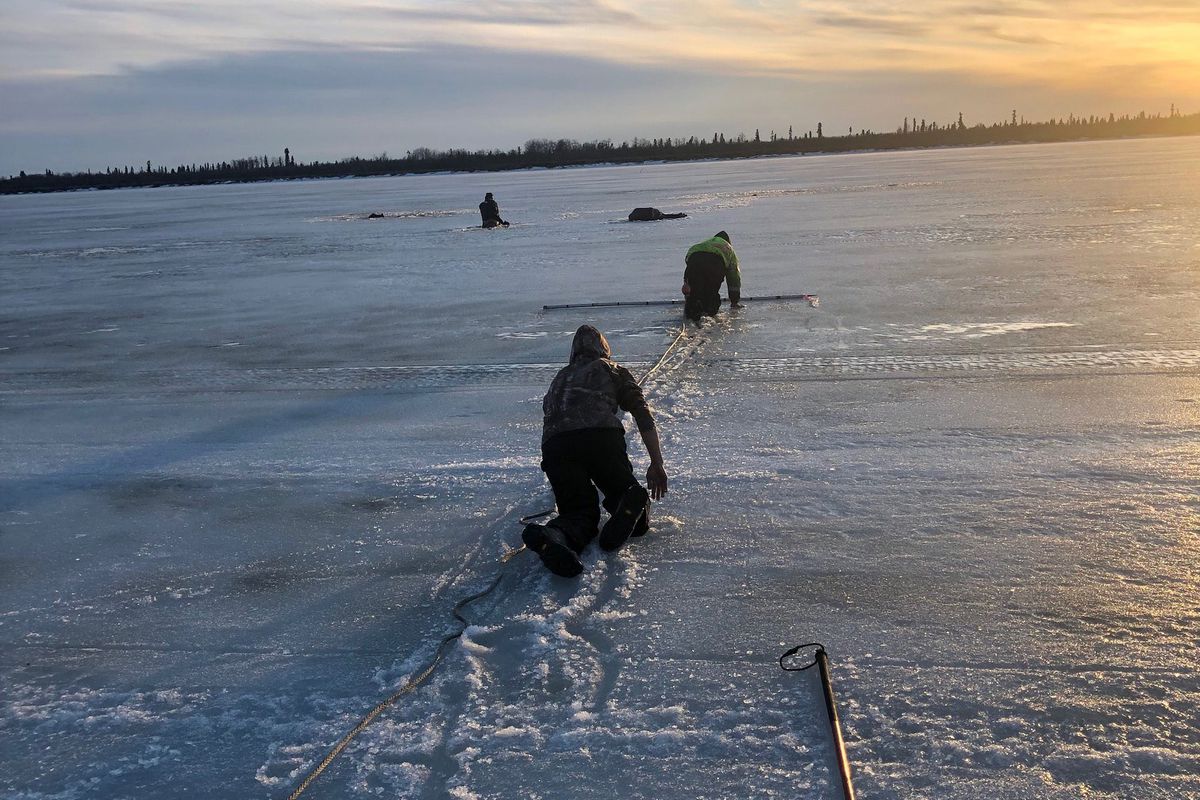 Two men died and three others were rescued after two four-wheelers fell through the rapidly deteriorating ice of the Kuskokwim River on Sunday evening.

Alaska State Troopers got a report Sunday night that the four-wheelers, with five people on them, fell through the ice on the river near the upper end of Church Slough, according to a dispatch posted late Sunday. Another traveler saw the men go into the water and reported it at 7:30 p.m.

Troopers identified the two dead as 47-year-old Nelson C. Jackson and 59-year-old Ernest N. Demantle, both of Akiak. The survivors were identified as Reuben D. Charles, 43, of Akiak; Lawrence A. Charles, 32, of Akiak; and Raymond Lee, 55, of Bethel. They were treated for hypothermia at the Bethel hospital.

The tragedy came after several days of dire warnings about the dangers of river travel due to an unusually early warm-up. Search and rescuers crawled onto weak ice, open water all around, to help retrieve the survivors.

Bethel rescuers described arriving at the scene to find the four-wheelers underwater, one person dead under the water, someone unconscious and lying on the ice, and someone sitting on the ice, conscious, and holding the body of the second victim, who was still in the water. A fifth person managed to get out of the water and was found at a nearby fish camp.

The group earlier that day passed members of the Bethel Search and Rescue team on the ice as the team surveyed a moose that punched through and drowned, members said in an interview with Bethel radio station KYUK. They opted against trying to salvage the meat: The deep water and rotten ice made it too risky.

“I feel bad for those people. We tried to wave 'em off. They just ignored us and kept going," Bethel SAR member Earl Samuelson told KYUK in an interview that included two other team members Monday morning.

The four-wheelers went through at an area the group has been warning people about, Leary told KYUK.

Members of the team were out checking the ice when they got what he described as “our worst fears” realized.

A helicopter called for help wouldn’t be able to arrive for four hours because it was coming out of Anchorage, the team members said. So Leary and another team member, Charles Guest, crept onto the ice with a safety line that proved too short. One rescuer fell through the ice but was able to extract himself.

Another local with what team members called a “little miracle” hovercraft helped rescue the survivors.

The search group pulled the bodies out of the water and tied them off on high ground, covered. They prayed over them and then made the difficult decision to go, Leary told KYUK. “I’ve been thinking about them all night, you know, being left out there alone."

A troopers helicopter was en route from Anchorage on Monday afternoon to transport the bodies to Bethel, DeSpain said. The decision was made to wait until daylight due to lack of resources, darkness and thin ice. Search and Rescue members were waiting at the scene for the helicopter.

Alcohol was determined to be a factor in the incident, DeSpain said. He didn’t have additional information.

Authorities are urging the public to stay off the rivers in the area due to thin ice and warm weather.

Bethel SAR issued a travel advisory March 29 that called February the warmest in 95 years for the region and March on the way to a new record as well.

The report said ice thickness was only about half what it normally should be, and getting thinner daily. All ice drilled by a team checking conditions was soft. Ice on the east side of the Kuskokwim below the Y and across from the upper end of Church Slough was only 4 to 6 inches thick.

SAR members said the main Kuskokwim isn’t safe, and neither are other rivers, with ice conditions usually not seen until May.

They also said they have limited resources to dispatch for rescues and discouraged residents from using the rivers to travel for shopping even though it’s the first of the month.

“It was a small miracle we were able to do what we did yesterday. As the ice rots more and more, I don’t think we’d be able to pull that off again,” Guest said. “Please heed the warnings: It is really bad out there.”