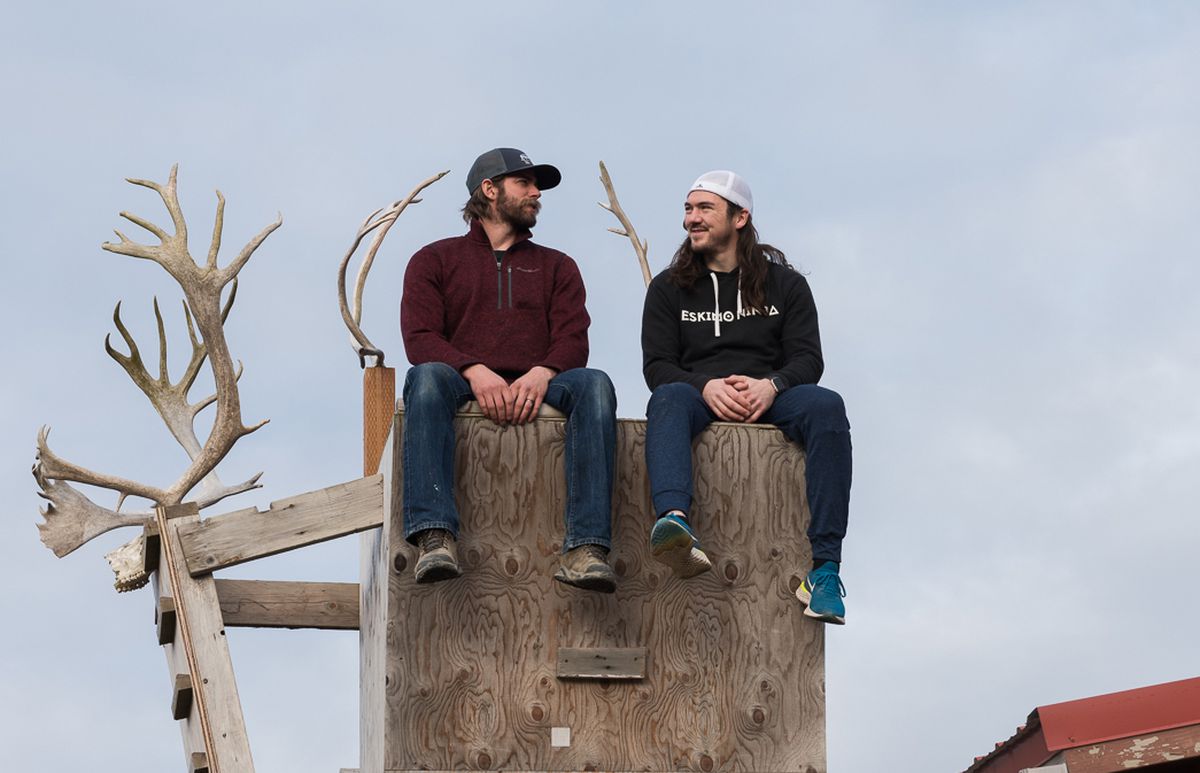 The television show “American Ninja Warrior” enters its 11th season next month, and again will feature the Eskimo Ninja, Nick Hanson from Unalakleet.

Hanson visited Bethel last week to hang out with his buddy, fellow show competitor Nate DeHaan. These two make up two-thirds of all the American Ninja Warriors to ever come from Alaska. KYUK sat down with the two ninjas to talk about how they became friends, and what it means for them to represent rural Alaska on the show.

“Here’s this guy from Unalakleet, Alaska, on the show,” DeHaan said. “And it was really cool to see someone from rural Alaska that made it there and did really well, and I thought, well, maybe I should give it a try.”

A few months later DeHaan happened to be visiting Unalakleet, and he remembered that Hanson lived there.

“I knew from Nick being on the show that he happened to have a warped wall on the beach in Unalakleet. … So when we get up there, and I was like, I gotta try this. I didn’t ask Nick’s permission. I don’t know if I ever told you that,” DeHaan admitted to Hanson.

A warped wall is just a wall with a slight curve. The goal is to run up it until you can grab the top and pull yourself up. In Unalakleet, DeHaan stood in front of Hanson's wall in his winter boots. He had to try it, and after a few falls, he made it.

“Standing on top of that warped wall, I thought, 'All right, I’m gonna go for it.'”

DeHaan applied to the show and got invited to season eight of “American Ninja Warrior.” He tracked down Hanson on social media to ask for tips. Instead, he got an invitation to train in Unalakleet with the person who had inspired him.

DeHaan lives a few hundred miles away in Bethel. Luckily, he’s a pilot.

Hanson remembered, “Nate actually flew his plane like, he was like, ‘Oh yeah, I can just borrow a plane from the place that I work.'”

The ninjas from the Bush trained together and competed in season eight of the show. They got along really well. When they both got invited back for the next season, they kept training together.

“As Nate kept flying up, like first year flew up, trained with me and left, and we filmed that, we actually got an Emmy for that by the way, on NBC. I don’t know if you knew that,” Hanson told DeHaan.

They didn’t quite win, but still, DeHaan and Hanson’s season was nominated for an Emmy. Since appearing on “American Ninja Warrior,” DeHaan has gotten a chance to do for others what Hanson did for him. He remembers an encounter while shopping in Bethel after his first season of the show aired.

“While I was checking out, I had someone say to me, ‘Hey, I saw you on the show. I was going through a pretty hard time right then, and it really gave me hope and it inspired me.’ And it was crazy to hear that,” DeHaan said.

Hanson knows the power that local heroes have, especially heroes who people can see themselves in. He says, “I am Alaska Native. I did grow up born and raised in an Alaskan village. I speak the Inupiaq language with my aaka and aapa (grandma and grandpa), and the kids from rural Alaska can all relate to me in a way that they might not be able to relate to a Steph Curry or a LeBron James.”

DeHaan told his friend, “It’s really special to see people be inspired by you. It’s about inspiring the people around you to be able to reach for their own goals and to do things they didn’t think were possible.”

Hanson will return for season 11 of “American Ninja Warrior,” premiering May 29. DeHaan injured his knee last year trying to dunk a basketball, but he still plans to pursue some form of obstacle course racing in the future.

You can’t keep a ninja down for long.

This story originally appeared on KYUK and is republished with permission.