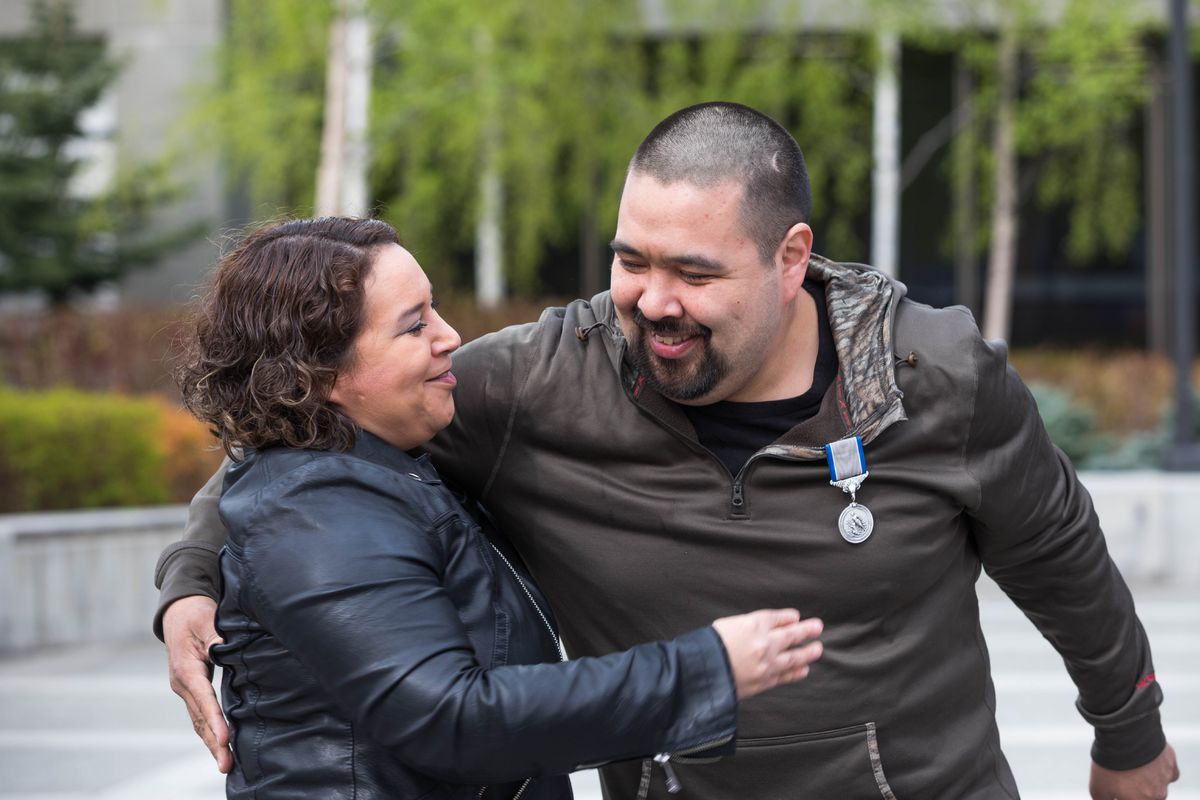 Nome Magistrate Judge Pamela Smith gets a hug from her friend George "Radar" Lambert after Lambert was given a Silver Lifesaving Medal on Saturday, May 18, 2019 at the Atwood Building courtyard. Lambert was awarded the medal by the U.S. Coast Guard for saving Smith from drowning in Kotzebue in 1998, when he was 10 and she was 12. (Loren Holmes / ADN)

Nome Magistrate Judge Pamela Smith gets a hug from her friend George "Radar" Lambert after Lambert was given a Silver Lifesaving Medal on Saturday, May 18, 2019 at the Atwood Building courtyard. Lambert was awarded the medal by the U.S. Coast Guard for saving Smith from drowning in Kotzebue in 1998, when he was 10 and she was 12. (Loren Holmes / ADN)

A Kotzebue man who saved his friend from drowning in a swift current when they were children was awarded a U.S. Coast Guard medal on Saturday more than 20 years after the incident.

George “Radar” Lambert, who works as a commercial fisherman, received a silver lifesaving medal — the second-highest honor a civilian can receive from the Coast Guard, according to Lt. Commander Jonathan Dale — for saving then-12-year-old Pamela Smith.

Lambert was 10 years old on June 22, 1998, when he, Smith and a group of their friends went swimming on a sandbar outside of Kotzebue, said Rear Admiral Matthew Bell, commander of the Coast Guard’s 17th District.

Bell told Lambert’s story at a small ceremony in Anchorage attended by Gov. Mike Dunleavy, who said he’s known Lambert and Smith since they were young.

Smith, Bell said, was wading in the water away from the sandbar when she slipped out past the drop off and was pulled out by the strong current. The water was about 40 degrees at the time, he said, and current pulled Smith down to the creek’s bottom, where she had to struggle her way to the surface.

Although Lambert was much smaller than Smith at the time and two years younger, he grabbed one of the life jackets the group had stored underneath an overturned boat and dove into the water, swimming about a hundred feet out to reach his friend.

He managed to grab Smith by the head and arms and towed her back to safety, fighting the current to reach the shore, Bell said.

“He pushed hard just to get to me and he pushed even harder to bring me back," Smith said. “We both could have not made it, because it was hard just going back. That’s when I couldn’t fight anymore, but he fought for both of us.”

The soft-spoken Lambert didn’t address the crowd at his own ceremony, but said he didn’t give much thought to his actions at the time.

“It just happened so quickly that, you know, no time to think," Lambert said. “I just ran to the boat and grabbed a jacket, didn’t even think about it, put it on, jumped in that water, went and got my friend and made it back to shore. And we’re here to talk about it today.”

Smith, who is now a magistrate judge living in Nome, said the channel she nearly drowned in has taken the lives of several other people in her community. A few years ago, she said, she helped her father on a search and rescue on that same waterway.

“While we were in the boat, I was just praying and hoping we could find that person alive, but I couldn’t help but think if it wasn’t for Radar, that my dad would have been doing the same for me,” Smith said. “And if he let me go away with that current, that I probably never would have been found.”

The Coast Guard never formally recognized Lambert’s actions until Lt. Commander Dale learned about his story in 2016. Dale led a three-year charge to award Lambert a lifesaving medal, not only to recognize what he called “an amazing story about an amazing person,” but also to highlight the importance of life jackets.

Smith is the first documented child to be saved because of Alaska’s “Kids Don’t Float” program, which encourages life jacket use and swimming safety education for children. The life jacket Lambert used to reach his friend was taken from a loaner board supplied by the program, Bell said.

Since then, at least 30 more children have been rescued from near-drowning incidents because of the program, he said.