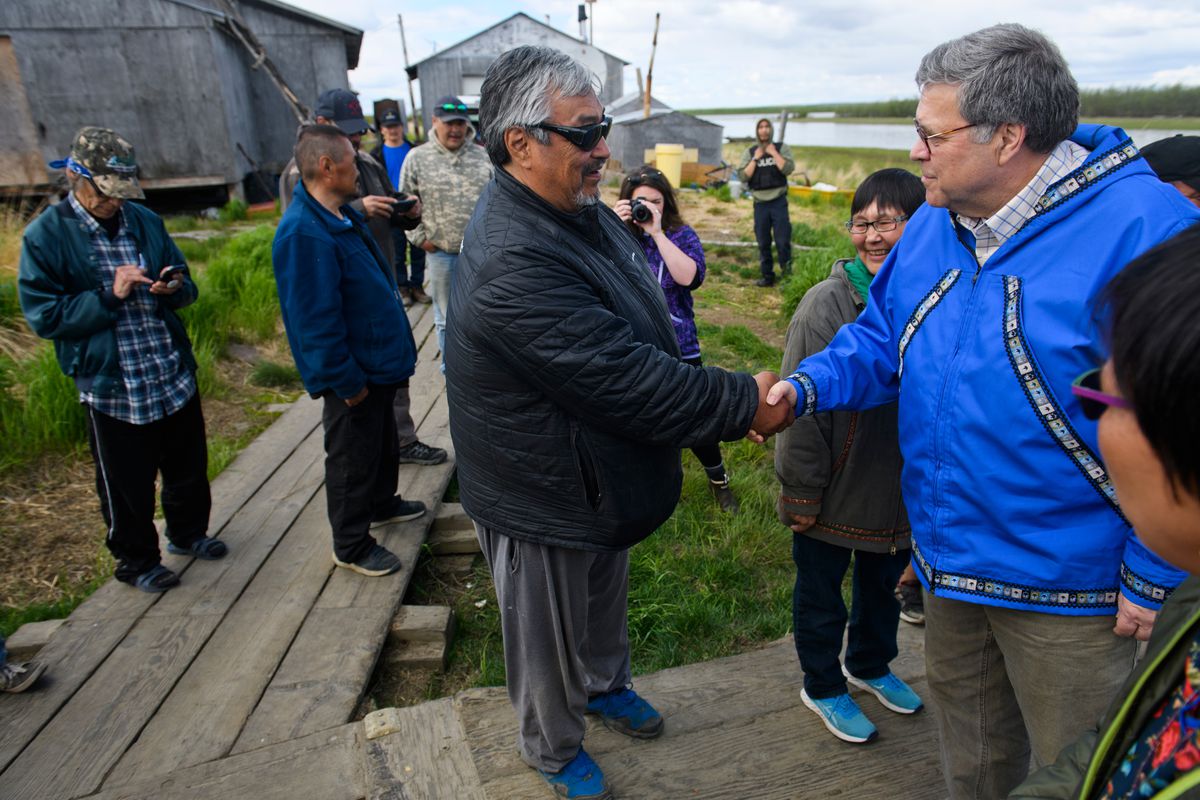 The award comes nearly two months after Attorney General William Barr met with tribal representatives who told him about slow emergency responses by authorities, violence against women and abuse of alcohol and drugs, including opioids, in remote communities. The money is for hiring additional village and tribal officers and to pay for equipment and training.

The grant funding couldn’t come at a more crucial time for Sharon Williams, the tribal administrator in the southwest Alaska village of Napaskiak, one of three communities Barr visited in May. The Yup’ik community of 450 is just 7 miles from the hub town of Bethel, whose voters lifted a decades long ban on alcohol sales in recent years.

Napaskiak and other villages ban alcohol, but Williams said the new supply of readily available booze purchased nearby is bringing more alcohol related problems to the village, including many intoxicated people boating on the Kuskokwim River. Since 2016, there have been 11 alcohol deaths in Napaskiak alone, including a 14-year-old boy who died of alcohol poisoning in February, Williams said. The community currently has four village and tribal police, but sometimes there are none because of sometimes high turnovers, she said.

“There’s more public safety needed because there’s so many intoxicated people,” she said in a phone interview. Williams said she gave Barr a tour of the community during his hours-long visit in May. He also visited Bethel and the rural community of Nenana.

“He was very attentive,” Williams said. “He was just soaking everything in.”

[Dozens of convicted criminals have been hired as cops in rural Alaska. Sometimes, they’re the only applicants.]

[One in three Alaska villages have no local police]

In June, Barr declared a law enforcement emergency in Alaska. The declaration cleared the way for the Justice Department to award more than $10 million to fight crime in rural Alaska communities. That includes the award announced Tuesday.

Julie Kitka, president of the Alaska Federation of Natives, praised the emergency declaration and the funding. She said her group has been talking with Justice Department officials, as well as Department of Interior representatives, to look for possible solutions.

"The attention to what needs to happen as far as women, the children, men that are living in all our rural communities has to be a priority," she said. "And we really appreciate the Department of Justice's attention to that."

During Barr's visit, tribal representatives told him communities with no police presence often must wait long stretches before state troopers can arrive to investigate crimes. Often, it can take troopers hours to reach a village given the sheer vastness of the nation's largest state, with few roads. That can stretch into days if the weather is bad.

They also spoke about the need to strengthen the authority of tribal courts serving Native communities.

Victims of domestic violence and sexual assault have limited services available in the larger rural hub communities, or none at all in the villages, participants said.

Barr’s visit and funding came as Congress and advocates have renewed a focus on violence against Native American and Alaska Native women. Federal statistics show they are victims of violence at astonishing rates. The most recent numbers show that more than half have faced sexual and domestic violence at some point in their lives.