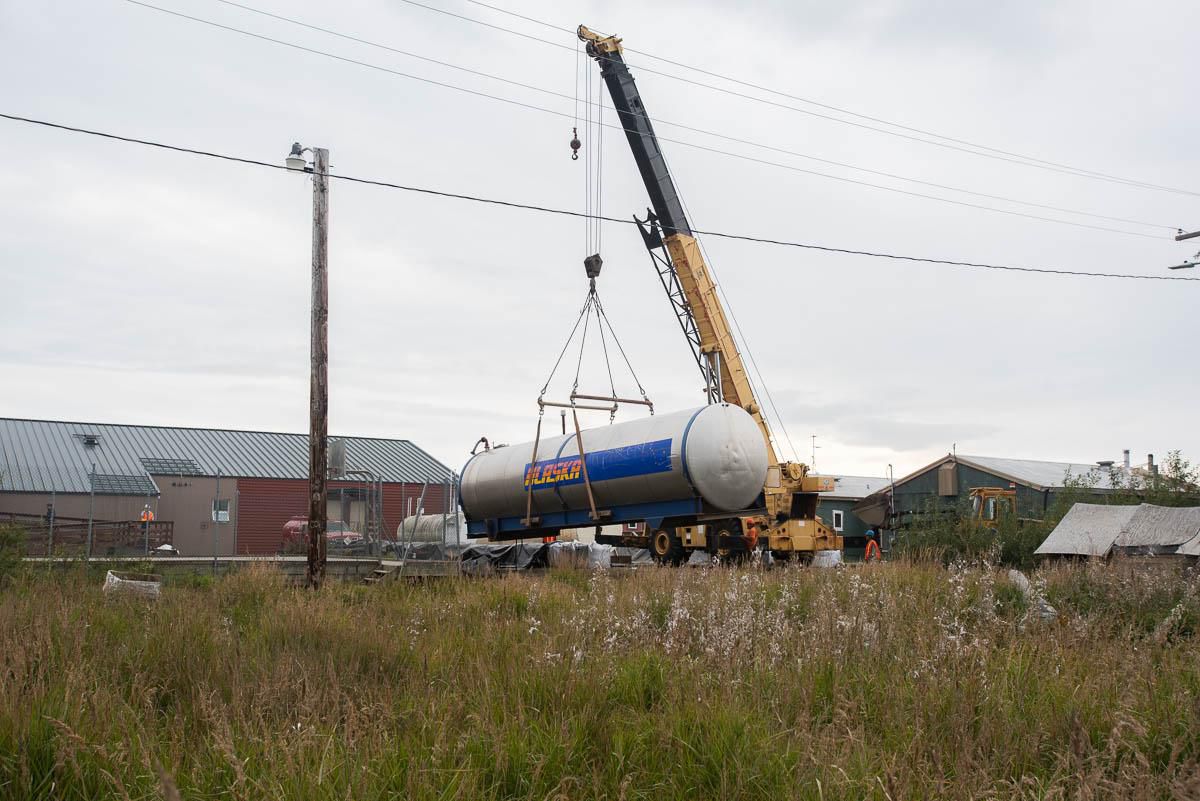 A fuel tank is moved into the new Napakiak School tank farm August 30, 2019. Faulkner-Walsh Constructors contracted with the Lower Kuskokwim School District to meet a deadline issued by the U.S. Coast Guard to transfer 36,000 gallons of fuel from tanks sitting on a rapidly eroding shoreline in Napakiak. (Katie Basile / KYUK)

A fuel tank is moved into the new Napakiak School tank farm August 30, 2019. Faulkner-Walsh Constructors contracted with the Lower Kuskokwim School District to meet a deadline issued by the U.S. Coast Guard to transfer 36,000 gallons of fuel from tanks sitting on a rapidly eroding shoreline in Napakiak. (Katie Basile / KYUK)

The Lower Kuskokwim School District met its deadline to move the Napakiak school’s fuel away from the eroding Kuskokwim riverbank after the U.S. Coast Guard granted a 24-hour extension and the operation extended into the weekend.

On Friday afternoon, a fuel tank hovered from a crane waiting to be lowered into the new site. Meanwhile, diesel flowed from the old tanks into the new ones.

“We’ve moved a lot of buildings and things in the villages, but I don’t think this quickly,” he said.

Walsh is the co-owner of Faulkner-Walsh Constructors, the company contracted by the Lower Kuskokwim School District for the project. Faulkner-Walsh has worked along the Kuskokwim River for more than 20 years, but moving fuel away from a rapidly eroding riverbank is new for them. They didn’t have much time to get the job done either: only nine days once they received the contract.

“Fortunately, we had a barge sitting in Bethel and a lot of the pieces of the puzzle already in place,” Walsh said.

Those pieces included fill and gravel available to create a foundation, sandbags to build a perimeter, and fuel tanks that the school district had already acquired. The one thing they didn’t have was a liner to lay beneath the tanks that would prevent any fuel from seeping into the ground.

The liner had to be custom-made in Fairbanks. With the tight timeline, Walsh couldn’t wait for a cargo jet to deliver it to Bethel. He flew to Fairbanks, rented a U-Haul, and started down the highway. The liner weighs 1,650 pounds. Halfway down the road, just outside of Cantwell, the back wheel of the trailer started falling off.

Stranded, Walsh hired a tow truck from Anchorage to come get him.

All the while, the clock was counting down to a federally issued deadline. The U.S. Coast Guard was traveling the state in mid-August, inspecting fuel tanks, when they heard about rapid erosion in Napakiak. A storm earlier that month had wiped out a main road cutting behind the school.

Petty Officer Joshua Will arrived to investigate, and measured 76 feet between the shoreline and the fuel tanks. This distance between a river and fuel tanks is not uncommon in Alaska. What was uncommon was that distance was closing in.

“You generally see them not too far, because they get their fuel by the barge," said Petty Officer Will. "But what was surprising was the erosion. I have not seen erosion like that.”

The next day, the Coast Guard ordered the school district to move the fuel away from the shrinking shoreline. They gave them two weeks to do it. The Coast Guard called the fuel an “imminent and substantial” threat to public health and the environment.

On Aug. 30, the day of the deadline, Petty Officer Will returned to Napakiak to oversee the fuel transfer and granted the school district a 24-hour extension.

“They offered to work through the night, but the Coast Guard wants everyone to be as safe and rested as possible," he explained. "So we said, ‘Don’t worry about it. We’ll give you an extra day.’”

Ed Pekar is the director of operations for the Lower Kuskokwim School District, and he’s monitoring the project. He described the last two weeks as “rushed” yet “calm” at the same time. Pekar says that the school district had planned to move the fuel next spring. Now, it’ll be one less thing to worry about.

“Obviously, you can look back and say we’d rather not have had the Coast Guard step in, but now that they have, we’re better off going forward. But I don’t know that we would have changed anything,” Pekar said.

Napakiak City Council member Walter Nelson would have changed things. He wishes that the school district had acted sooner.

“You know, we’ve been at them," Nelson said. "But some entities, they’re very reluctant not to take action until the situation is in dire need.”

Napakiak has been alerting the district to the river erosion at least since 2015, when the Napakiak Advisory School Board sent a letter to the school district warning of the shrinking shoreline and asking for assurance that the school would be moved or rebuilt “in the very near future, for the children living here.”