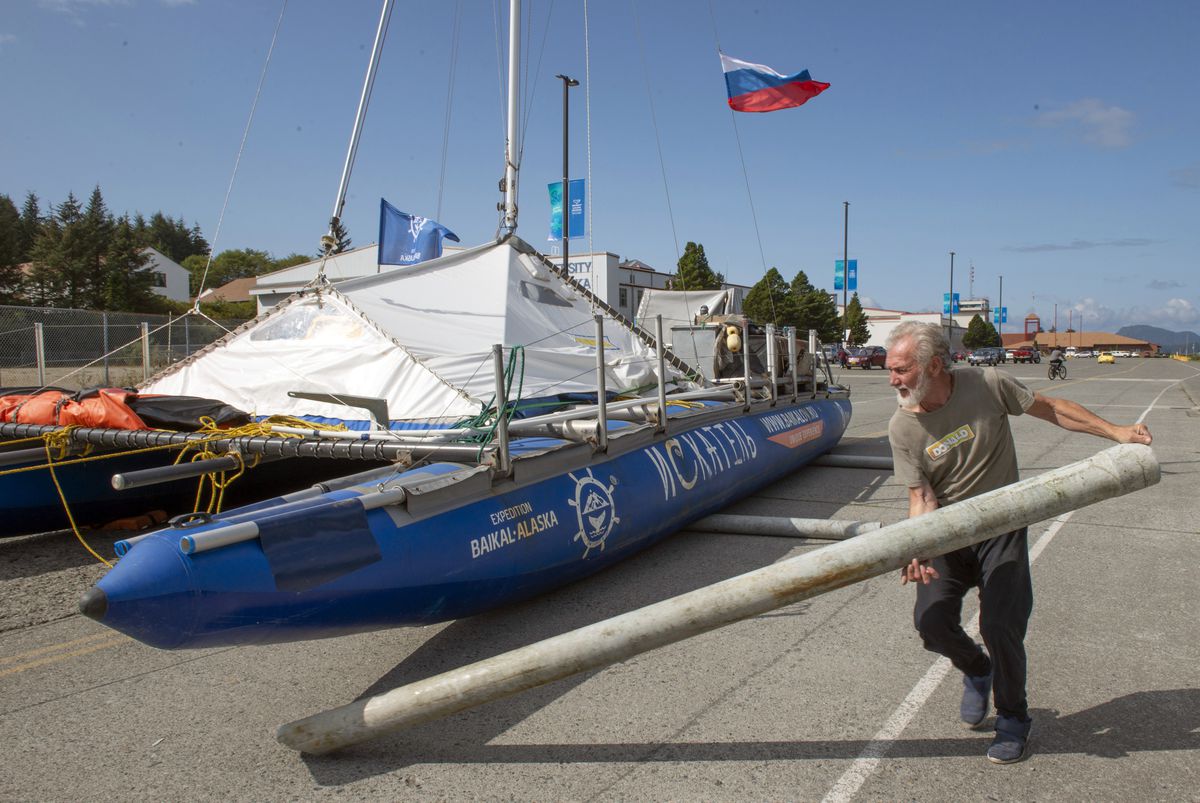 In this Thursday, Aug. 28, 2019 photo, a Russian sailor visiting Sitka aboard another sailboat places pipes under the Russian inflatable catamaran sailboat Iskatel as it is is towed by skipper Anatoly Kazakevich to a spot on the parking lot near the University of Alaska campus in Sitka, Alaska. The boat is on a multi-year expedition from Lake Baikal in Siberia to Alaska. (James Poulson/The Daily Sitka Sentinel via AP)

In this Thursday, Aug. 28, 2019 photo, a Russian sailor visiting Sitka aboard another sailboat places pipes under the Russian inflatable catamaran sailboat Iskatel as it is is towed by skipper Anatoly Kazakevich to a spot on the parking lot near the University of Alaska campus in Sitka, Alaska. The boat is on a multi-year expedition from Lake Baikal in Siberia to Alaska. (James Poulson/The Daily Sitka Sentinel via AP)

SITKA — Russian adventurer Anatoly Kazakevich sailed into town on a double-hulled inflatable sailboat Monday morning, completing the last leg of an 8,000-mile journey to Sitka from the Siberian city of Irkutsk.

Kazakevich and his crew, which ranged between two and six members along the route, sailed the inflatable catamaran Iskatel across the North Pacific Ocean to Homer, Alaska, last year. After wintering in southcentral waters, the Iskatel (which means "searcher") brought Kazakevich to Sitka this week to mark the completion of his Baikal-Alaska Expedition.

Kazakevich described his journey as a "historical geography expedition." He added that "before us, nobody did this (route) for 150 years."

Colonial era journeys of Russian explorers in the 18th and 19th centuries were the inspiration for Kazakevich's expedition. Many places in Alaska still bear the names of those Russians. Baranof Island itself keeps the name of Russian America Company agent Alexander Baranof. Gavan, as in Gavan Hill, means harbor, and Starrigavan translates as "old harbor." Medvejie, as in Medvejie Lake, is bear in Russian. Sitka was once called New Archangel when the town served as the capital of Russian America.

Unlike the lumbering tall ships of the 1800s, the Iskatel runs on a combination of two outboard engines and four lateen sails. The crew is housed in a tent that extends across the twin hulls of the inflatable, 40-foot vessel.

Also unlike historical explorers, Kazakevich was aided by electronic charts and GPS navigation devices. He said the catamaran normally runs at about 10 knots, but reached an exceptional speed of 18 knots in intense wind near False Pass.

The crew of the Iskatel began the expedition with a traverse of Lake Baikal, one of the largest lakes on Earth, and from there followed the winding river networks of eastern Siberia to the Sea of Okhotsk. The crew even portaged the boat over mountain passes.

Despite the ongoing policy disagreements between Moscow and Washington, Kazakevich believes that the everyday citizens of Russia and the United States have a lot in common.

"I think that people in Russia, in Siberia especially, and in Alaska are very, very similar," Kazakevich said, observing that Alaskans and Siberians alike place a high value on hunting, fishing, and wild places. He told the Sentinel that the Iskatel's odyssey has no political motive, except for his belief that Americans and Russians can live side by side without issue.

Kazakevich reported that his reception in American towns has been positive. He said Americans from Nome to Homer to Sitka have been "very friendly."

The first Sitkan Kazakevich met upon his arrival in Sitka waters was Jeff Moebus, who lives on his sailboat in Eliason Harbor. The two met when Kazakevich docked his craft in the berth next to that of Moebus.

Moebus, who was in the Army during the Cold War, blames the tension between the U.S. and Russia on Moscow and Washington.

"It has nothing to do with Sitka or Irkutsk," he said.

Kazakevich extended a special thank you to the University of Alaska, Southeast, which has offered to store the catamaran over the winter. This kind of help will be essential to Kazakevich's plans for the return voyage that he plans for mid-May next year. That may turn out to be a group venture, or a crossing by a sailboat flotilla, he said.

Kazakevich said that "we can invite people on board, sailing together next year (to Irkutsk) from Sitka on two, three or five boats together." He hopes that Americans will accompany him on the return voyage, and offered to help arrange visas. The voyage will take all summer.

Kazakevich's contact information can be found on his website, en.baikal-alaska.ru. He said he also has plans to publish a documentary film and a book about his journey.

Kazakevich noted that, though the journey is over for the moment, "for all people (involved), this expedition has changed lives." He hopes that Americans and Russians can find common ground, and told the Sentinel that "when we have a connection, people to people, we don't need politics."

He said he planned to visit other places in Alaska by airplane before returning to Russia for the winter.

From The Sitka Daily Sentinal via the Associated Press.

Correction: An earlier version of this article incorrectly identified the name of its author.