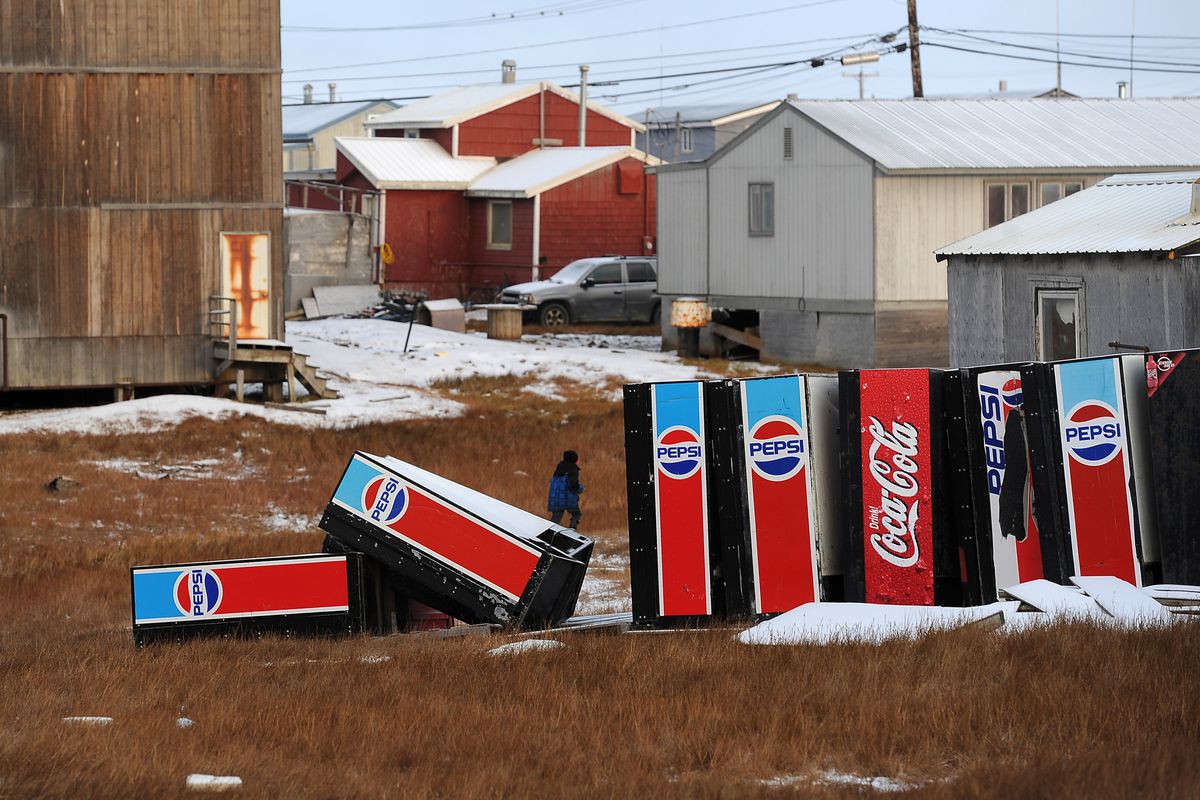 Vending machines are stored on a lot in Utqiagvik in 2015. (Erik Hill / ADN archive)

Vending machines are stored on a lot in Utqiagvik in 2015. (Erik Hill / ADN archive)

Alaska’s farthest-north town may also be its first to impose a tax on most sodas and other sweetened drinks.

On Tuesday, voters in Utqiagvik will be asked whether they want to tax such drinks sold in the city. According to a description of the proposed ordinance, it would impose a 1-cent-per-ounce tax “upon the sale of sodas, energy drinks and similar sugar-sweetened beverages, if such tax is approved by the voters.”

The tax doesn’t include 100% fruit or vegetable juices, milk products, medicinal drinks, baby formula, weight-loss drinks or alcohol. Because qualifying beverages must have at least 2 calories per ounce, according to the text of the proposed ordinance, zero-calorie sodas and bottled water also would not be taxed.

Seventy-five percent of the tax proceeds would be reserved for “youth programs and activities sponsored by or conducted by the city,” according to the text of the proposed ordinance.

“I hope it’s implemented. I’m not going to hold my breath, though,” Edwardsen said, acknowledging that convincing Utqiagvik’s 4,500 residents might be difficult.

State tax assessor Marty McGee wrote by email that if Utqiagvik were to impose the tax, "to our knowledge, this is the first official ‘soda tax.’ ” Nils Andreassen, director of the Alaska Municipal League, agreed with that assessment.

The resolution imposing Utqiagvik’s tax references local rates of diabetes, obesity and tooth decay as reasons for imposing a system that would “discourage excessive consumption of sugar-sweetened beverages.”

But Edwardsen, who has four kids and one more on the way, said the tax is mainly a way for the community to make money.

“The real point of taxes is to make money. That’s what it’s for,” she said. "If we’re going to be poisoning ourselves, we might as well make money.”

Edwardsen doesn’t buy soda for her children, but she does buy apple juice drinks that are not 100% juice and would be subject to the tax.

“The juice would be considered a sugar-sweetened beverage,” she said.

Utqiagvik has perennially attempted to provide recreation and opportunities for its younger residents, and Edwardsen said the tax could fund a project like a bowling alley or a movie theater.

Public reaction to the tax has been limited so far, she and Mayor Suvlu said by phone. There was little public testimony during the city council meeting, though a town hall meeting last Thursday about the soda tax and other ballot measures in Utqiagvik did garner more attention.

Jeff Maupin is one of the people who attended the town hall meeting. For 25 years, he’s operated a small business stocking Utqiagvik’s vending machines, and he’s opposed to the tax.

Margins are tight in Utqiagvik, he said. A can of soda is $2. A 20-ounce bottle is $4. Most of that comes from shipping and the other costs of doing business. More than once, he found that his stock froze while being shipped. Weather and vandals have ruined some of his vending machines.

“Many times, I feel like I’m running a nonprofit organization,” he said.

The proposed soda tax, he said, “just adds one more administrative cost and effort to bring product to the market.”

When Maupin heard about the tax proposal, he contacted his distributor and the Alaska Beverage Association.

According to campaign finance reports, the beverage association — the trade group for the soda industry in Alaska — is opposing the tax. The association has sent flyers to North Slope Borough residents and is placing an ad in the Arctic Sounder newspaper.

The association’s listed members did not respond to emails or calls seeking comment, and the organization’s campaign filings do not disclose the source of its funding.

The organization’s president is a sales manager for PepsiCo in Alaska, and its vice president is an official with Odom Corp., the state’s largest soda distributor. The beverage association shares a building with Odom in Anchorage.

Signs opposing the tax and bearing the president’s name have been hung by the cash register at the store she uses, Edwardsen said.

That kind of opposition makes her pessimistic.

“We have no funds to compete with them. All we have is us council members spreading the word of mouth,” she said. “There might be a small sliver of hope that the people who do vote are going to have some sort of sense.”

She said that although the odds might seem long, she thinks it’s worth trying.

Correction: A previous version of this story misspelled the name of the mayor of Utqiagvik, whose last name is Suvlu, not Suvalu.