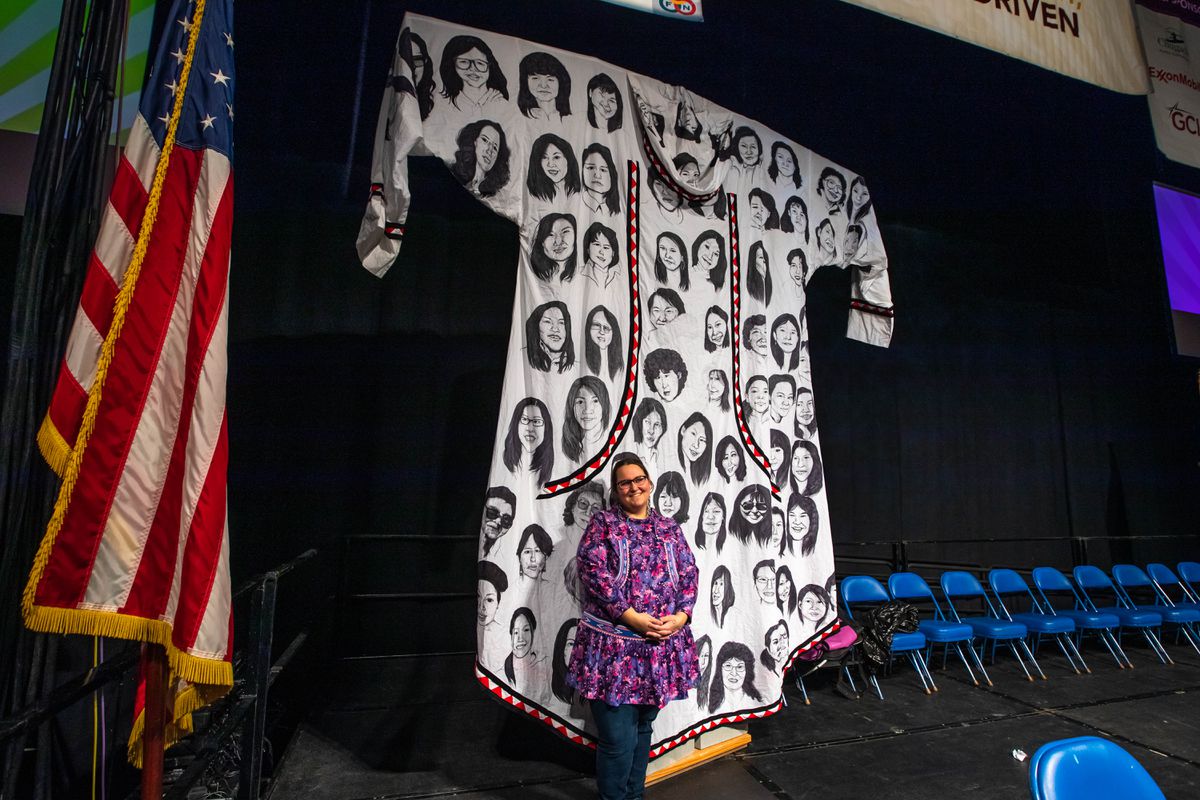 Amber Webb stands with her 12-foot qaspeq Thursday during the Alaska Federation of Natives convention at the Carlson Center in Fairbanks. Webb made the qaspeq, which displays portraits of over 200 Alaskan, Canadian, and Native American Murdered Indigenous Women and Girls. (Loren Holmes / ADN)

Amber Webb stands with her 12-foot qaspeq Thursday during the Alaska Federation of Natives convention at the Carlson Center in Fairbanks. Webb made the qaspeq, which displays portraits of over 200 Alaskan, Canadian, and Native American Murdered Indigenous Women and Girls. (Loren Holmes / ADN)

The details of the women’s deaths, some relayed in news reports, touch her emotionally as she stitches together the 12-foot-tall showcase garment.

“Sometimes I get nauseous or I get dizzy, and I have to take breaks," she said.

Webb’s artwork, and the issue of missing and murdered indigenous women, was displayed front and center at the Alaska Federation of Natives convention beginning Thursday in Fairbanks. The state’s largest Native organization focused attention on the lack of police and high crime rates in rural Alaska, particularly against indigenous women.

Adding to the urgency Thursday was an announcement from state authorities that Brian Steven Smith, 48, is accused of killing a second Alaska Native women after he had previously been charged in the murder of Kathleen Jo Henry in a separate incident.

The Urban Indian Health Institute in Seattle reported in 2018 that Anchorage, among 71 cities studied nationally, has one of the highest number of unsolved cases involving missing and murdered indigenous women.

Gail Schubert, an AFN board member who moderated a panel on public safety problems in rural Alaska, asked for a moment of silence from the stage in recognition of the deaths of the two women.

“I wanted to acknowledge that this is an issue that we as a community need to address and solve," she told a reporter afterward.

Behind Schubert and panelists stood the giant garment, stretched over a support stand, sleeves extended and hood draped, a powerful backdrop to the discussion.

Webb hopes the qaspeq highlights the crisis and helps families heal. Perhaps it will lead to some cold cases getting solved as attention is drawn to unsolved cases, she said.

The Department of Public Safety this week for the first time released the names of victims in cold cases dating back to 1961 to encourage people to come forward with information. The site lists 69 unsolved murders, and 109 people who have gone missing for undetermined reasons.

“We’re hoping the public will be inspired to get involved and help put more of these cases to rest," said Col. Barry Wilson, director of Alaska State Troopers, in a statement this week.

He said new information, such as DNA from a family member or dental records that can be matched to remains, can help an investigation.

Addressing AFN on Thursday, Gov. Mike Dunleavy said the state is taking steps to process a backlog of rape kits that contain evidence of sexual assault — including some collected decades ago — no later than September 2021.

He said the state has hired a prosecutor and investigator dedicated to solving cold cases.

“I am committed to solving all these cases,” he said. “Justice should be swift. Families should not have to wait decades for answers.”

The larger version, funded with a grant from the Rasmuson Foundation, will depict up to 250 women from Alaska, the Lower 48 and Canada who have gone missing or were murdered over the last half century.

It’s based on the garments — qaspeq in Yup’ik, also known as a kuspuk — recognizable for their bright, floral patterns, trim along the edges, and a pouch pocket where hands are joined for warmth.

Webb, 34, stood waist high to the qaspeq as she described it Thursday. She chose it as the canvas for her art because it symbolizes the adaptability and strength of Native women, many of whom hold prominent positions on corporate boards, in universities, in government.

She said a family member asked AFN officials if it could be displayed onstage, and the group agreed. AFN President Julie Kitka said she hopes it stays up until the convention ends Saturday.

“It means a lot to a lot of people,” Kitka said. “Art can communicate in ways that words can’t.”

About 100 faces are already displayed on the front of the qaspeq, but Webb is still adding victims to the back.

Many of the faces, drawn in Sharpie marker from pictures sent to her by families, are smiling.

But they tell tragic tales.

In the center is the image of Ashley Johnson-Barr, the 10-year-old girl from Kotzebue with the big smile who last year was kidnapped, sexually abused and killed, her body discovered on the tundra after a search by authorities.

Webb put Johnson-Barr in the middle of the qaspeq to highlight a case where Alaska State Troopers and the Federal Bureau of Investigation did things right, quickly identifying and charging a defendant from the Northwest Alaska region, Peter V. Wilson, who now sits behind bars.

On the left sleeve is Sophie Sergie, with curly hair, looking happy and wearing glasses, before her killing at age 20 in 1993 at the University of Alaska Fairbanks. In February, Steven H. Downs was charged with her murder and sexual assault after authorities used DNA evidence and new technology to crack the case.

Next to her is Della Brown, grinning, with dark long hair. She was 33 when she was raped and killed in Anchorage in 2000. Convicted murderer Joshua Wade confessed to her killing.

Webb said the inspiration for the project is the case of her close family friend, Valerie Sifsof, who has not been found after she went missing in Anchorage in 2012.

“This project was to honor her and all the Native women who have not gotten justice,” Webb said. “I hope we get more answers for all of them.”