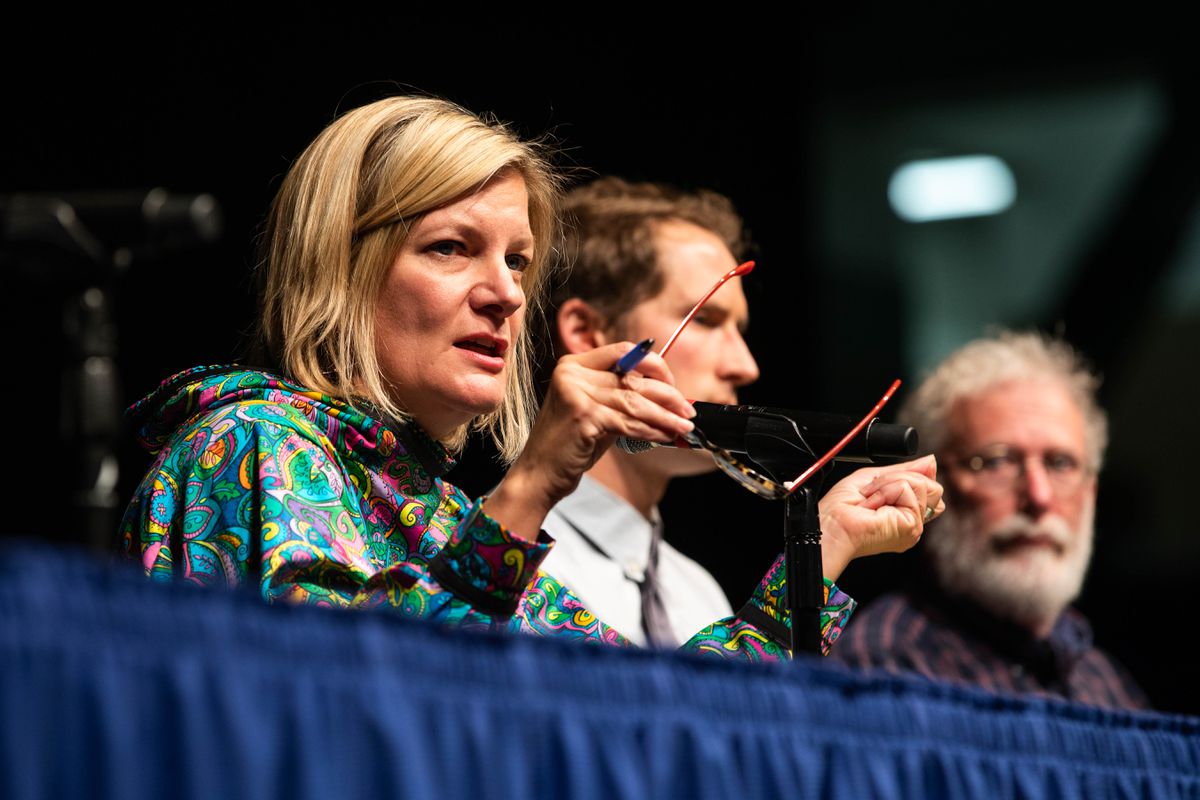 A backlog of cases in the state’s criminal justice system is only going to worsen, the state’s former attorney general told Alaska Federation of Natives convention during a panel discussion Friday.

“I have bad news -- it’s going to get worse before it gets better,” said Jahna Lindemuth, attorney general under former Gov. Bill Walker.

The recent repeal of Senate Bill 91 means more nonviolent offenders will be introduced into the criminal system instead of getting treatment services, Lindemuth said. Efforts by the state to increase the number of troopers will cause more charges to be filed, adding stress to the system.

More resources are needed, she said.

AFN, holding its 53rd annual convention in Fairbanks, is seeking solutions to problems in government from the federal to local levels. A Friday afternoon panel addressed the challenges facing the state’s courts after Fairbanks Superior Court Judge Michael A. MacDonald in August declared a crisis in the criminal justice system as turnover among public defenders delays criminal trials.

Lindemuth, now a private attorney, said the number of pending Superior Court cases jumped by close to 30% between 2017 and 2019.

But it’s hard to compete with salaries offered in the Lower 48 for stressful jobs that deal with murder cases, sexual assault and other major crimes.

"Our salaries once were very good,” he said. "They are no longer comparable.”

The state needs to support alternatives, such as allowing tribal courts to handle a broader number of cases, he said.

The president of one of the state’s top Native corporations told the Alaska Federation of Natives convention Friday why the group took its unusual stand to support the recall effort against Gov. Mike Dunleavy.

Sophie Minich said Cook Inlet Region Inc. hoped after Dunleavy’s election last year that his plans to streamline regulations and balance the budget would be good for business interests.

But Minich said CIRI, representing Alaska Natives with roots in much of Southcentral Alaska, became concerned when the “governor began testing the limits of Alaska law" and even showed “outright defiance” of the law.

“The governor’s violations of separation of powers, and misuse of state funds and the impacts of his misguided, ill-advised attempts to decrease government spending in Alaska were all a part of CIRI’s wake-up call,” she said.

Minich did not specifically describe the governor’s actions during her short speech to the convention audience, called “Taking a Stand.”

She said CIRI could not stand by quietly while the governor slipped below the “bar of decency and honesty” the corporation strives to meet.

The Recall Dunleavy group that CIRI supports has said the grounds for recall are based on a number of actions by the governor. They say he violated Alaska law in March by refusing to appoint a judge to the Palmer Superior Court within 45 days of receiving nominations, and misused state funds for direct mailers and other ads that made “partisan statements about political opponents.”

Dunleavy’s office said Friday it could not respond to Minich’s statements.

“The press office can’t assist you with stories regarding the recall,” said an email from Jeff Turner, a spokesman for the governor.

[Recall campaign against Gov. Dunleavy, and the defense, are accelerating even before certification]

Walker gets warm welcome at AFN

Former Gov. Bill Walker received a standing ovation on Friday after a speaker alerted the AFN crowd that he was attending the conference.

The generous welcome followed the unusual outpouring of support for Walker at last year’s AFN convention, after his surprise announcement to the convention that he would end his reelection bid.

Native leaders last year showered him with gifts and praise in a remarkable and unexpected farewell that included songs, prayers, tears and standing ovations. It lasted half an hour.

Walker, losing in the polls then, had built strong relations with tribal governments. The day before he pulled out of the race, he took the unusual step of apologizing for historical wrongs done to Alaska Natives.

Walker said Friday that last year’s impromptu ceremony was the most memorable moment of his four years as governor.

Around his neck he wore one of the tribal chief’s necklaces he was given as a gift last year as people adorned him with family heirlooms and other personal items to express their gratitude.

“I have never experienced anything like that,” Walker said. “It was such a total surprise to me.”

“The irony is it started with a devastating moment that was followed by an incredible show of appreciation,” he said.

Walker, who has returned to practicing private law in Anchorage, said he was honored by Friday’s reception. He’s attending the convention because he enjoys it, and to again say thank you to Alaska Natives.

During his years as governor, Walker said, Natives welcomed him into their homes, their whaling ceremonies, their potlatches and other important family events.

“Those go into the memory bank and don’t come out,” Walker said.