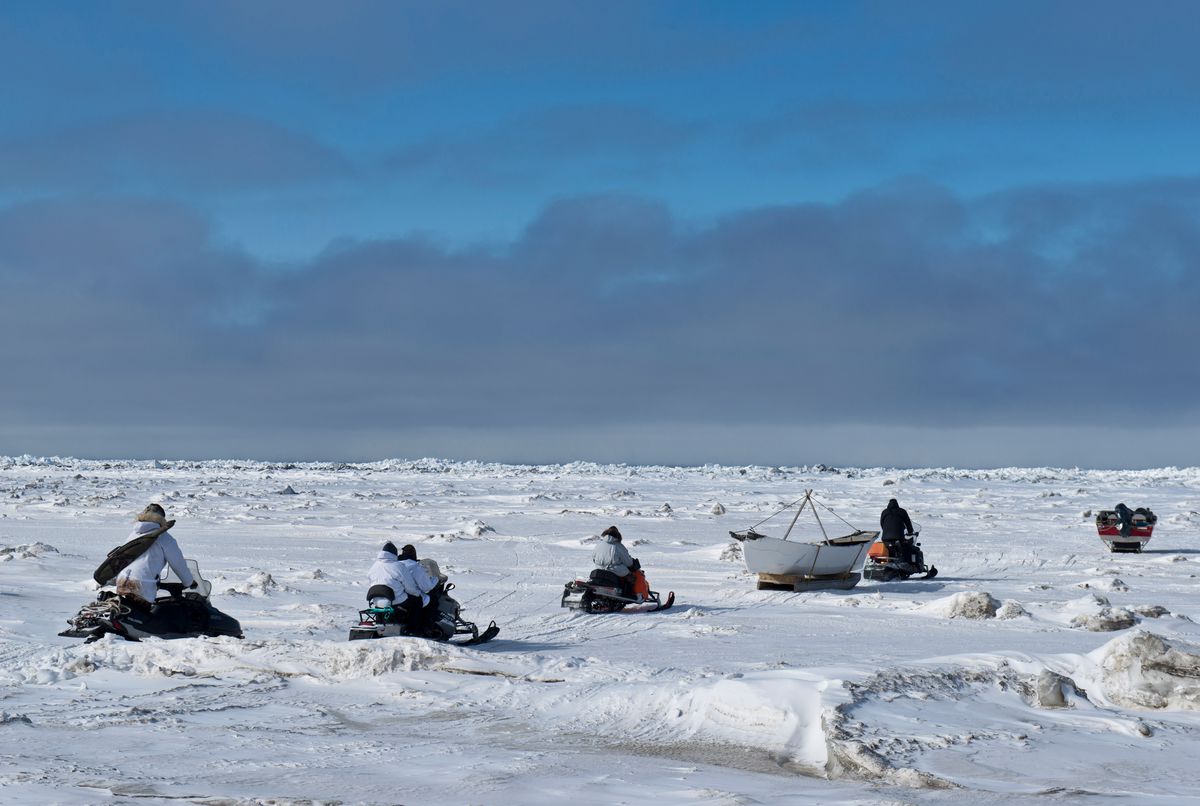 A whaling crew heads out of Utqiagvik onto the sea ice toward open water to begin their bowhead whale hunt on April 17, 2016. (Marc Lester / ADN)

A whaling crew heads out of Utqiagvik onto the sea ice toward open water to begin their bowhead whale hunt on April 17, 2016. (Marc Lester / ADN)

“Yay Hey Hey!” The cheer went up in town, on social media and out on the water Nov. 16 when Panigiuq Crew landed the first whale of the season for Utqiagvik, later than many people can remember ever bringing one in before.

"It's a really big blessing for all of us," said Captain Qulliuq Pebley. "It brings a lot of good food. It brings families and a whole bunch of different people together."

The crew, which many also refer to by their family name of Panigeo, was one of the last to remain out on the water this late in the fall, still searching for bowheads.

“Such a happy time,” said Tasha Aina, the captain’s sister. “(It is a) very long-awaited celebration not just for us but for our community.”

It's been a challenging year for whalers in Utqiagvik. Crews started going out in September, but found the bowheads weren't appearing in their usual concentrations in the waters closer to shore.

As the Sounder previously reported, scientists with the Aerial Surveys of Arctic Marine Mammals program were making similar observations. While the whales seemed on track in July and August, by September, they didn’t appear to be following their typical course and timing along the North Slope coast.

“At the beginning of the season everyone had a sense of anticipation, but as the season dragged on and the community started losing hope, we sort of doubted our ability. No matter where you went, captains, hunters and wives and crew members whispered among themselves, ‘Have your guys seen a whale yet?’ ‘None!’ ‘My guys went (a certain number of) miles and saw nothing. Not even one blow,’” said Natasha Itta.

“Week one came and gone, week two, week three, the anticipation grows, week four passes and people start to park boats and call it a season. There were one or two active crews who keep going out in the hopes that they would be blessed with a whale.”

As the season continued with few to no bowheads in reach, crews began to pull in their boats. The cost of food and fuel started to add up, along with the pressures of being away from family or jobs, making it tough to stay on the water all day, every day. Additionally, the light — which makes it safer to be on the water — was dwindling as the Arctic headed toward its final sunset of the season.

Some crews joined their efforts, going out together to search rather than putting more than one boat in the water at a time.

"We come from a praying community and the cry out for prayers has been apparent on social media since early September," Itta said. "When you begin to lose the light and hope that once lit bright inside, you realize that maybe that's when the miracles will happen."

On Nov. 16, a few different crews were out on the water once again.

"There was hardly any wind and it was maybe like 15 degrees and cloudy," said Pebley.

When they're out, the crews often keep in regular radio contact, both for safety reasons and because if everyone shares information, it increases the likelihood that one crew will find success.

It was this spirit of partnership and working together that paid off that day.

"Another boat had spotted it and then they called over the radios telling everybody that they saw a whale and then they gave us their GPS coordinates," Pebley said. "Pretty much all the boats that were out there that day went over to that area and we chased it for a little bit and then we harpooned it."

On the boat with Pebley were one of his uncles and his girlfriend’s father, he said. They towed the 25-foot, 4-inch agviq back to shore, where everyone helped to pull it up.

"I woke up Saturday morning and immediately, three of my family members messaged and texted me saying that my captain may have struck a whale. I immediately shot up from bed, said a prayer of thanksgiving and immediately got ready with the faith that this whale was going to be a successful hunt. I got confirmation 15 minutes or so later and I was already ready to go," Itta said.

“Immediately, the town sighed a huge sigh of relief. By the time the ladies of the crew got the house and kitchen ready, and we headed out toward Pigniq, we were immediately greeted with a long line of red lights and cars awaiting the arrival of the whale. People were hugging, crying, yelling and screaming with joy.”

It's a relief for the community, which relies on the whales for sustenance throughout the year, especially during the holiday season.

In Utqiagvik, Thanksgiving and Christmas feasts around town center around the gift of the whale. Crews pass out portions at churches and gathering places to anyone who comes. Last week, captains had to consider what would happen if no one landed a whale. This season has been marked by uncertainty, and left many with unanswered questions about what the future may hold.

"It feels almost complete," said Asisaun Toovak. "I need a new word for how it feels because it is a mix of emotions — safe, complete, relief. The community was fed a whale we waited a long time for (with) two months of prayers, 10 hours of boating three or more times a week, and over a thousand gallons of gas. So, to see the whale pulled up, you exhaled, like I've been holding breath for a long time.

As always, when a whale is caught, a flag goes up over the captain’s home, where people gather to pick up their portions, along with other food like rolls and doughnuts and more.

“When we served the whale, our crew members bought 600 disposable cups to serve the siignaq (stewed fruit) and we ran out of the siignaq and still half of the folks hadn’t entered the home,” Itta said. “I’m guessing about 1,100 men, women, children and elders came in to receive a sample of the whale.”

For the crew and community, it was a joyful time. For Pebley, it just happened to coincide with another special occasion.

"When we served the whale, it was on my daughter's first birthday, so instead of a small birthday party with like 20 people, she got 600," he said, laughing. "It will be hard to beat that next year."