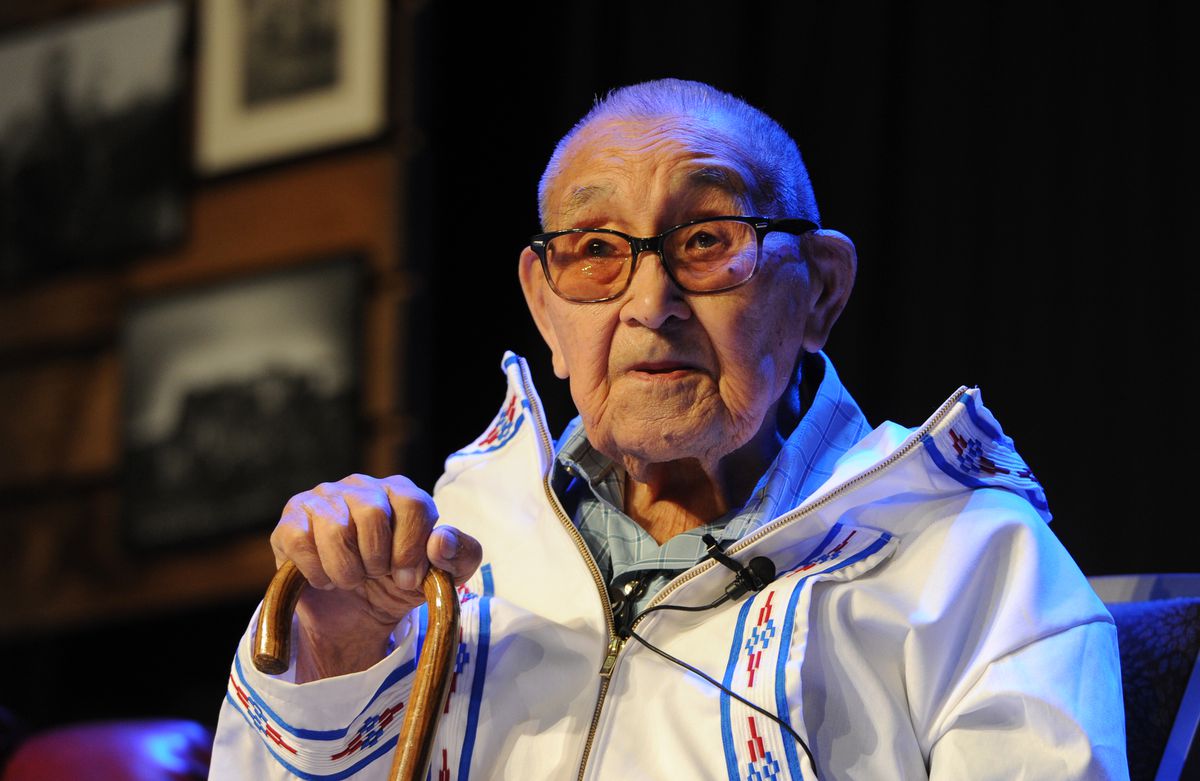 UTQIAGVIK -- When Ugiaqtaq Wesley Aiken was a boy, the world looked far different than it does now.

"There was only sod houses," he told Karen Brewster and Craig George in a 2017 interview for the University of Alaska Fairbanks' Project Jukebox. "They build big as this room, maybe."

There were no cars, no electric lights, no helicopters in the sky. There was the land and the sea and he knew both.

He was born on Jan. 25, 1926, to Pamiilaq Lucy Aiken and Aviugana Johnny Aiken and grew up in Isuk, east of Utqiaġvik. He was 6 or 7 when he first went seal hunting, he said, and learned how to go whaling from his mom’s first cousin, his uncle Ned Nusunginya.

He grew up when it was still common to see 50-foot pressure ridges out on the ice. He grew up before the village of Nuiqsut was created and before the North Slope Borough came to be.

"We went hunting and camping with dog teams," said his daughter, Martha Ikayuaq Stackhouse, 71. "Those are some of the earliest memories I have. You know, this was way before snow machines came out. We'd go anywhere for hunting — geese hunting, caribou hunting, going down the coast before the ocean ice went out. We'd take the umiaq boat and hitch it up to dogs. We'd put all our gear inside the boat and everything and then they'd pull it until we got to our campsite."

There was more old ice then and the patterns of the weather were more predictable than they are now.

"No heavy ice out there now," Aiken recalled for Project Jukebox. "Ten ... years ago. The ice is say — that heavy ice is almost melt. But some places maybe way out there still got some, but it never got up to Barrow anymore."

He was like a time capsule of knowledge and experience, Stackhouse said. Her father adapted to an immense number of changes throughout his lifetime. But that's not surprising. In the Arctic, people have been adapting for generations, she said.

“The biggest change was the weather. He was always aware of the weather, of the global warming here in the north. That was the big change that he saw,” she said. “Some of the other changes are he went from dog team to snowmachine and then the military came in with jeeps and trucks. They were the ones with jeeps and trucks. But eventually, so did the town. People started buying trucks and cars and jeeps. Technological (changes, too) — even in my time, some of our lights always went out for days and days even when I was a little girl. Now they fix them right away. We think 45 minutes is a long time.”

She chuckled as she described a recent blackout in town and how much technology has come along since her father was young.

"He never thought that he would go into this world — into this computer age world, from complete subsistence. He's seen a lot of changes in a lifespan," she said. "You know, we've always adapted. We've always adapted even in traditional times to the situation. So, he was OK with it. He accepted things. One time, him and I went to Hopson Middle School and gave a talk and one of those kids asked him, 'What's the best technology that you like?' And he got something out of his pocket and it was the clicker to turn on your car. He said, 'That's real good.' In his older age, he doesn't feel like going out and starting the car. He can just click it, sometimes in the middle of the night just to warm it up before it freezes. He was happy about that."

Growing up in a time of subsistence and change, Aiken learned to be a reindeer herder as a young teenager. He worked with herds for three years, until he was 17. He didn't want to be a burden on his parents, so he always tried to be self-sufficient, Stackhouse said.

He was a member of the Alaska Territorial Guard and he worked for a time as a laborer and in construction. He also learned to be both a light and heavy duty mechanic.

In 1947, he married his wife of many years, Attagnaq Anna Kayutak. He became a whaling captain and was witness to some of the greatest political and social changes on the North Slope throughout his middle age.

He participated in the Barrow Duck-In in 1961 and was a passionate and tireless advocate for his culture, language and traditions.

Stackhouse said she was away at the Wrangell Institute when the Duck-In happened, but remembered how much hunting bans and the subsequent action affected her community.

"The whole town was talking about it. Everyone participated. Even the women and children, they took a duck," she said.

Years later, she was out hunting with her family when a helicopter landed at their campsite.

"We hid our geese in our sleeping bags," she said. "They landed and they looked around and didn't see any geese. We said, 'We're camping.'"

"All those men that were my dad's age, they've already passed on, but they all worked together to overturn that," she said.

From there, Aiken worked hard to promote the passage of the Alaska Native Claims Settlement Act. He helped with the formation of the Arctic Slope Regional Corp. and the North Slope Borough and was one of the first employees of Ukpeaġvik Iñupiat Corp. when it was founded in 1973. He held the position of land chief.

Fighting for Native rights and representation was not an easy task. Through those long and arduous years, Aiken learned to hone new skills that he passed down to younger generations.

"He always encouraged young people to get their education," Stackhouse said. "He was a firm believer in education and to come back and help your people, to make sure that you know the fine lines in whatever proclamations or laws that come in that would involve our land and our culture. He believed in the young people."

Aiken never turned down an opportunity to pray for his community or to spend time with people younger than himself. For his work, he was chosen as the Elder keynote speaker at the 2018 Elders and Youth Conference.

"He was always there, willing to share his knowledge," said Patuk Glenn, who introduced him before his speech. "He was always patient with us."

Speaking to the youth that day, he told them to respect their Elders, the land, the animals and each other.

Times had changed, he told them, but the same strength still exists today.

"And he says, 'I know you young people are smart. You're going to have to start taking over,'" said Stackhouse. "So, he was, in a way, telling them he's passing the torch to them."

Stackhouse said her father never gave up hoping for Iñupiaq language immersion camps for youth. He wanted young people to learn the language and pass it on to the next generations. It's something he would have liked to see in the future, she said.

Looking back on her time with her father, Stackhouse said people can learn from him even now.

"To be humble. You can't say I'm going to catch a whale or I'm going to catch this many caribou because it doesn't work out that way. You have to ask for a blessing from God. You can't be haughty about things. You can never know what's going to be in the future," she said. "And to love. To show your love to one another, rather than just saying it and then mistreating each other, not to do it that way. Show your love to one another, no matter who the person is, whether it's up the financial scale or down, homeless people, you've got to show respect for one another and treat each other with respect."

Aiken was someone the community looked to for spiritual guidance, she said. He was the oldest man in Utqiaġvik when he passed on Jan. 6 and had the kind of wisdom, knowledge and experience that comes from a long and full life.

"Some of the Elders that I went and hugged said they're sure going to miss him because it's always a blessing just to see him and that just having his presence around was always calming and reassuring to them," she said. "That's what some of the younger Elders were saying to me."

Aiken was a familiar face to everyone in Utqiaġvik. He attended every whaling service and led the community in prayer at gatherings like last year's Kivgiq. He was a part of his community and they, a part of him.

And that's how it was until the very end, Stackhouse said.

"His birthday was going to be on the 26th, so he was 19 days short of his birthday," she said.

His family had already gathered some food they were planning to cook for his birthday, she explained. When he passed, they brought it out and prepared it with care.

"We decided to serve it to the people who dug his grave," she said. "So, there were a number of people that came over to the house for a big dinner."

They honored him and appreciated his life as a kind and humble man and beloved Elder in the community. It reminded Stackhouse of another moment in her father's life.

"Maybe three years back, one of my grandchildren, one of his great-grandchildren asked me, 'How come we always have to have a birthday with everybody, with the community? Why can't we just have birthday with just us — just the family?' And I said, 'Because your amau belongs to the whole community. He doesn't belong only to us. So, we have to share it with everybody.'"