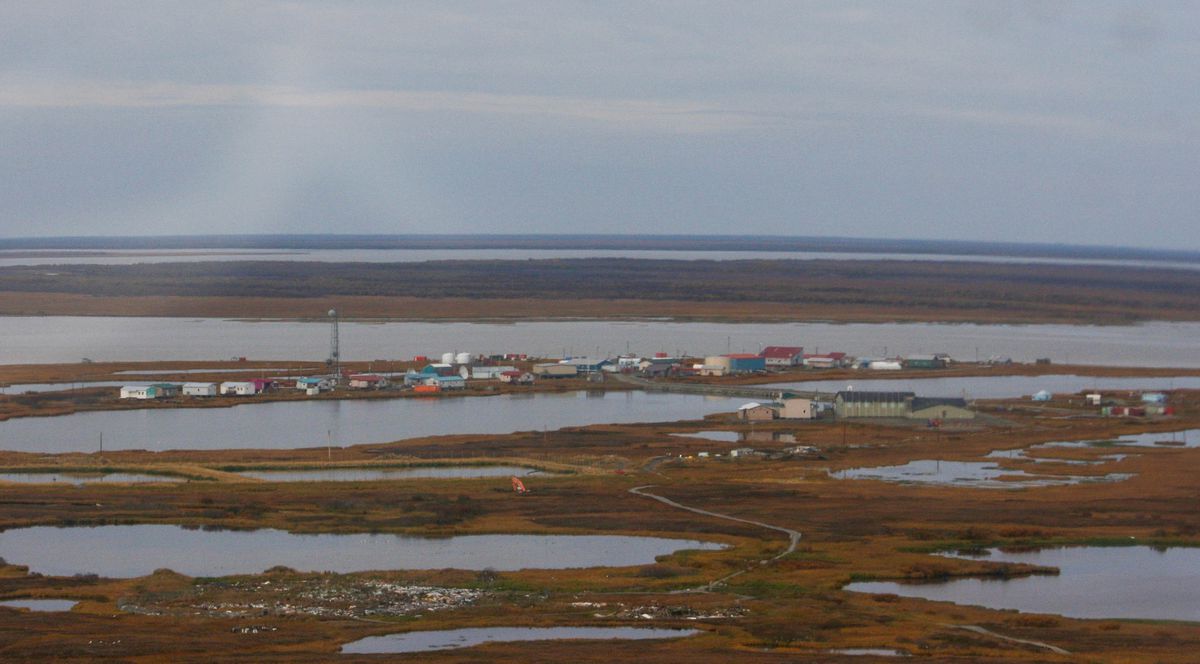 This article was originally published by KYUK Public Media in Bethel.

On Sunday, four children from Nunam Iqua said they were going on snowmachine to the dump just outside town. They ended up 18 miles south of the village, on the Black River, where they spent over 24 hours outside without shelter.

When searchers from Scammon Bay found them on Monday, they reported, the kids were not in good condition.

Bryan Simon and his team of search-and-rescue volunteers left Scammon Bay around 10:30 a.m. Monday. Snowmachining along the Black River, Simon scanned the white landscape for any minute detail, as he’s been trained to do.

A hundred yards away, on the highest snowdrift, he saw something he said was suspicious.

“It didn’t look normal, it didn’t look like anything. And then as I got kinda closer, I seen movement,” Simon said. “I couldn’t believe my eyes.”

He signaled the rest of his four-man team, and they approached what they would learn were the four missing boys from Nunam Iqua.

“Right away, I look for that little infant. When I got kinda close to them I thought I only seen one kid,” Simon said.

That’s because Simon saw just one mass, all four children bundled together. They had dug a hole in the snow, about a foot deep, 3 feet in diameter.

“The infant was in there,” Simon said. “And the boy laid over the infant, and on his left side, a little older boy covering the draft. And the 7-year-old was laying right above them like he was blocking the wind.”

“They were protecting the baby,” said Herschel Sundown, Simon’s teammate.

Sundown, a former health aide, approached the scene and started assessing the children. The oldest had on a pair of sweatpants that had become soaked. One of the other boys was missing gloves.

“I won’t get in exact detail, out of respect for the boys, cause from what I hear, they’re still in some critical condition. I’ll just say it didn’t look good,” Sundown said.

The rescue team immediately got to work, slowly warming the boys. They removed the boys’ wet clothes and wrapped them in parkas the search members had been wearing.

“One of the guys put a canvas tarp over us and we huddled with all of them to try to give out some heat to them,” Sundown said.

Then he started peppering the boys with questions.

“What they can and cannot feel," Sundown said. "If they’re able to feel us touching them." He did not say whether the boys could feel their touches.

During this time, the search team’s leader radioed the Coast Guard.

“And I wanna say 15 minutes or less, we were able to hear a helicopter coming,” Sundown said.

The mission may have ended for the searchers, but for Christopher Johnson, 14, Frank Johnson, 8, Ethan Camille, 7, and 2-year-old Trey Camille, the battle is not over. The Coast Guard transported the children to Bethel, where they were being treated for severe hypothermia at the Yukon Kuskokwim Health Corp. hospital.

Still, these are boys who have already defied the odds. Sundown says their rescue was lucky. They were in an area other searchers had passed through multiple times without seeing the children.

“And it’s just the angle that we came in that we were able to spot them,” Sundown said. “We didn’t think we would find them, but we did.”

Plus, they survived over 24 hours outside, through the night, forming a human shelter for the 2-year-old brother to stay warm.

“In all honesty, I don’t know how they survived,” Sundown said. “The will to survive in these boys is amazing. I have never seen anything like that.”

In addition to Scammon Bay, groups from Nunam Iqua, Alakanuk, Emmonak, and Kotlik also participated in the search. Hooper Bay and Chevak were available on standby while the U.S. Coast Guard and National Guard provided assistance from the air.

Alaska State Troopers coordinated the statewide effort that brought the four missing boys from Nunam Iqua in from the cold.