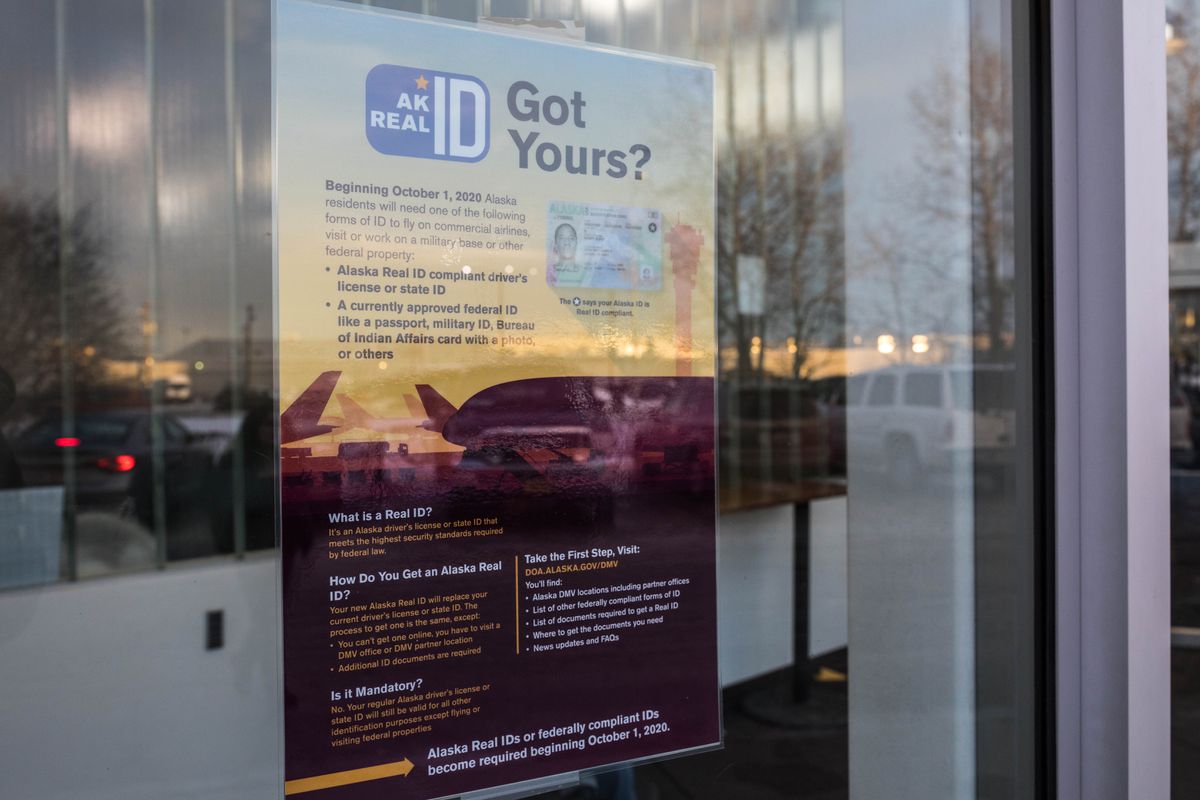 A poster informs people of the availability of the Alaska Real ID on Jan. 2, 2019 at the Anchorage DMV office. (Loren Holmes / ADN)

A poster informs people of the availability of the Alaska Real ID on Jan. 2, 2019 at the Anchorage DMV office. (Loren Holmes / ADN)

The Department of Motor Vehicles plans to continue a pilot program to make Real ID accessible in rural Alaska despite technical challenges and questions over funding that have loomed for months.

The department estimates nearly 7,000 rural Alaskans will not make it to a DMV hub location before the Oct. 1 deadline. Starting that day, traditional Alaska driver’s licenses cannot be used to board commercial flights with federal Transportation Security Administration checkpoints. Other forms of federally compliant ID, including passports and military or tribal ID cards, will still be acceptable.

Officials said last month that many Alaskans already had another form of federally compliant ID.

Commercial airline RavnAir has now offered to “transport DMV workers to and from communities that request the services,” the company said in a prepared statement.

Air travel to a DMV hub community from a village not connected by road can be expensive and time-consuming. The DMV plans to visit Port Heiden, Iliamna, Wainwright, Fort Yukon and Eek.

It’s unclear how many other communities may be part of the effort. DMV Director Jenna Wamsganz said during a legislative hearing last week that communities must request that the department visit to issue Real IDs locally. Wamsganz did not immediately return messages for comment Tuesday.

According to DMV data, about 48,000 Alaskans do not live near a DMV or passport facility. About half of that population is children, and roughly a fifth are expected to travel to larger communities for medical care where they would also be near a DMV location. The department estimated that 6,700 people would not come into contact with a DMV hub during the next seven months.

Several lawmakers questioned which communities were included in the data and worried that the number may actually be higher.

“I want to express concern that 6,700 is a gross undercounting of the real need out there with approximately 200 communities that are not remotely accessible to a DMV, many of which include several hundred residents each,” said Rep. Zack Fields, D-Anchorage.

The DMV initially proposed the pilot program in December, when Department of Administration Commissioner Kelly Tshibaka asked for $60,000 in donations to pay for travel for employees. Officials halted fundraising and told lawmakers last month that there was less of a need for Real ID than they initially believed because of an abundance of alternative forms of federally compliant ID cards.

The department asked tribal organizations or communities to pay for employee travel if they wanted access to the Real ID locally. A visit to New Stuyahok cost the Bristol Bay Native Corp. $1,750, according to a case study on the trip.

The trip was successful, Wamsganz said in the weeks following, but employees encountered significant complications with the mobile machine’s camera. Additionally, 36% of Real ID applicants were turned away because they lacked proper documents. Real ID requires more paperwork than is required for a traditional driver’s license.