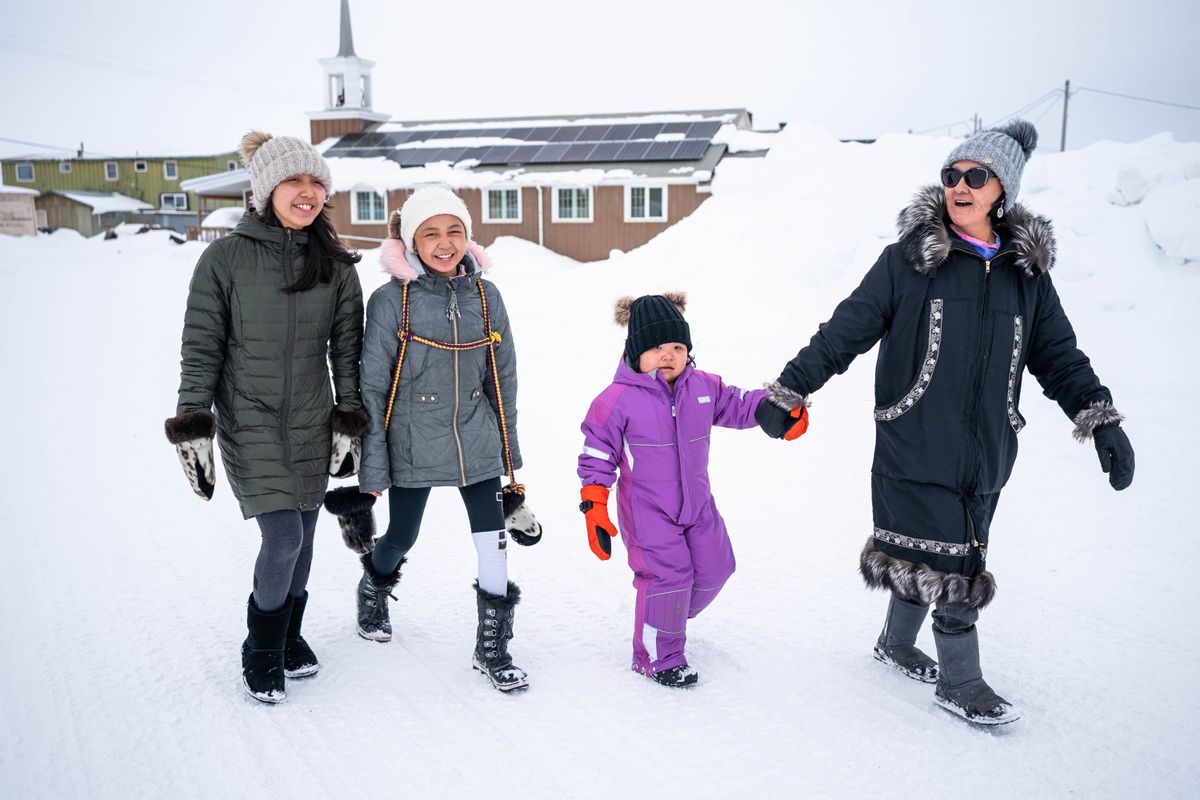 From left, Rebecca Amarok, 13, Bailey Amarok, 12, Karmen Olanna, 4, and Virginia Olanna walk to the store in Unalakleet on Monday, March 16, 2020. Virginia and her family recently moved to Unalakleet from Golovin. (Loren Holmes / ADN)

From left, Rebecca Amarok, 13, Bailey Amarok, 12, Karmen Olanna, 4, and Virginia Olanna walk to the store in Unalakleet on Monday, March 16, 2020. Virginia and her family recently moved to Unalakleet from Golovin. (Loren Holmes / ADN)

UNALAKLEET — Residents zipped around the village on snowmachines and four-wheelers. They stopped in for a few items at the Alaska Commercial Co. They went fishing on the river.

For the most part, Monday afternoon was normal in Unalakleet. But in Alaska’s main population centers, the situation rapidly became less normal.

Just after 10 a.m. Monday, Anchorage Mayor Ethan Berkowitz signed an emergency declaration closing bars, breweries and restaurants for anything but to-go orders. Anchorage residents made a run on grocery stores, temporarily depleting certain items from the city’s cache of food and supplies.

That night, two new coronavirus cases were confirmed in Fairbanks. By Tuesday evening, there were another three confirmed cases in Alaska.

Two hours after Berkowitz’s declaration, Kirstian Haugen ran into Unalakleet’s AC grocery store to use the ATM. She left her Dodge pickup stopped in the street — keys in, engine running.

The village of about 700 people is that sort of place. Everyone waves as they pass on the street, at friends and strangers alike.

[Nome, normally ready for an Iditarod party, prepares for a pandemic instead]

“I think we’re pretty well-protected out here because we are so isolated from the bigger cities,” said Haugen, 21. “I think the state is doing really good to take precaution (against) it spreading to our villages.”

Haugen said other than cleaning surfaces more often, she hasn’t changed her behavior. Because she lives in such a remote place, Haugen keeps a large supply of things like toilet paper, food and hand sanitizer, so there was no need to rush to the store and buy up supplies.

The Daily News talked with more than a dozen people in Unalakleet, and many said similar things. There is concern, people said, but the village is insulated. Plus, many people said they spend most of their free time at home anyway, so social distancing isn’t a change in behavior.

The grocery store remained stocked with most items from Friday through Monday. Most of the toilet paper was bought up, but there were a dozen or so single rolls.

On Friday afternoon, there were even seven, 2-ounce bottles of hand sanitizer in stock, selling for $3.29. A couple hours later, they were all bought up.

Sydney Sarren, cashier at the AC store, said outside of a run on toilet paper and hand sanitizer, consumer behavior hasn’t changed. He said some people have come in every few hours to check and see if those items had been restocked.

[After asking Iditarod to bypass Shaktoolik over coronavirus fears, residents fix up a new checkpoint outside town to shelter mushers]

Across town, another grocery store was sold out of toilet paper and hand sanitizer, but well-stocked on other items.

Some said cities are overreacting, but none complained about the measures the Unalakleet City Council took on Thursday. In an emergency meeting at noon, the council decided to cancel all events surrounding the Iditarod, which brought mushers and volunteers from around the country and the world through town over the weekend.

“Everybody was on the same page in terms of keeping the community safe and protecting our elders,” said Councilman Chris Busk.

He said five of the six council members were there, and around six members of the community. It was an open-forum, collaborative discussion, he said.

A century ago, the 1918 Spanish Flu wreaked havoc on rural Alaska. That devastation is on the minds of some in the villages today.

Yet most around Unalakleet went about their days normally.

Emory College epidemiology professor Jodie Guest, who was in Unalakleet as an Iditarod volunteer, said villages are more protected, but only to a point.

If the virus gets in, villages don’t have hospitals to manage the infection. Anyone with a significant health problem would have to be flown out, she said.

Virginia Olanna, 44, moved with her children to Unalakleet from Golovin, a smaller village up the coast, on Sunday for work. She said there was a bigger support system in Unalakleet than in the smaller villages.

Olanna said she brought what she could from Golovin, but was heading to the grocery store to stock up.

“I’m going to buy cooking flour, disinfectant, paper towels, tissue if there’s any,” she said. “If we go into quarantine and we can’t leave, we need to be ready for that time in our house.”

Ron Pitka, who was going fishing, said the hysteria is over nothing.

“It’s out of hand,” he said, comparing COVID-19 to the flu. While such comparisons have been commonly made, the World Health Organization roughly puts the mortality rate of COVID-19 between 3% and 4%, compared to a 0.1% mortality rate for influenza.

Valerie Anagick, 36, said other than the city council shutting down events, not much has changed.

When mushers came down the river Sunday, village residents still went down to greet them, forming a crowd of about 70 people.

“I think it’s a bit maddening in the Lower 48 and bigger urban areas,” she said.

She said she felt more protected living in a remote place than she would in a city.

In Unalakleet, she said, you know who has left the village for basketball tournaments or vacation. It’s easier to protect yourself.

Anagick, like many others, said she spends most of her time at home anyway. She’s not overly concerned, she said.

Haugen, who was using the ATM, said she thinks it’s been blown out of proportion.