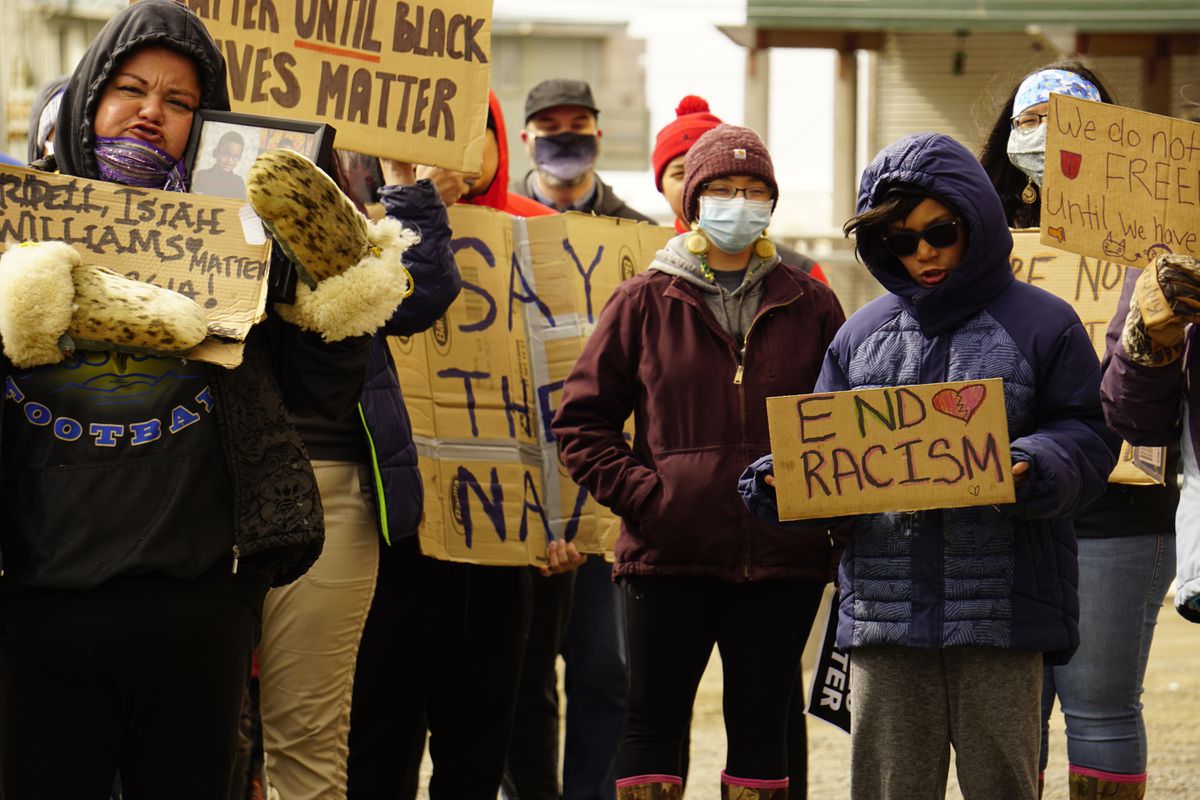 Protesters in Utqiaġvik hold signs calling for an end to systemic racism on Saturday, June 6, 2020. (Photo by Kelly Forster)

Protesters in Utqiaġvik hold signs calling for an end to systemic racism on Saturday, June 6, 2020. (Photo by Kelly Forster)

Dozens of community members across the Arctic made their voices heard during two marches last week — in Kotzebue and Utqiaġvik — in protest of the death of George Floyd and police brutality nationwide and in support of the Black Lives Matter movement.

“I wanted to show that even at the top of the world we see what’s happening and want to be a part of the change,” said Malcolm X. Noble, Qavvik, an organizer of Saturday’s Utqiaġvik protest. “Utqiaġvik has such a diverse population and this community had stories to share when we marched.”

In Utqiaġvik, marchers gathered at the iconic whale bone arch and took pictures with the summer sea behind them.

"The weather was cloudy, damp and windy. Spirits were high. You could feel people coming together knowing they were doing what was right," said Kelly Forster, a marcher. "There were families with young children in strollers, groups of teenagers and most people knew someone else there. (It was) truly a community event."

The group walked from the arch near the Top of the World hotel to the parking lot by the bank. There, speakers stood on a raised walkway and shared words with the large crowd below.

"This is an opportunity to share my opinion to those in my neighborhood about the recent uptick in police brutality against people of color," said Noble, in a speech he'd previously posted to social media. "No amount of memes you scroll will fully illustrate the toll this has taken on people of color such as myself. You may be tired of hearing from me and others like me, but I pray you don't silence them because if we were silent, that would be akin to accepting the oppression that is here today, which was fought adamantly by leaders such as the late Dr. King, Rosa Parks, and Harriet Tubman."

Several of the organizers shared "powerful speeches," said Forster, about discrimination they and their families have faced. Some of the speakers shared about having "the talk" with their children on what to do if they are pulled over or confronted by police.

"To me, this is not political," Noble continued. "If we remove the factor of left (and) right sides, it comes down to this: the people we entrust to protect us do not protect us. I am a human who does not wish to feel inferior or endangered by simply existing. We have problems in our backyard with our neighbors; we need to fix that."

[At large Palmer rally, demonstrators call for unity and stamping out racism in local communities]

In the crowd, people held up handmade signs that read "Justice for George Floyd" and "Say Their Names," referring to the names of people of color killed by police.

“Supporting and showing up to the rally in town was something I will never regret,” said resident Robert Villalon. “Bringing my son and his friends, educating them, is something I hope they remember in life. I wanted to show them we alone are just rocks, but together thrown in the ocean, we make ripples. With the focus for true justice and equality for our Black Lives Matter family — I know our voices were heard.”

As Noble spoke, the crowd responded with cheers and support. When he raised his fist in the air, a symbol of solidarity, the crowd responded. One by one, people raised their fists with him. They then held an eight-minute moment of silence to commemorate the amount of time a police officer pinned George Floyd to the ground.

“It was a moving moment,” said Allie Akpik, one of the marchers. “It was filled with such healing energy and emotion. We sang, we prayed, we stood in silence and we chanted for all the black lives who have been treated unequal. We prayed for the end of police brutality for all people of color as well as for our own people who have been treated unjustly by police. There is a healing movement going on across the world and we surely stand with it up here at the top of the world.”

Across the Arctic, in Kotzebue, locals turned out on June 2 in the same fashion to protest police brutality. Residents walked through town, carrying signs and chanting “No justice, no peace.”

“Holding a protest in Kotzebue, Alaska sends the message that we see the oppression faced by black people in America,” said resident Hannah Atkinson. “I see it, I am not OK with it, and I have to do everything in my power to fight against it. It is also important because I want black people in Kotzebue to feel seen and supported.”

Racism knows no boundaries, organizers said. Black residents have been victims of racial slurs and prejudice in town. Helping them feel empowered, welcomed and safe in Kotzebue was something they said they hoped would come from the rally.

“I felt like bringing awareness to the Black Lives Matter movement was needed in Kotzebue. We have black citizens here and I wanted them to know that we stand by their side against police brutality and racism,” said organizer Stepheena Smith. “Seeing videos circulating online of black people being killed in broad daylight was something that really pushed me to want to make it happen.”

Up north, in Utqiaġvik, residents shared similar stories of why actions like these are needed at a local level — not just a national one.

“My husband is black and I’ve seen how people treat him differently, and how he has to change up when someone sees him as a threat for being a tall black man,” said I?uuraq Edwardsen Moss. “When I watch the news and see how black men and women are being murdered by law enforcement or people of privilege, it makes me enraged. When they don’t get justice, it makes me sick to my stomach. We need greater awareness. We need real change.”

"These issues do not just occur in big cities," said Forster. "It is important for everyone to speak up for what is right. Utqiaġvik has as many reasons as anywhere else to be part of this movement."

Before the Kotzebue rally, Smith had posted on social media that she wanted to put together a march to address these issues locally.

"Spreading awareness on Facebook and Twitter wasn't enough for us so planning this protest was one step forward," said Smith.

Fellow resident Camille Nelson stepped up and set a date and time. Together, they made it happen.

Nelson said it's important for people to use their voices to speak out against injustices and take a stand when action needs to happen.

Now, the pair is working to raise awareness in other ways, as well. They are gathering petition signatures around town in an effort to effect change.

"Yes, protesting along with donating and petitioning is pushing along the movement," said Nelson. "A lot of them are similar stories, but with different faces. A number of deaths have occurred by the hands of police without any charges. The petitions are to hold police accountable for their actions. There are also some that call for cases to be re-opened where the killers were acquitted."

Back in Utqiaġvik, Noble finished his speech and other speakers stood up to share their stories.

Looking ahead, he said he hoped people would seek out resources to continue the conversation and pointed to a list of demands from the NAACP and others. With regard to police action, they include a full demilitarization of police, the establishment of a police oversight committee, the enacting of universal training standards for police, requirements that officers be licensed, and the repeal of the law that protects police officers from being sued. They are also calling for a ban on the use of knee holds and choke holds, ensuring every state's open records act includes officer misconduct information, the implementation of citizens' review boards, and a clear use of force outline with many steps for officers.

"From what we can do here," Noble said, "is talk to those around us since racism is taught, not inherent."

Residents of both Kotzebue and Utqiaġvik say they hope their actions will lead to positive outcomes for their communities and the generations to come.

For Noble, he said he was moved by the amount of support he saw at the northernmost rally in the U.S. It may have been remote, but it was no less meaningful or powerful than any other in the nation.

"It was overwhelming with love," he said. "I wasn't fearful about protesting and couldn't get over how much joy it brought me to see so many familiar faces, but also strangers."