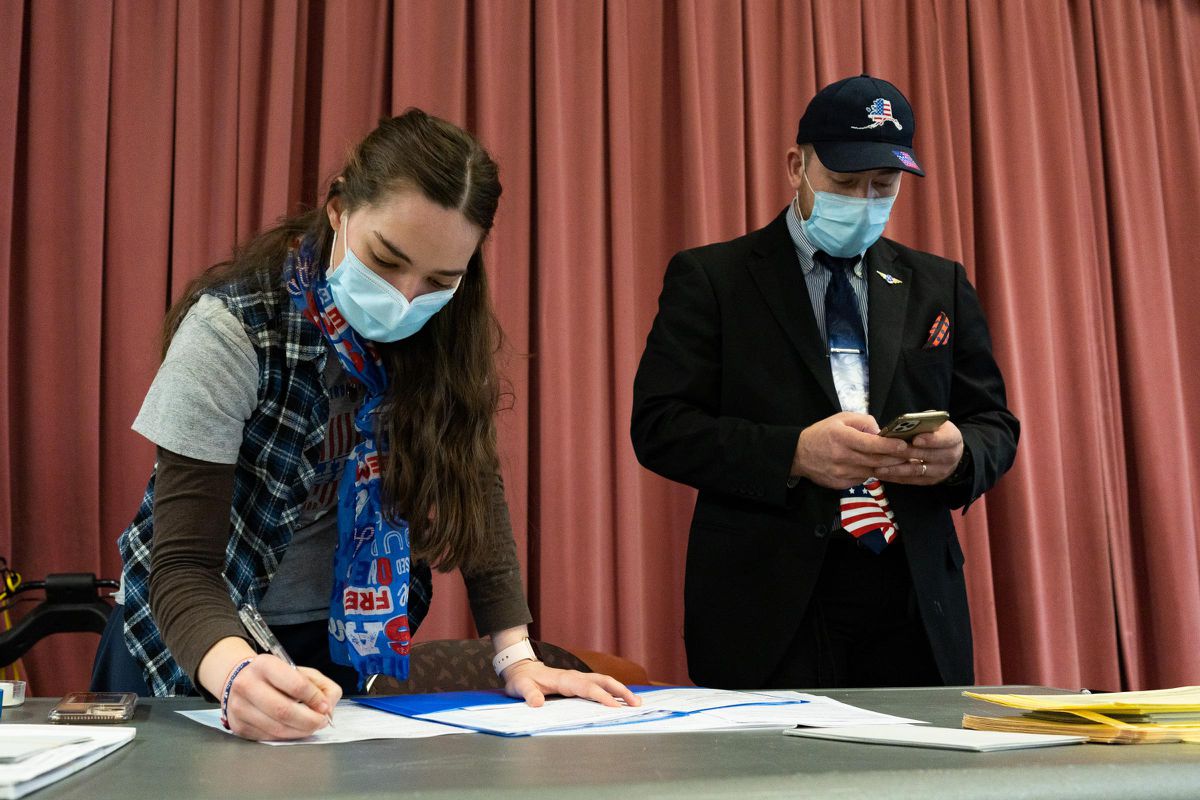 This story originally appeared on KYUK and is republished here with permission.

On Election Day, Nov. 3, Bethel was short on poll workers. Teddi Worrock manages the building where the elections took place, and she stepped in to help monitor the front door. Shortly after the polls opened, a voter told her that a vehicle in the parking lot was decked out in campaign material.

“I went outside to look, and yep, there was his car, right underneath our lit-up sign with all his Trump regalia,” Worrock said.

The vehicle was a bright yellow truck belonging to elections chairperson Job Hale.

“He has two Donald Trump flags, an American flag,” Worrock said. “He’s got all his Trump hats in his dashboard, multiple bumper stickers all over his truck.”

The truck clearly belongs to Hale. It has his name on it. Signs on both sides of the truck advertise his general contracting business “Job’s Done Right,” a play on his name.

Worrock asked Hale to move his truck. She said that his wife Bethany, who was also an elections worker, moved it across the street, still in clear view of the polling site.

After the sun came up, another voter told Worrock that there was more campaign material in the parking lot.

“He had actually gone on our light poles and posted several Trump flags and posters on those,” Worrock said.

Hale told KYUK that he hung the flags the night before Election Day. Worrock removed one of the flags and got Hale to remove the others.

Worrock then called Hale’s regional elections supervisor, Angelique Horton, in Nome to explain the situation and to get approval for calling the police to escort Hale from the polling place. Worrock said that Horton gave her that support. However, Horton then spoke with the other poll workers and learned that none of them were willing to take over as elections chair. Without a chair, the polls would shut down. After police arrived, Horton no longer supported removing Hale from the polling place, and the police said that Hale had not broken any laws.

Bethel Police Chief Richard Simmons said that usually officers would remove an unwanted person from a building at the request of the building manager. But with no laws broken, Simmons wrote in an email that “the polling official had a greater right to be at the polling place, and the community had a greater need for him to keep the polls open.”

On Election Day, Hale maintained that he didn’t do anything wrong since the campaign materials were past the 200-foot boundary.

“I just removed them to make peace and not cause trouble, because I’m definitely not here to cause trouble,” Hale said. “I’ve been around town standing up for Trump and wanting my voice to be heard as well.”

When asked if he thought it was appropriate for an elections official to display campaign material around a polling site, Hale responded, “I’d rather not answer that.”

KYUK asked Horton, the regional elections supervisor, if any of Hale’s partisan displays before or on Election Day were inappropriate. She did not answer directly either.

“There is no prohibition against poll workers engaging in political activity when off-duty and away from the polls,” Horton wrote in an email. “In fact, the statutes intend for politically active people to participate as poll workers.” When asked if it was inappropriate for Hale to post campaign material in the polling location parking lot, Horton wrote, “State law only address political persuasion during the hours the voting location is open for voting. State law prohibits political persuasion within 200 feet of any entrance to the polling place.”

Both Job and Bethany Hale’s support for Trump was well known in Bethel. The Saturday before the election, Job and Bethany stood on Watson’s Corner, Bethel’s busiest intersection, waving Trump flags and wearing Trump hats. The day before the election, they posted a video of the polling site to Bethel’s community Facebook Page “It’s Going On In Bethel” with a note encouraging people to come vote. Attached to the post, their joint profile picture showed Job and Bethany Hale’s faces over a banner saying “Trump 2020.”

Comments on the post objected to Job and Bethany Hale showing partisanship in their role as election workers. The objections continued on Election Day with Hale’s campaign displays.

“That’s completely unacceptable. Whoever would do something like that should be dismissed immediately,” said Mark Jones, former Bethel elections chairperson for Precinct 2. Jones stepped down from the position this year to avoid crowds during the coronavirus pandemic. He’s concerned with the ethics of what Hale did.

“That is obviously partisan activity, which is completely against what we expect of poll workers, chairpersons. That is completely out of line,” Jones said.

Judy Andree agrees. She’s the president of the League of Women Voters of Alaska, a nonpartisan group that promotes voting and civic participation. She calls confidence in the integrity of the voting system “the foundation stone of our democracy,” and that Hale’s actions endangered that foundation.

“If you blur the line between a polling place official and a campaign worker’s efforts,” Andree said, “then you risk losing the voting public’s confidence in the integrity of the process.”

That confidence was shaken. Several members of the public contacted KYUK to ask if the Bethel votes would be counted accurately, concerned that they would be manipulated in favor of the chairperson’s preferred candidate. However, there has been no evidence of voting interference or manipulation at the Bethel polls. Unofficial results from Bethel show President-elect Joe Biden leading.