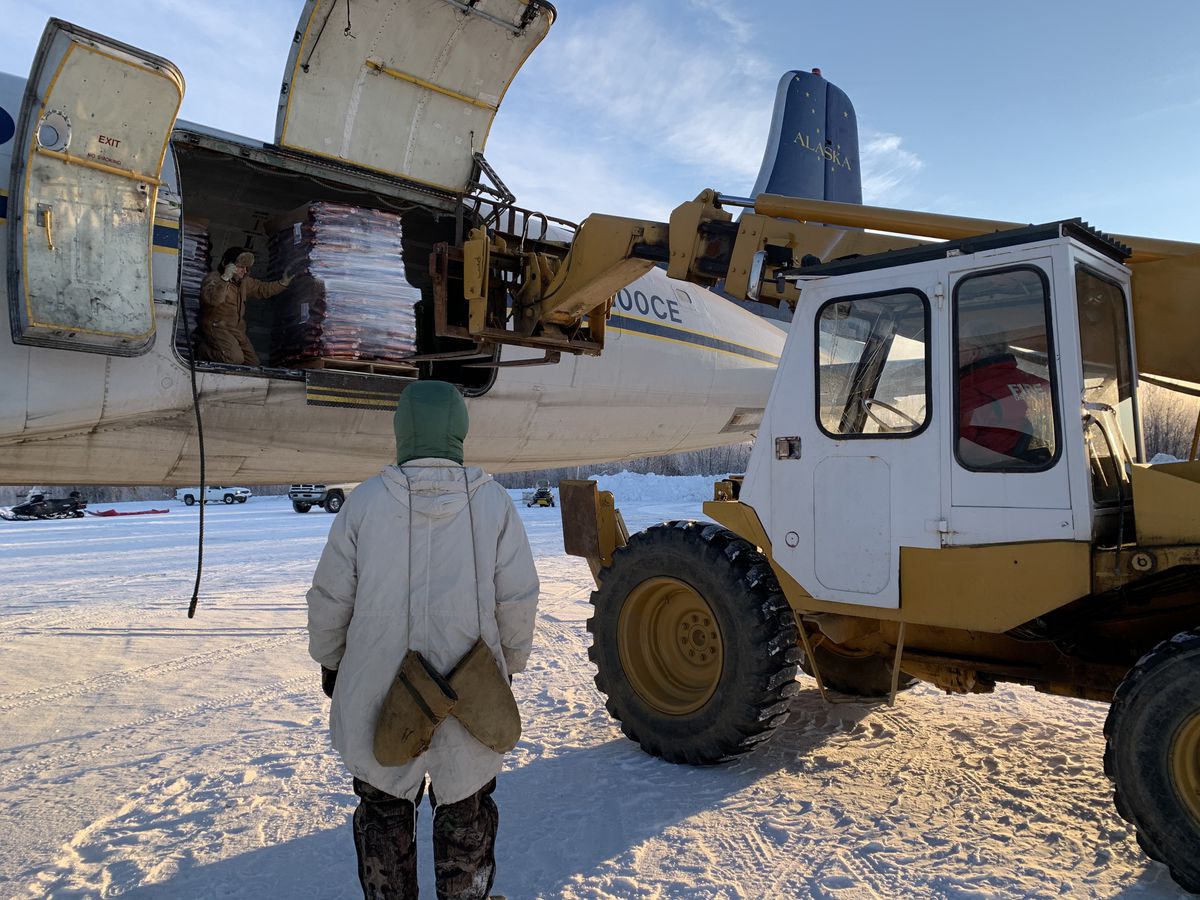 A donation of 39,000 pounds of dog food from Purina arrives in Tanana in November 2020 to help feed sled dog teams through the winter. Many mushers rely on chum salmon to feed their sled dogs all winter, but they were cut off from subsistence fishing this year due to poor salmon runs. (Courtney Agnes)

A donation of 39,000 pounds of dog food from Purina arrives in Tanana in November 2020 to help feed sled dog teams through the winter. Many mushers rely on chum salmon to feed their sled dogs all winter, but they were cut off from subsistence fishing this year due to poor salmon runs. (Courtney Agnes)

Interior Alaska musher Pat Moore wasn’t sure how he would keep his 30-plus sled dogs fed past Dec. 1, when he predicted the kibble would run out — food that he and his daughter managed to purchase after selling some household items, arts and crafts and scraping together the last of their money.

Moore lives in Tanana, a small community on the Yukon River, and he feeds his sled dogs chum salmon to get through the long winters.

Though mushing has declined with the rise of snowmachining, thousands of sled dogs and numerous teams still live in communities throughout the Yukon River drainage, where mushers are struggling to find ways to feed their dogs after disastrously low salmon runs this year.

The Alaska Department of Fish and Game stopped subsistence fishing for fall chum salmon in some Yukon River areas, and Moore was cut off entirely from fishing for the main ingredient in his dogs’ food.

But help recently arrived for Moore and other area dog mushers.

Over the last week, nearly 40,000 pounds of high-protein dog food, donated by Purina, arrived by cargo plane to mushers in Tanana and Fort Yukon. The donation was prompted by the efforts of Stephanie Quinn-Davidson, the director of the Yukon River Inter-Tribal Fish Commission, who is also married to Anchorage’s acting mayor.

Now, Moore said he thinks he might have enough food for his dogs to make it through April.

After several mushers contacted the commission about their plight and asked for help on social media, Quinn-Davidson organized an online effort to help them. So far, the campaign has raised over $32,000 plus the 39,000-pound donation from Purina.

Quinn-Davidson and regional experts worry that it won’t be enough, however. This year’s poor salmon run affects more than just the mushers, who are often integral components of the subsistence economy of entire communities.

“It’s a tradition, a culture that’s been passed down for years, and without being able to feed these dogs this winter, there’s some mushers who are going to have to sell them or give them away, or worse,” Quinn-Davidson said.

A bad year for salmon

Normally each year, Moore cuts and hangs about 1,200 salmon on a rack. Those last his dogs from April through about July 1.

He also catches between 2,000 and 3,500 fish and “cribs” them, fermenting them outside until they freeze. Then he “stacks them like firewood,” he said.

“They stink to high heaven,” he said, “but the dogs love them.”

Those are the fish that usually last his dogs through the winter. He also mixes in other ingredients — to the tune of 3,000 pounds of kibble, 3 gallons of supplemental oils and 1 ton of red meat over the course of a year — but their main diet is the fish.

This year, he has none.

The area has experienced a decline in king salmon runs, a primary human food source, for over a decade, Trainor said.

“It was a double whammy. They got hit twice,” Trainor said. “So it creates a food insecurity issue for humans and for dogs, but dogs are part of what we call the subsistence economy.”

People use the dogs for other subsistence activities throughout the year, like trapping, hunting and harvesting firewood. Their mushers also have the gear, time and processing ability to catch and share fish with other families in their communities. Families often rely on the mushers for salmon and other subsistence goods.

Trainor said that efforts to declare a the fall chum run a disaster are underway, but it’s a slow process. Historically, only commercial fishermen have been compensated for their lost incomes, which does little to help the subsistence-based communities “who are struggling under the pressures of collapsed salmon runs,” she said.

For David Walker, mushing is a way of life — and a superior form of transportation — that has slowly slipped from prevalence in the village of Holy Cross, where he lives.

Sled dogs communicate with mushers, alerting them to nearby animals when their ears perk up, he said. And as long as they are well-fed, they can run when a snowmachine won’t, he said.

“It’s just a better way to travel,” Walker said. “You really get to know for yourself around the dogs. No noise from snowmachine engines.”

He’s currently awaiting a donation of food purchased by Quinn-Davidson’s fundraising efforts. Walker usually has freezers filled with fish scraps to last his dogs through the winter, but for now he’s relying on the dog food he could afford to purchase online. It’s not as nutritious and high calorie as his dogs need, though: They require the good calories from salmon to really run hard, he said.

Quinn-Davidson is using the money raised to purchase and ship dog food to remote communities and mushers like Walker. The cargo is the most expensive part — it’s costing nearly $5,000 to ship 100 bags of dog food to Huslia.

But she’s getting more and more inquiries from mushers in need and has a running list of people to help. One musher told her they will have to take out their retirement funds to get their dogs through the winter, she said.

In Tanana, Moore and his daughter are now trying to sell most of their dogs, including his racing team. Keeping them has become too difficult and Moore is getting older, he said.

“I tell myself that I’m not going to miss it, but I think I probably will,” Moore said.

Moore recalls previous years when salmon runs crashed. They got through it then, but there were more mushers and strength in numbers, he said.

“I don’t think that this is the end of the dog team culture for this area by any means,” said Trainor, the subsistence resource specialist. “It just is a really terrible low point, and hopefully people will be able to pull together and get through it as best they can.”