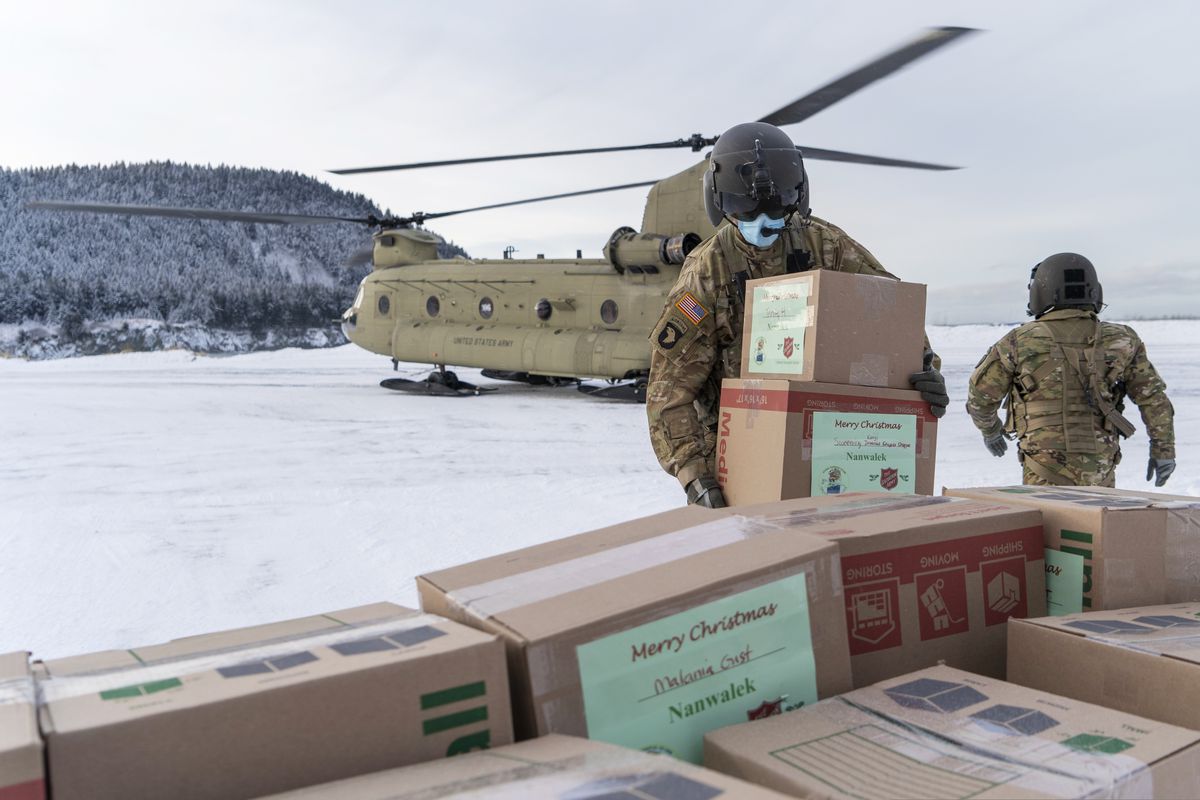 On a tiny speck of a frozen runway on the north bank of the Yukon River, nearly a hundred miles northwest of Fairbanks, Christmas was delivered in a most unusual way.

An Alaska National Guard helicopter descended through a rotor-whipped cloud of snow in Stevens Village, a tiny community of about 30 people. Townspeople rushed to the airstrip on their snowmobiles after seeing the helicopter land and then watched as Guardsmen wearing flight helmets unloaded boxes containing wrapped gifts for just about everyone in the community.

Then they flew off.

This year’s edition of Operation Santa Claus didn’t have the pomp and grandeur of previous incarnations, but the mission of delivering gifts here and two other largely Alaska Native villages was completed with COVID-19 safety precautions in place.

“And I will tell you, COVID is rough,” he said, “but it will not stop us from carrying out this tradition. It is an honor to do it.”

Operation Santa Claus was born out of hard times in 1956, when residents in the village of St. Mary’s faced a tough choice: food or gifts for the children after flooding, then drought, devastated subsistence activities. They chose food.

The Alaska Air National Guard then stepped in, delivering donated gifts and supplies to the community,

Since then, the program has grown, and in 1969, The Salvation Army became a partner in providing toys and other items to children across rural Alaska.

Each year, Operation Santa Claus attempts to deliver gifts to two or three villages that are selected for varying reasons, such as having a particular hardship in the last year or high poverty levels.

More than 90 villages have hosted Operation Santa Claus since St. Mary’s. Stevens Village, and the other two selected this year, Birch Creek and Nanwalek, were first-time participants.

In a normal year, the arrival of Operation Santa Claus is a community event, with locals driving Santa and Mrs. Claus and helpers in the back of pickups or on sleds pulled by snowmobiles to the local school for a party. All village residents are invited to have their photos taken with Santa and eat an ice cream sundae, and children get a gift.

But during the pandemic, COVID-19 protocols dictated the gifts be delivered to airstrips, where locals picked up and distributed them.

Stevens Village First Chief David Kriska said having the National Guard call and see if they would be interested was reassuring.

“It was great because just being so locked down and with travel, you know, so out of touch with the outside world,” he said. “Having someone that even reached out and wanted to do something like that was like, ‘Whoa, hey, awesome!’”

However, he wishes it could have been the full experience, including having his children sit on Santa’s lap.

“It would have been great for my kids to interact with them because they’re needing that social interaction,” he said. “I would have loved to have that picture with my daughters.”