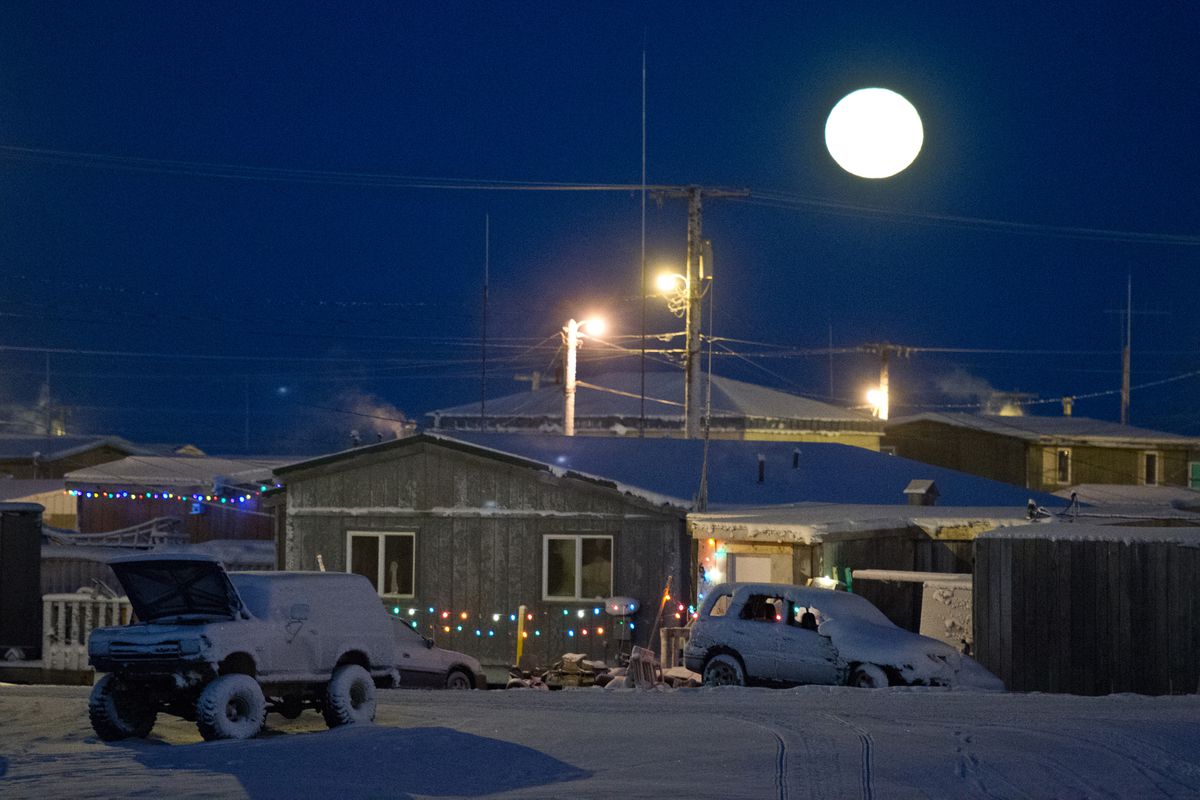 A full moon adds to the residential lights in Utqiagvik. Strings of lights and Christmas decorations adorn many homes and streets in Utqiagvik, adding a sparkle to the darkest time of year in this Arctic community. (Marc Lester / ADN file)

A full moon adds to the residential lights in Utqiagvik. Strings of lights and Christmas decorations adorn many homes and streets in Utqiagvik, adding a sparkle to the darkest time of year in this Arctic community. (Marc Lester / ADN file)

Short staffing and restricted window hours at the Utqiaġvik Post Office have made the wait to send or receive packages this holiday season a health concern, residents say.

“When you go to the post office during the hours from 2 to 5, there’s like 25 to 50 people in line trying to get their Christmas supplies,” North Slope Borough Assembly member Doreen Lampe said in a special meeting Monday. “The line is not 6 feet apart and there’s some people that go in without a mask. This is a central community location and I was kind of scared standing in that line.”

Window hours for package pickup were reduced this month when at least one postal employee was sickened by COVID-19, according to one employee’s post on Facebook.

“We are in a situation that we need to cut the window hour due to short staffing because of COVID,” he wrote on Dcc. 7. “In order for you to get the yellow slips and mails my crew and I are rushing the mail in the back during those closed hours. Thousands of parcels everyday with only few people working in the back.”

Some residents, frustrated by the health risk and the lack of support from the federal government, sought help from Alaska senators.

“I wrote (Murkowski) a letter basically stating that our postal workers need help,” Calderwood told The Arctic Sounder. “They work hard, they’re putting themselves at risk. The public and community are putting each other at risk by being crowded in that lobby.”

He said he also addressed the “chronic problem” of understaffing at the post office. On Monday, Calderwood received a call back from an employee at Sullivan’s office.

“She said that Sen. Sullivan’s office understands how important the post office is to Alaska, and they want to get a resolution to the safety and staffing concerns,” Calderwood said.

There are just a handful of employees at the Utqiaġvik post office. In September, Endrea Morlock of Cincinnati, Ohio, was hired to fill the postmaster position made vacant weeks earlier. At the time, Morlock said one of the major challenges at her new position was mail volume.

Calderwood was told by staffers in Sullivan’s office that there are no spare postal workers to send to Utqiaġvik because they are all dispersed to communities that would otherwise be totally shut down due to COVID-19. Calderwood wondered if it was possible to let the workers work overtime on Saturdays.

A few hours later, by luck or as a result of the call, the Utqiaġvik Post Office posted new holiday hours, extending parcel pickup time Monday through Friday and adding new hours Saturdays.