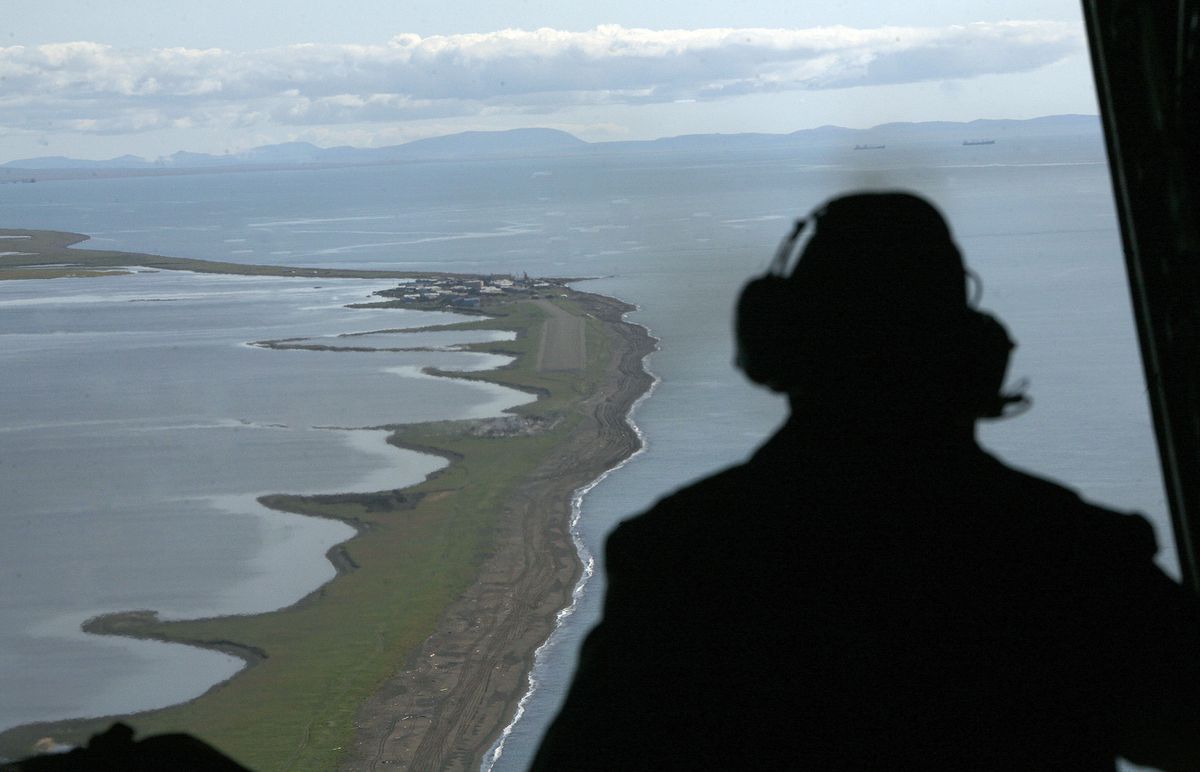 A U.S. Coast Guard aviator surveys the coast near the village of Kivalina during a surveillance flight in the Alaska Arctic, where sea ice has been disappearing much earlier than usual in the spring. (AP Photo/Al Grillo, File)

A U.S. Coast Guard aviator surveys the coast near the village of Kivalina during a surveillance flight in the Alaska Arctic, where sea ice has been disappearing much earlier than usual in the spring. (AP Photo/Al Grillo, File)

The 2020 Arctic Report Card, released this month by 134 researchers across Arctic nations, tells a story of change on sea and land. The past year was the second warmest in the Arctic region on record, with the second lowest sea ice extent.

Rick Thoman, climate specialist at University of Alaska Fairbanks who served as the lead editor of the report card, said neither fact came as a surprise based on the trend from years prior.

Extreme wildfires in 2020 in the Sakha Republic of northern Russia coincided with unparalleled warm air temperatures and record snow loss in the region.

Though the Alaska Arctic showed less of a departure from normal than Siberia did, Thoman said it varies year to year. Last year, 719 wildfires burned throughout Alaska, according to the report.

“If it’s not Alaska, it’s Siberia, or it’s Greenland, or it’s Scandinavia, or the Russian European Arctic,” he said. “At this point, it’s always somewhere. It varies year to year based on variations in the jet stream and in ocean currents.”

Thoman said the biggest takeaway from this year’s Arctic Report Card is this: “We’re in the process of transitioning to a warmer, less frozen, biologically changed Arctic. Your granddad’s Arctic isn’t coming back,” he said. “We need to figure out how to live in the in the world we’ve got.”

In the warmer, more ice-free Bering, Chukchi and Beaufort seas, biologists point to the bowhead whale as a symbol of resilience and adaptation.

“You hear the term winners and losers with climate warming. I don’t really care for those terms, but I think they do capture, in a very general sense, what’s going on,” George said.

He said the evidence to date has shown that ice reduction has provided some benefit to the species. Warming waters allowed for more prey production and access to expansive feeding areas previously off limits due to heavy ice in the Canadian Arctic.

“That’s a little counterintuitive for many of us that thought of them as an ice-dependent species,” George said.

While George acknowledged that the Bering-Chukchi-Beaufort population of bowheads has done well over the past five decades, he emphasized there’s no telling what the future might hold.

The population of bowheads was nearly depleted in the early 1900s from commercial whaling — numbering as few as 1,000 animals — according to North Slope Borough wildlife biologist Robert Suydam.

Since then, the population has steadily increased. Last year, whale counters on the ice edge in Utqiaġvik estimated 14,000 bowheads passed, though Suydam said that number ins’t entirely accurate. For a better population estimate, he points to 2011 data that counted 16,800 whales.

Though a reduction of sea ice has benefited the whale population in some ways, it’s hurt biologists’ ability to count them.

“It’s becoming more and more of a challenge for us to actually have a team out on the ice throughout the migration period to count whales,” Suydam said. “So even though the bowhead population, by all information that we have, shows that they’re doing well, it’s harder and harder for us to document that.”

Though the 2020 Arctic Report Card was not able to incorporate Indigenous knowledge due to COVID-19 restrictions, Thoman, George and Suydam each stressed the importance of collaboration with local hunters and knowledge holders.

“Long-term and effective conservation of the species can’t occur unless the user groups and the science is on the same page,” George said. “You have to have (them) playing from the same sheet of music if you really want to serve and protect an animal.”