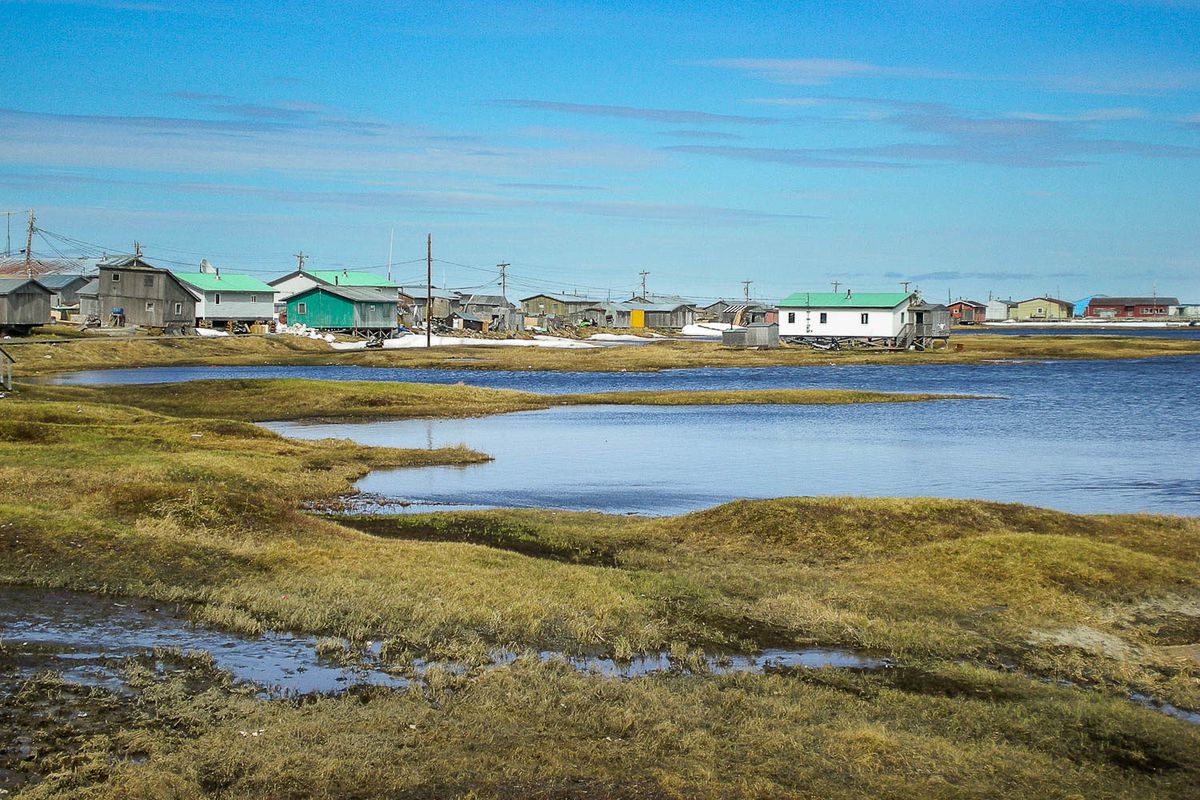 This story was originally published on KYUK and is re-published here with permission.

The COVID-19 pandemic has not put a pause on the Yukon-Kuskokwim Delta’s environmental threats.

In Chefornak, a family was forced to evacuate their home because a “sinkhole” caused by thawing permafrost formed underneath it. That family had to move into a building intended to be a quarantine facility.

Delores “Dolly” Abraham’s original fear was not a sinkhole, but the river. By last spring, she said, erosion on the riverbank in Chefornak had almost reached the edge of her home.

With help from her village, Abraham planned to move her home to a safer location. But when contractors came to begin the process of moving her house, they found a bigger problem than the river: There was a 4- to 6-foot-deep sinkhole underneath her home.

“I got scared. I didn’t want to live in there anymore,” Abraham said. “And the house, when we went in the house it shook a little.”

Because of the unstable foundation, contractors told Abraham that her home could not be moved and had to be condemned.

This is not the first sinkhole to appear in Chefornak in recent years. Mayor Anna Abraham said that a few years ago, a man fell into a mud-filled sinkhole while walking with his 2-year-old daughter.

“He fell above his waist area, and he wasn’t able to feel anything underneath,” said the mayor.

The man put his daughter on his shoulders, yelled for help, and was assisted out of the hole by neighbors.

Permafrost is thawing in communities across northern Alaska, but Chefornak’s situation is a little unique. Torsten Mayrberger, who has a doctorate in geotechnical engineering, said that you can trace the sinkholes back to a volcano 4 miles south of Chefornak that was active long ago.

“If you go into Chefornak itself, there’s boulders everywhere,” Mayrberger said. “And those boulders are from the volcanic eruption.”

Mayrberger works for PND Engineers, which is partnering with the Alaska Native Tribal Health Consortium to help Chefornak with its environmental threats. He said that these volcanic boulders make up a lot of the permafrost in Chefornak. In between the boulders is silt or mud. When the icy silt between the boulders melts, it can create pockets of unstable ground that people call sinkholes— though Mayrberger said that’s not very accurate description.

“It’s not a hole at all. It’s just soft soil that’s not draining. It’s just mud. It’s like, you know, the quicksand that you see in the old movies,” Mayrberger said.

Antrobus said that those other drivers of melting permafrost could be foot traffic, the heat that comes out of buildings, or even how the water drains in those communities.

“I think it’s important to really evaluate that and determine what the drivers are. If we assume it’s simply climate change, and we move to a new location and we repeat our same building practices, then we’re likely to see the same results,” Antrobus said.

Mayrberger, the geotechnical engineer, agrees with Antrobus. He’s helping Chefornak plan a new subdivision to replace some of the buildings threatened by permafrost degradation, erosion and flooding. One of Mayrberger’s ideas to avoid these problems in the future is to build 10-unit townhouses so that there are fewer structures emitting heat into the permafrost.

“The smaller footprint of your urbanized area, if you will, the better,” Mayrberger said.

While these longer-term plans are in progress, there are emergencies already at hand. When the sinkhole under Abraham’s home was discovered, her family became homeless. They bounced around with other family members until moving in with Abraham’s son.

“Due to the overcrowding of one residential home, trying to limit the exposure of COVID to spread in our community, we had decided to put her in there,” said the mayor.

Abraham said that she’s thankful for her temporary residence, but she’s hoping to be back in a home that’s hers. She’s applied for a federal grant that could build her a new house by 2023.