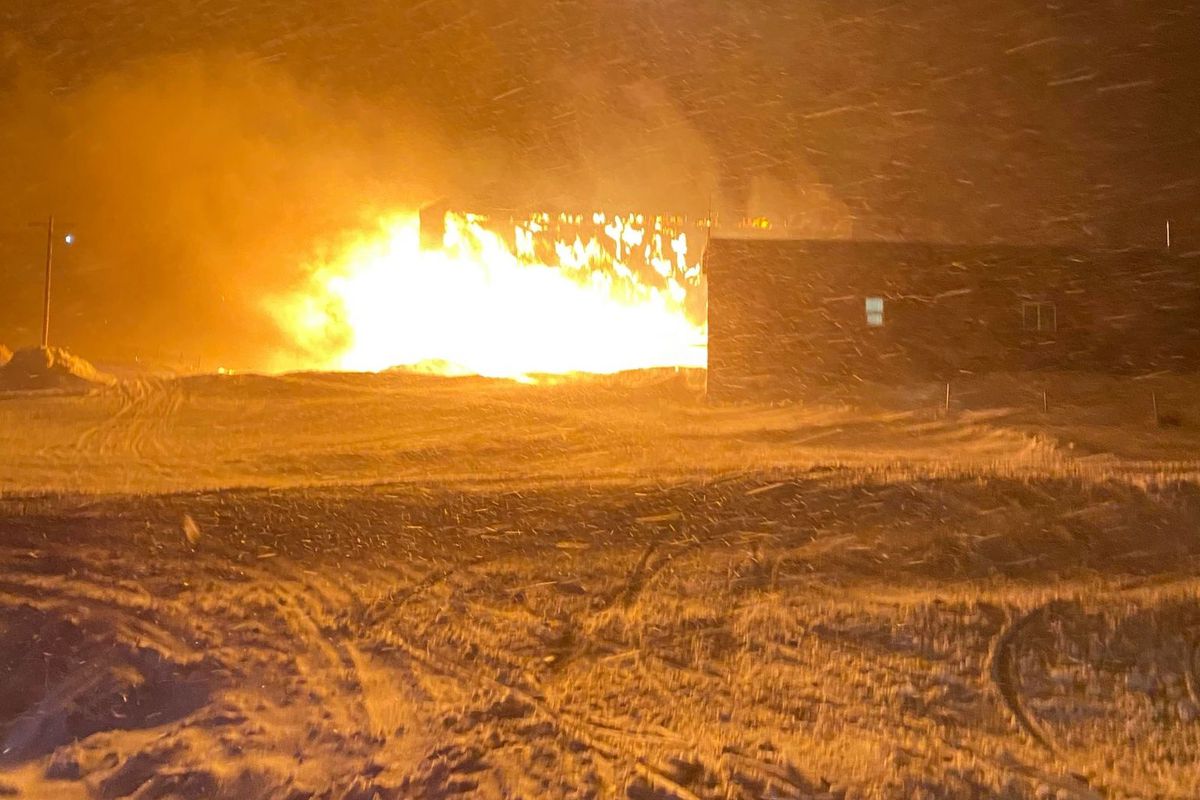 A fire destroyed the former school building in Chevak on Monday, causing power outages and leaving some homes without water and sewer. Two men have been missing since the blaze. (Photo by Gretch Chayalkun)

A fire destroyed the former school building in Chevak on Monday, causing power outages and leaving some homes without water and sewer. Two men have been missing since the blaze. (Photo by Gretch Chayalkun)

In the early hours of Monday morning, flames began pouring out of the abandoned school building, Alaska State Troopers said in a statement. The community of just over 1,000 people does not have a fire department and the building was a total loss.

Gretch Chayalkun said she’d fallen asleep Sunday night and woke in the middle of the night to news that the building was on fire. She said she hopped on her snowmachine and headed toward the building, where the blaze had illuminated the night sky orange. Thick smoke hung in the air, she said.

When Chayalkun saw the flames, she said her mind quickly jumped to her older brother.

Dennis Slats, 35, had left Sunday evening with one of his brothers and headed toward the store on an ATV, Chayalkun said. He’d hopped off near the school, which Chayalkun said is the last time he was seen.

She headed to the home of his boyfriend, James Tikiun, but neither of the men were there and Chayalkun said Tikiun was unaccounted for as well.

“Majority of the town’s people were outside watching, and I was riding around on my snowmachine hoping I’d see them out watching, but I didn’t see them and the weather got ugly,” she said.

Heavy, wet snow began to fall and strong winds pushed the flames away from the town. No other buildings were damaged by the fire. Troopers were not able to reach Chevak on Monday because of blizzard conditions and strong winds, spokesman Austin McDaniel said by email.

Chayalkun said she’s worried her brother and Tikiun may have been under the old building — in a place where they sometimes hung out — when the fire started. Troopers and deputy fire marshals reached the town Tuesday to investigate the scene.

“Due to the extent of the damage and size of the building, at this point, no human remains have been located at the fire scene,” troopers wrote Wednesday afternoon.

Chayalkun said a small search was organized Monday afternoon, but she wants others to continue looking for Slats and Tikiun.

The fire caused a power outage, which froze several individual water and sewer lines throughout town, according to John Nichols, director of the Alaska Native Tribal Health Consortium’s Rural Utility Management Services. Power had been restored by Wednesday, but the water and sewer mainlines near the old school were damaged by falling debris, he said.

Water plant operators and a remote maintenance worker were making repairs Wednesday despite difficult weather conditions, according to Nichols. Nine homes past the damaged portion of the pipes will not have water or sewer service until the repairs are finished, which Nichols said is expected to happen Friday as long as the weather permits. The additional frozen lines will be thawed after the repairs to the mainlines are completed, according to Nichols.

The cause of the fire is under investigation.